Cinnamon Bun is a Candy Person in Adventure Time. Prior to the events of "The Red Throne," Cinnamon Bun was very dim-witted and clumsy, even when compared to most residents in the Candy Kingdom. However, after being "baked" in the same episode, he becomes more intelligent and articulate in his manner of speech. He is currently Flame Princess' champion and knight and resides with her in the Fire Kingdom.

Before his change, Cinnamon Bun is shown to be dim-witted and somewhat childish in his behavior. He has a short attention span and has difficulty concentrating on even simple tasks. He is often oblivious to situations around him regardless of their importance or severity. Cinnamon Bun often plainly speaks about what is on his mind, giving him the impression of an honest individual and later in the series he got smarter after being completely baked after getting hit with a fireball. 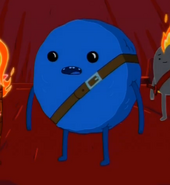