Ice Fairy of the Lake

As a fairy maid:

Playing games and pranks
Freezing frogs and watching them thaw

Attack Reimu and Marisa out of instinctive aggression (Embodiment of Scarlet Devil; succeeded)
Attack the heroines just because they were there (Perfect Cherry Blossom & Double Dealing Character; succeeded)
Freeze and play with the flowers; play games for fun (Phantasmagoria of Flower View; succeeded)
Defeat the Daidarabotchi so she doesn't have to be afraid of anything (Unthinkable Natural Law; interrupted)
Get revenge on the Fairies of Light because they destroyed her house (Strange and Bright Nature Deity; succeeded)
Prove she is the strongest (Fairy Wars; failed)
Convince Aya Shameimaru to make the details of her article different (Bohemian Archive in Japanese Red; failed)
Join the Three Fairies of Light on their pranking adventures (Strange and Bright Nature Deity & Oriental Sacred Place; succeeded)
Get money out of selling water-flavored shaved ice (Oriental Sacred Place; failed)
Capture Seija Kijin (Impossible Spellcard)

Cirno is an ice fairy and described as a weak boss in the Touhou Project series. If people consider the power of average fairies as common enemies, they can certainly say she is exceptionally strong for her kind. Her personality is childish, as you might expect from her appearance, and she is sometimes considered stupid.

In the events of Embodiment of Scarlet Devil, she attacked the playable character, who was just passing by, out of instinctive aggression. She was helplessly shot down.

In Perfect Cherry Blossom, she is back for continuing her revenge, but was only a mid-boss and was easily defeated like one.

In Phantasmagoria of Flower View, Cirno aimlessly wandered about, apparently unconcerned by the flower incident for any reason other than the flowers being something else for her to freeze and play with. Through her dialog, her true childish nature is revealed, leaving no doubt that she really isn't smart at all. She really wasn't meaning to do anything but play games.

In Touhou Hisoutensoku, Cirno was intrigued by what she believed to be the great Daidarabotchi and hoped to tame it so that she won't be afraid of anything anymore. She showed more intelligence than in the previous game, as she has lost her habit of starting fights and admitted that she is incapable of defeating the Daidarabotchi if it lives in the hot spring's boiler, since it is too hot for her.

After the events of Strange and Bright Nature Deity, in Fairy Wars, Cirno tries to find those responsible for destroying their house. After learning that it was the Three Mischievous Fairies, goes in search of those responsible, to which defeat easily, because Cirno is the strongest.

After, Cirno wanders around for a while, bored of weak opponents. While wandering, she encounters Marisa Kirisame, making Cirno think she is a worthy opponent. They battle, and later, Marisa pauses and realising how powerful Cirno was. Marisa goes slightly harder, but is still defeated. Marisa claims that she didn't try as an excuse for her loss.

Cirno is a childish fairy who once said "I'm the strongest!". In Phantasmagoria of Flower View, she is labeled as "9. baka" (⑨. バカ, lit. "9. Idiot") in an explanation of the game screen's layout. She was again labeled as such in the manual for Touhou Hisoutensoku. This might simply shows that Cirno maybe some kind of idiot. An example of Cirno showing her stupidity would be the spell card Ice Sign "Icicle Fall", which has a very easy safespot to easily dodge the danmaku.

However, Despite this, she's smart enough to know when she's in deep trouble, such as her battle against Yuuka in Phantasmagoria of Flower View's story mode. She can also read, unlike some of her peers, such as Mystia Lorelei. She can also count (she shows knowledge of rounding and fractions in Fairy Wars). 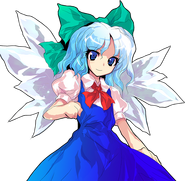 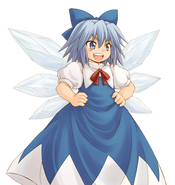 Double Dealing Character
Add a photo to this gallery

Retrieved from "https://hero.fandom.com/wiki/Cirno?oldid=1926491"
Community content is available under CC-BY-SA unless otherwise noted.