Defeat the zombies and take back Suburbia.

Citron is one of the main protagonists of the Plants vs. Zombies franchise. He is an anthropomorphic bounty hunter from the future who takes parts in fighting zombies.

He was voiced by Michael Dobson in Garden Warfare series, who also voiced Kernel Corn from the same game.

Citron appeared in Far Future - Day 6 as one of the obtainable plants to protect the players from Plants vs. Zombies 2. He can shoot out plasma balls, and electric plasma balls when boosted with Plant Food. He is in the Fila-mint family.

Citron also made appearance in Garden Warfare 2 as one of the playable characters on the Plants' side. His primary weapon is orange beam.

A L.E.A.F agent variant of him is Agent Citron. He asked the players to set three Cosmic Triangulators to locate his first bounty, the Z7 Imp.

Next, Agent Citron asked them to head to Lunar Landing, where the players have to vanquish future zombies.

After that, he needed the players' help to rescue Iron Ball and defeat S.H.R.Imp.

When the players completed all three quests, Agent Citron congratulated the players and let them open another portal, or meet Dave-bot 3000.1 after all other quests were completed.

In Battle for Neighborville, Citron is a playable character of Defend class.

Citron returned in Plants vs. Zombies Heroes as a Plant Hero who leads Guardian and Smarty classes.

In Citron's introduction comic strips, while Dr. Zomboss attempting to torture an orange, Citron coming to the rescue by using his shield to prevent him from doing so.

In IMPossible Mission!, Citron, Green Shadow, and Grass Knuckles attempted to foil Z-Mech's and Dr. Zomboss's plan of creating more Z-Mech battle suits by attacking them. They had a fight until Citron used his Spindash to defeat the villains.

Citron appeared in Code Orange! Citron Invades alongside Rose and Grass Knuckles to put their flag on the moon, which angered Dr. Zomboss and he sent Rustbolt, Z-Mech, and Brain Freeze to prevent them from doing so. When the Zombie Heroes encountered the Plant Heroes, they had a fight until Z-Mech kicked the Citron ball, knocked both Rose and Grass Knuckles out of the moon.

Frozen Citron is a Rare Citron variant whose overheating Frosty Beam chill and freeze enemies in his way.

Frozen Citron also hosts the Frozen Yogurt event, where the players must deliver yogurt to win a free yogurt.

Electro Citron is a Super Rare Citron variant who charges his Electro Charger to perform electrical splash damages to enemies.

Iron Citron is a Legendary Citron variant who has the highest health and slowest speed out of all Citron variants thanks to his suit, and uses his single-shot explosive Mech Breaker. After vanquishing 5 enemies in a row, he enters Iron Mode, where he gains temporary speed, ammo, and resistance boosts.

Party Citron is a Party Legendary variant who utilizes his overheating Party Orange Beam. Like many other Party variants, he can enter Party Time, where he gains temporary speed and damage boosts.

Toxic Citron is another Super Rare Citron variant who appeared in the Trouble in Zombopolis DLC. His primary weapon is the rapid-fire Limer Slimer, where he does overtime toxic damages to enemies.

Citron appeared as one of the supporting protagonists of the Garden Warfare comics series, who helps Nate Timeley and Patrice Blazing taking back Neighborville from Dr. Zomboss and his zombie army. 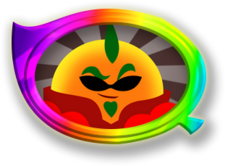 Peel Shield
Add a photo to this gallery

Retrieved from "https://hero.fandom.com/wiki/Citron?oldid=2033580"
Community content is available under CC-BY-SA unless otherwise noted.