Cléophée or Cleome in English version, is a major character introduced in the second half of the second season of the French animated series, Wakfu. She is a Crâ and the younger sister of the protagonist Evangelyne with whom she has always had a complicated relationship. After fleeing the city Crâ, Cléophée joined the Tofu brotherhood in their quest in court. She is also the aunt of Elely, Flopin and Pin and the sister-in-law of Grovy.

She is voiced by Maryne Bretieaux in the original French dub and Joanna Ruiz in the English dub.

Straightforward, smart, hot-headed, tomboy, aggressive, carefree and brawling, Cléophée is literally the polar opposite of her older sister. Unlike the other Cra's, Cléophée has a certain pleasure in hand-to-hand fighting, making her more like an Iop without the stupidity. This same need for adrenaline above all tends to leave Cléophée more in her choices rather than reason, as when she chose to desert guard Crâ just to go and fight in the ring.

Always unlike her sister, Cléophée is very comfortable in sociality, quickly gaining the friendship of the whole brotherhood, with the exception of Amalia with whom she has not got along since their childhood. Following her departure, the boys of the brotherhood who kept affection for her expressed how much she would have been useful to them in their quest for her talents for combat. Among her friendly relations, Cleopheus gets on best with Grovy given their natural love for brawl, with the two becoming a bit like an unofficial couple, Cleophée not missing an opportunity to take care of Grovy at Eva's expense.

Despite their rivalry, Cléophée idolizes her sister although she will never admit it directly. During the trip to the archipelago, the two sisters slowly began to bicker less and when Eva was injured by Remigton Smisse, Cléophée was horribly worried, showing that she really loved her older sister. Following this, Eva gave a sincere compliment on her little sister's shooting skills, which made Cléophée blush slightly.

In "The Tree of Life", Evangelyne finds herself in a hallucination caused by the tree of life where she sees a younger version of Cléophée.

In "Cleome", at the Trool Fair theme park on Ga Ga Island, Cléophée participates in a ring fight against three Trools with two other Crâ who are extremely bad to fight. When it is only her left, Cléophé arrives at first to undermine her three opponents until she is caught and almost had by a crushing throw if it were not without counting on the intervention. by Grovy. The duo regain the advantage against the Trools then suddenly, Evangelyne comes to interfere and confronts her little sister for her desertion, just so that Cléophée asserts her independence before finishing the last Trool still standing with Grovy.

Summoned to the park warden's office, Cléophée is given another opportunity to fight Grovy again in the ring, although Eva objects to this until it is revealed that Cléophée is under contract with the warden for two matches. in all. After she is expressed her desire to face the champion, the director rejects her request unless Eva also agrees to participate as it is only a three against one. Reluctantly, Eva agrees to participate but on the condition that Cléophée gives her word of Cra to return afterwards, which the young blonde claims to have given but has crossed her fingers. She then meets to her great joy the rest of Eva and Grovy's friends that she has heard so much about.

In the evening, the trio face off against a giant Trool in cage combat. Despite Eva's lack of fighting spirit challenged by Cléophée and Grovy, they manage to strike a decisive blow by tearing the giant's hair out, making it loose and harmless. Cléophée and Grovy then take pleasure in beating their opponent, unconsciously leaving Eva on the sidelines.

In "A Fistful of Kamas", Having lost company with her guards, Cléophée hid in Ruel's bag with the complicity of the latter and Grovy. Once Eva and Amalia are out of sight, Cléophée reveals herself to a Yugo kept in the dark because he would have revealed everything if he had known. La Crâ then accompanies Grovy and Yugo to rent a boat to the Crimson Claw archipelago until they see Ruel flying through the air following a dispute with the local pirates.

Throughout this day, Cléophée remains quite surprised with the way the brotherhood works, but quickly takes a liking to it. The day after the trick, which has become a party with the pirates, Cléophée is on the travel boat while Eva and Amalia, who had had a bad night, also arrive. Sensing what her sister is going to say, Cléophée retorts that she had crossed her fingers so her promise did not count.

In "The Zinit", Cléophé notices that Grovy has a hard time taking sea trips so she tries an old trick on him, consisting first of swinging her hip against his buttocks to give him vibrations then spreading his arms and told him to inspire. When Eva notices the complicity between her sister and Grovy, she begins to get angry, leading her little sister to stick her tongue out at her in mockery.

In "Bellaphone Island", Cléophée makes a joke about Amalia's bad looks in the early hours of the morning, causing tension between them until Eva tells them to calm down. Along with the rest of the girls, Cléophée is annoyed by the boys' lack of seriousness in cursing as they eat rare fish. Ironically, the gang ended up stranded on an island after a sudden Tsunami. When Yugo sends Az out on reconnaissance, she doubts the idea before they are all attacked by giant apes.

Following the attack, the group meets three strange island-native women whose girls are instantly suspicious while the boys fall under their spell. A tangle soon sets in between the girls and boys when Eva awkwardly asserts that boys are idiots to be led, leading Yugo, Ruel, Grovy, and Black Ink to follow the three women home.

Separated from the boys, Cléophée and Eva simultaneously use shock wave arrows to return the boat to the water. That done, the girls go in search of their friends while enduring one by one each danger that the island abounds. Finding the abode of the strange women, the girls discover that the boys have both become monkeys but are in the mental grip of the trio who actually turn out to be Bellaphones. With the help of Rubilax, the girls knock out all the monkeys without exception and collect the unconscious boys before running away. Trying to stop them, the Bellaphones accidentally cause the cave to collapse, crushing them in the process but the gang manages to escape in time.

Back on the boat, the boys go back to normal and apologize to the girls for really behaving like idiots.

In "The Silence of the Rings", The gang takes Ruel to the next island cemetery after his heart is unleashed but it only turns out to be a ruse on his part to dock and search for buried treasure in the cemetery. . Ruel subsequently unearths a ring containing an individual trapped inside who subsequently begs the gang for help to find the love of his life.

Going through the city led with an iron fist by the governor who turns out to be only a usurper, the gang storms the castle, beats the guards and finally the villain's giant robot, freeing the 'Isle. In the end, Cléophée and the others are disappointed that Ruel was only looking for a rare collector's card.

In "The Crimson Claws", The gang is finally in sight of the archipelago but is quickly surrounded by the submarines led by Prince Adal who orders them to turn around because he covets the island for his kingdom and because he fights with the dragon Phaeris.

When Yugo asks his friends not to go further in the quest because of the danger, they all refuse to drop the eliatrope but unfortunately, Yugo willfully sabotages the main axis of the ship to prevent them from risking their lives, trapping them. on board far from the archipelago with the exception of Grovy who merges with Rubilax to cover the swimming distance.

In "Phaeris the Mighty", Still stuck on the boat as the Shushus have landed on the island, Cléophée notices Goultard landing in the water so powerfully it creates a tsunami throwing the boat towards the island. Once docked, Cléophée is thrown to the ground by a parasitic cannon fire. She then assists her sister in battle.

In "The White Dimension", The Crâ sisters first save Ruel, Elaine and Black Ink from a Shushu before Eva decides to go to the explosions where Grovy is most likely to be, although Cleophée qualifies this. suicidal and subsequently annoyed by the ease with which her sister dodges all attacks.

In "The Eliatropes", After the defeat of the Shushus and Qilby, Cléophée disarms Remigton with a long-range shot as he holds Eva hostage. The scoundrel then tries to shoot Cleopheus down just for Eva to intervene and take the hit in the arm, putting Grovy in such anger that he sends Remigton and his brother Grany waltzed at once each. Then going to her sister's bedside, Cléophée expresses how worried she was for Eva so that the latter on her perfect shot that can de Crâ would have succeeded.

The quest coming to an end, the brotherhood of Tofu returns on the back of Phaeris while Cléophée continues the adventure with Elaine and Black Ink. 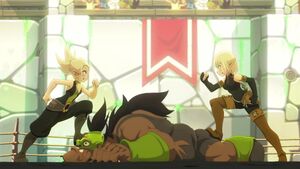 Cléophée argues with Eva about her life choices. 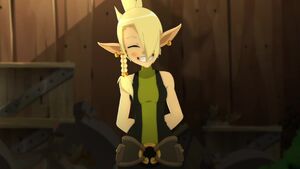 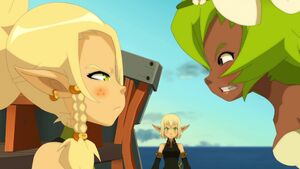 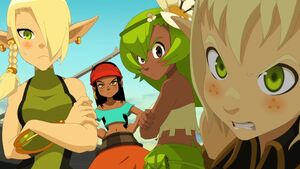