Founder and leader of the Dinosaur Protection Group

Working and researching in Jurassic World.

Help Owen Grady take down the Indominus rex that is later revealed to be created as an intended superweapon by Commander Vic Hoskins (succeeded).

Save the dinosaurs, Maisie, and Owen (succeeded).

Claire Dearing is one of the two main protagonists (alongside Owen Grady) of the 2015 film Jurassic World and its 2018 sequel, Jurassic World: Fallen Kingdom. She is also Owen Grady's love interest.

She is portrayed by Bryce Dallas Howard who also portrayed Gwen Stacy in the original Spider-Man Trilogy (Spider-Man 3) and Kate Connor (the adult version of Katherine Brewster) in Terminator Salvation.

According to Bryce Dallas Howard, Claire's actress, she is a "workaholic" and has a Type A personality. This was demonstrated by her actions when on a date with Owen Grady: she printed an itinerary, refused to drink tequila and criticized Owen's attire. She was devoted almost entirely to her job and was very good at it, but had found little time for personal pursuits and was a bit cold and aloof. Initially believing the dinosaurs to be little more than beasts with limited, if any, intelligence, she was shaken when she discovered a fatally wounded Apatosaurus and Owen comforted it in its final moments, which made her realize that they were living, thinking creatures.

Claire was a park operation manager and one of the scientists who researches dinosaurs. She is a work-a-holic, who is always busy. She hasn't had time to date or socialize since working here.

She barely has time to see her family, mostly her sister Karen Mitchell. Karen's sons Zach and Gray visit their aunt at her job in the theme park called Jurassic World. She was supposed to spend time with them, but work needed her. She sends her assistant Zara Young to show her nephews around the park. They will meet tonight for dinner.

The kids get lost from the park or accidentally lost their tour guide. Gray loves his aunt Claire's job and is really excited to see some dinosaurs. Her nephews got lost from the park. Claire had her own problems, she is asked by her boss to assist her boyfriend Owen Grady, a Velociraptor expert and trainer to inspect the Indominus rex, who needs to be checked. The Indominus had a tracking system, when they found out it was loose. But when she wasn't loose, the I. rex set them up so she can escape and terrorize the park. This was planned by Commander Vic Hoskins, who wants to use the I. rex as a weapon for the military.

Claire and Owen went to look for them and found them. All four of them escape Jurassic World and take down Indominus Rex, mostly the velociraptors on I.Rex's side, but not all of them. One of the Velociraptors (Delta) killed Hoskins.

Claire suggested a T. rex coming out from the exhibit from the first movie (Rexy), to help take down the I. rex. Both of these dinosaurs fight, but T.Rex took her out with the surviving two Velociraptors, who are now Team Owen and Claire and realize the I.Rex is not their friend and the Mosasaurus with their help.

Claire and her sister Karen reunite and Zach and Gray respects Claire and wants to spend more time with her. Claire and Owen declare their love.

In the movie, she founded the Dinosaur Protection Group to organize a rescue mission to save the dinosaurs of Isla Nublar from Mount Sibo's impending eruption that threatens to send the dinosaurs back into extinction.

She is betrayed by Eli Mills and left to die on the island after he got what he wanted: Blue. She, Owen Grady, and Franklin Webb manage to escape by sneaking onto the boat as it's leaving the island. She learns that Eli only wanted the dinosaurs so that he could auction them off to the highest bidder. Planning to stop him, Owen and Claire head to Lockwood Manor but are caught by Eli's men.

They are imprisoned among the dinosaurs and are too late to stop the auction. They escape with the help of a Stygimoloch and run into Maisie Lockwood. Together they enter the auction room where the Indoraptor is being bid on. They agree that the Indoraptor can't be allowed to leave the building. Claire and Maisie watch as Owen, with the help of the Stygimoloch, ends the auction by force. Owen reunites with Claire and Maisie but they run into Eli. They learn that Maisie is a clone of Benjamin Lockwood's daughter. The Indoraptor attacks and they are chased around the main floor of Lockwood Manor. Claire is injured and encourages Owen to go after Maisie who is being pursued by the Indoraptor.

Claire is later on the rooftop with a gun pointed at the Indoraptor who is poised to attack Owen. She encourages it to do so with the laser and the Indoraptor almost falls through the glass roof. The Indoraptor manages to catch himself but does end up plummeting to his death after Blue jumps on him. Claire is told by Zia Rodriguez and Franklin that the dinosaurs are dying due to the ventilation being broken. The only way to save them is to open the doors and let them run free. Claire goes to push the button to let them out but hesitates and decides against it. Maisie ends up being the one to open the gates, letting the dinosaurs out into the world. The group leaves the manor and say goodbye to Blue, who runs off into the North Californian wilderness.

Claire, Owen, and Maisie are later seen driving down the high way to an unknown destination. 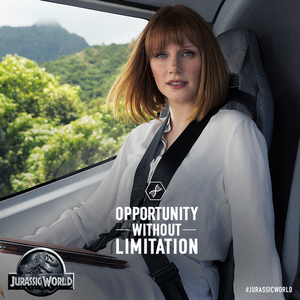 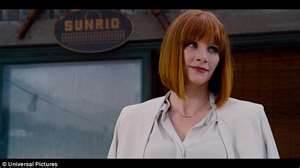 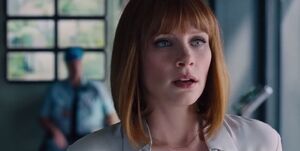 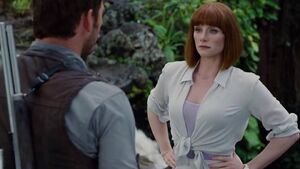 Owen Grady disapproves Claire Dearing go with him on the expedition. 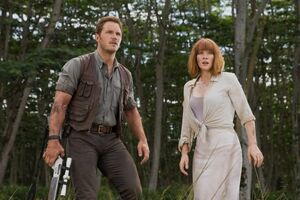 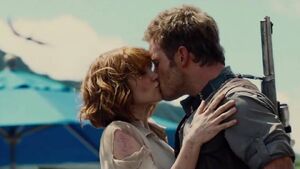 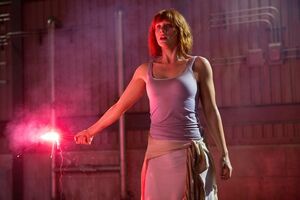 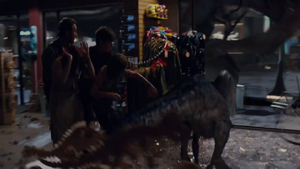 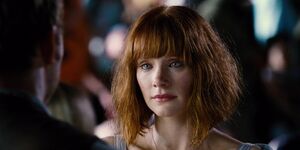 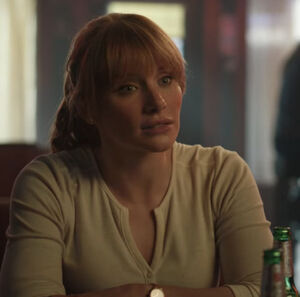 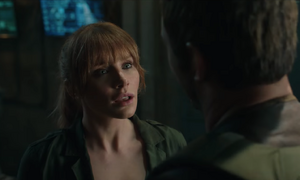 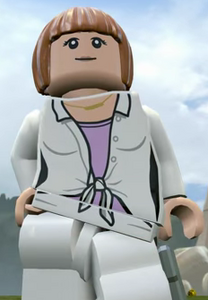 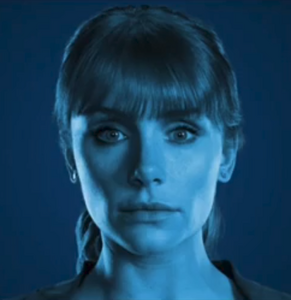 Claire in Jurassic World: Evolution
Add a photo to this gallery

Retrieved from "https://hero.fandom.com/wiki/Claire_Dearing?oldid=1695896"
Community content is available under CC-BY-SA unless otherwise noted.