Provide for her family

Heroic Disciplinarians
Claire Melinda Dunphy (née Pritchett) is a protagonist from TV Series Modern Family. She is the daughter of Jay and DeDe Pritchett and Mitchell's older sister. She is also the wife of Phil, and the mother of the Haley, Alex, and Luke. Claire was a stay-at-home mom until the fifth season when she started to work for her father at Pritchett's Closets & Blinds. She is portrayed by Julie Bowen in the TV series.

Claire was born at some point in the 1970s to Jay and Dede Pritchett. She has a younger brother named Mitchell, who is approximately 2 years younger. Claire has had a troubled relationship with her mother who frequently criticizes her, and making her feel she's not good enough ("The Incident"). Her mother also never went to any of Claire's events as a child ("Farm Strong"). This added more cause to her being a daddy's girl, as opposed to Mitchell who she claims is a momma's boy. When they were younger, the siblings are a figure skating duo nicknamed "Fire & Nice", which Mitchell claims was because of his red hair and because Claire was not nice ("En Garde"). She was addicted to Ms. Pac-Man ("Queer Eyes, Full Hearts"), which was released in 1982.

When she was younger, Claire was a wild girl, usually getting into trouble and at one time was brought home by the police naked, except for a pair of underwear ("The Kiss"). When she was 17, she dated a rogue Robbie Sullivan, whom she would sneak into the house at 3AM. She also dated a guy named Ricky whom her mother claims looks like Charles Manson ("The Incident"). Once, to annoy her father, Claire went out with a Cheesecake Factory manager named Todd who is twice her age ("Party Crasher"). In college, Claire dated Cooke, a professor, who dumped her. This is when she subsequently started dating Phil ("Bad Hair Day").

During a Duran Duran concert, Claire got pregnant with their first child. She announced it to Phil on the answering machine ("Message Received") and the two eloped before finally getting married four months later.

Claire is a perfectionist when it comes to dealing with her family, often knowing what to do during stressful times more than her husband Phil. She tends to be uptight and "bossy" in getting things done in the house, which usually leads to humorous disagreements with the laid-back Phil, who adores her. Her daughters claim she has excellent hearing because she could hear them whenever they say they are bored ("Aunt Mommy"). She is also actively participating in her children's school, and helps in organizing events, but it has been commented that she can be tactless and unlikable. In any case, Mitchell and Cameron often go to her for parenting advice in raising Lily.

She has a habit of being controlling, arrogant and hostile, which Mitchell attributes to the fact that she couldn't control the chaos in her own home ("Sarge & Pea").Claire has been shown to be extremely competitive, a trait she got from her father Jay, who encouraged her into sports and winning ("Egg Drop"). She is also shown to be blatantly honest and almost enjoy delivering bad news to people ("The Last Walt"). Claire will do anything to win, including dishonest or underhanded tactics, just to have one of many moments in the spotlight. Claire is also competitive to such a ludicrous degree that, when she sought to be the best house at Halloween, the result was so intense for the children that visited that, the next year, every trick-or-treater made sure they routed around their house and one child shrieked for her mother when Claire offered her candy.

Claire has a mysterious penchant for death and the macabre, implied first in "Halloween" which she says is her favorite holiday. Every year she would meticulously organize Halloween displays and pranks at her house, except one year after she scared an adult who fainted at their doorstep, and neighbors petitioned that they keep decorations "family friendly" ("Open House of Horrors"). After gay marriage was legalized in California, she suggests to Mitchell gruesome ways on how to propose to Cameron ("Suddenly, Last Summer").

Along with Phil, Claire enjoys what she refers to as "cheesy cinema" ("Our Children, Ourselves "). Claire also seem to enjoy arts and crafts, insisting that during Luke's birthday party, there be a table where kids can make personalized comb sheaths ("Fizbo"). Claire enjoys reading and jogging, as she demonstrates that she can beat Phil in a race in "Run for Your Wife". It is revealed in "Virgin Territory" that she regularly goes to shooting gallery to unwind, during which she tells her family she is doing yoga. 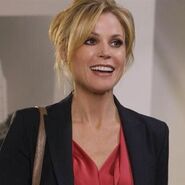 Retrieved from "https://hero.fandom.com/wiki/Claire_Dunphy?oldid=1351984"
Community content is available under CC-BY-SA unless otherwise noted.