Claire Standish is the princess of the group and the fourth-in-importance character in the 1985 film, The Breakfast Club.

She is played by Molly Ringwald.

She was sent to detention for cutting school and shopping during school hours.

She becomes the target of John Bender's insults (which Andrew Clark often threatens him for and defends her from), but in the end of the film, she falls in love with him. It is revealed that her parents use her as a bargaining chip so they can get back to each other. She also helps Allison Reynolds with her physical appearance so she can attract her love interest, Andrew Clark. 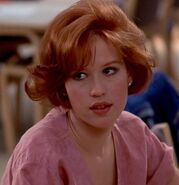 Add a photo to this gallery
Retrieved from "https://hero.fandom.com/wiki/Claire_Standish?oldid=1603230"
Community content is available under CC-BY-SA unless otherwise noted.