To one day marry Chane

Claire Stanfield (more commonly known as Felix Walken or Vino) is a main character and anti-hero in the light novel and anime series Baccano!. He is considered to be the best assassin in the world, something he takes great pride in. Despite being one of the most brutal characters in the series, he is also one of the most heroic, having made a vow to never harm innocent people. He is the husband of Chane Laforet and a childhood friend of Firo Prochainezo.

He is voiced by Masakazu Morita in the Japanese version of the anime and Jerry Jewell in the English version, the latter of whom also voices Kodaka Hasegawa, Natsuno Koide and Priapos.

Claire is a presumably handsome man with blood-red hair and a lean build. Aboard the Flying Pussyfoot, he wore a custom-white conductor's uniform which was soon coated in the blood of those he killed aboard the train.

When he was introduced as Young Conductor, Claire seemed like a very handsome, very happy-go-lucky kind of person, with a penchant for telling stories about trains. He was very close to his mentor Tony, and loved the trains very much. However when Claire revealed his true identity and adopted the identity of the Rail Tracer he showed that he is a psychotic, yet philosophical, maniac, something of a very deranged warrior poet. Claire employs countless methods of torture, including hanging a criminal over the rail of a train and eventually smashing their faces into the ground.

Claire suffers from an extreme case of solipsism. He believes that the world is a dream of his own creation, and all the people are figments of his own imagination. He cannot picture the world without him in it, and so in his mind he "can never be killed." If he does die, he'll simply 'wake up' from his dream. His solipsism has led him to eschew the idea of immortality, as "it can do nothing for him". He considers himself the centre of the world and takes pride in this. However, Claire immensely dislikes it when people attribute his skill to God or natural talent. He emphasizes that he worked extremely hard to improve himself, and he wishes people would acknowledge the effort he put in rather than dismissively calling him a prodigy.

Despite his ruthless and brutal methods as an assassin, Claire is actually a very friendly and affable person when not on the job, if also very odd and quirky. This is shown when he has a very civil conversation with Rachel in a restaurant about how to declare his love for Chane. However, he can also be rather insensitive, as shown when he tells Rachel that Chane is even less normal than she is, though he likely didn't realise it was offensive as she had just admitted that she wasn't exactly normal.

Claire is also considerate of those he deems innocent, going out of his way to ensure the safety of people who are not his targets and/or pose no danger. Claire takes pride in his work, and takes his responsibilities seriously. As a train conductor, his job is to protect the passengers and he does so with zeal, adopting the Rail Tracer persona in order to protect them. It can be argued that he can take his responsibilities too seriously- for instance, when he encounters a stowaway on board the train he briefly considers dealing with her despite the fact that he is in the middle of a bloodbath. Claire has stated that only the strong, like himself, are capable of possessing mercy or compassion. He also despises people who kill for fun, like Ladd Russo and his goons.

Claire is also a hopeless romantic; before he met Chane, he had a tendency to propose to a random woman he first met, even claiming that it was love at first sight. However, even though he would normally move on from a woman after being turned down, he is incredibly determined to find Chane again after the Flying Pussyfoot incident, due to the note she left him and being attracted to her amazing fighting abilities. When he finally meets up with Chane again, however, he decides to compromise and take things slow, asking Chane if they can be friends first and then marry later, to which she happily agrees.

Claire also seems to dislike his birth name, due to his tendency to go by aliases and the fact that he eventually changes his name to Felix Walken. From then on, the only person he allows to call him Claire is Chane, who can't even speak.

The name "Vino" is well feared in the criminal underworld as seen when Gustavo became terrified at the prospect of having to face him, hiring freelance assassins left and right just to kill him. Defeating him is the dream of many powerful and proclaimed assassins. He is said to be the equal to Ronnie Sukiart, a demon.

His speed, strength and dexterity are far beyond the boundaries of an ordinary human, first showcased on the Flying Pussyfoot where he became the Rail Tracer and was enough of a threat to be considered an entire third faction of his own against several homocidal hitmen from the Russo Family and the Lemures Cult that worshiped Huey, he basically managed to take down and severely traumatize both parties. He defeated the highly dangerous and well feared hitman Ladd Russo, known for his ruthlessness and killing capability, and took down several assassins, even severely crippling the "Vampire" Class homonculus Christopher Shouldered. Even at a young age he showed this promise catching the attention of Huey Laforet. Ever since the incident on the flying Pussyfoot, Immortal Czeslaw Meyer has become afraid of him to a high degree that persists even towards to 2002 storyline, proving that Claire has the ability to bring even the immortals down a few scales on their power-meter. On the flying pussyfoot, he showed tremendous acrobatic skills moving under and over cars without any problem. To Claire, the chaos on the Flying Pussyfoot was like a "walk in the park" further elaborating just how frightening his capabilities really are.

With only short battles and unexpected means he defeated four powerhouse assassins that were hired by the Runorata Family without much difficulty at all and walking away unscaved, in fact Claire has even walked away unscathed from battles with supernatural being such as Adele and immortals like Berga.

His Solisiphistic persona also gives him somewhat controversal, but effective and surprising ideas in the midst of battle. One example would be using Christopher's eyes to see the chakrams approaching him from behind or taking the guise of Felix Walken to infiltrate the Runorata's hired assassins.

Throughout his battle with Christopher, he held back severely just to fight longer with Chane. Once she left, he took him down with one attack that has left him in shock.

He possesses the mental instability (what some would call insanity) to feel no guilt, and is very charismatic, intelligent and perceptive, capable of grasping even the warped mind of Ladd Russo and tricking him into jumping off the train. He also deduced Huey and Chane's connection without much information.

The name Vino references the way he mutilates his targets, leaving them caked in a layer of blood and looking like they are soaked in wine. He was adopted into the Gandors at a young age and is considered the fourth Gandor brother. Despite this, he is not considered to be part of the family. In 1925, Huey Laforet visited New York City in the hopes of meeting Claire, who he described as a genius, but Claire ran away from home to join the circus and became an acrobat. He uses the strength and agility he gained from his training in his trade. It should be noted that he is also nearly unstoppable in physical combat. In addition to being an assassin, he also works as a conductor aboard the transcontinental train Flying Pussyfoot, making it easier for him to travel to his targets. When the train is hijacked, he assumes the identity of the Rail Tracer, a monster that eats train passengers, to kill train hijackers and ensure the passengers' safety. He meets and proposes to Chane Laforet at the train incident. Later, they meet in Manhattan, where Chane has joined the gang of Jacuzzi Splot. He later purchases the name Felix Walken from a retired assassin. His great-grandchildren are named Claudia Walken and Charon Walken.

Claire's father and the father of the Gandor Brothers were on very good terms and as such Claire spent much of his early childhood with his one-day adopted family. Presumably around this time is when he also befriended Firo Prochnazeo. At some point Claire was orphaned and taken in by his family's long time friends the Gandors. Keith, Luck and Berga retain a close relationship with him after this and consider him to be their fourth brother. However for reasons yet to be disclosed Claire ran away with the circus. It was around this time that Huey Laforet and Chane Laforet ironically sought him out but settled on conscripting Tack Jefferson instead.

Claire's time in the circus helped him to hone his strength and agility to beyond anything that had been seen prior or since. Eventually Claire left the circus and began his life as an assassin where he retained his possitive relationship with his adoptive brothers and the Martillo Family.

One of his known hired jobs involved Don Bartolo Runorata hiring him to clean up his competition and within the night all of the Runorata's targets had been killed.

By the twenty-first century Claire married Chane and now has great-grandchildren- child-actors duo Claudia and Charron Walken. He has also left a psychological scar on the not-so-young Czeslaw Meyer who avoids his relations because of this phobia.

Even pushing ninety Claire retains his daredevil and thrill-seeker ways and during 2002 he is scuba diving for treasure. 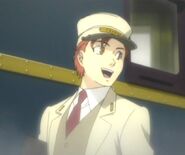 Claire as a conductor 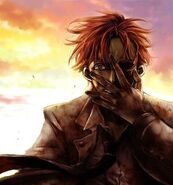 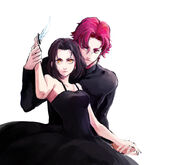 Add a photo to this gallery
Retrieved from "https://hero.fandom.com/wiki/Claire_Stanfield?oldid=1802829"
Community content is available under CC-BY-SA unless otherwise noted.