To be with Rudolph

She was voiced by the late Janet Orenstein in the first film and Elizabeth Carol Savenkoff in the sequel.

She first appears at the Reindeer Games along with several other young does who are watching the bucks practice flying, where she takes a liking to Rudolph and they agree to walk home together later before telling Rudolph that she thinks he is cute, which causes him to leap into the air with joy. After Rudolph's fake nose falls off revealing his real red one, Clarice is the only one who doesn't mind this and she sings There's Always Tomorrow to him before her father arrives and orders her to come home (as he doesn't want her to be seen with a red-nosed reindeer), which she reluctantly does. She goes against her father's order later when she leaves to help find Rudolph with his mother Mrs. Donner after he runs away.

Months later, Clarice, along with Mrs. Donner and Rudolph's father, Donner, are captured by the Abominable Snow Monster, but then Rudolph arrives and battles the creature, only to be knocked out. Luckily, Rudolph's friends Hermey and Yukon Cornelius arrive and defeat the creature. The group then return home where Clarice reunites with her father, and the next day on Christmas Eve, along with Donner and Mrs. Donner, she watches Rudolph help Santa and the reindeer get through the storm with his nose's light.

Rudolph the Red-Nosed Reindeer and The Island Of Misfit Toys

Clarice appears in the 2001 sequel where she plays a more prominent role. She is shown to struggle with flying, but fortunately Rudolph helps her out. She also joins him in saving the Misfit Toys from the Toy Taker. She finally learns to fly when Rudolph admitted his love for her. In When the Toy Taker catches them on his blimp, he releases them, but they head back into the blimp by Rudolph and Clarice flying and saving Hermey and Yukon. Rudolph and Clarice do their best in waking the toys up from their hypnosis. They both confront the Toy Taker and chase after him and he eventually gets captured and is revealed to be a teddy bear named Mr. Cuddles. He was revealed to be abandoned by his owner Steven and became the Toy Taker who stole the toys. He apologized and was promised to be brought to Queen Camilla to be repaired and happy again. Clarice watches as Rudolph flies off to deliver the toys. 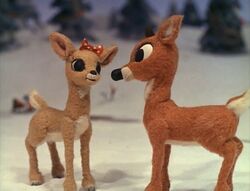 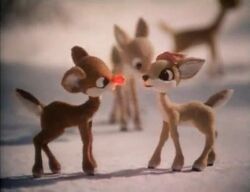 Clarice's cameo in Rudolph and Frosty's Christmas in July. 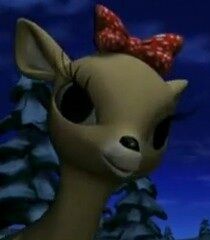 Clarice in Rudolph the Red-Nosed Reindeer and the Island of Misfit Toys. 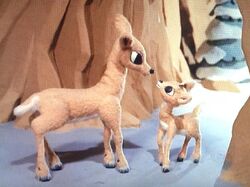 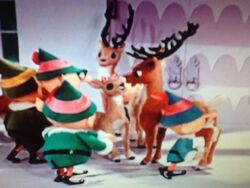 Clarice with her father. 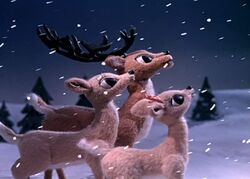 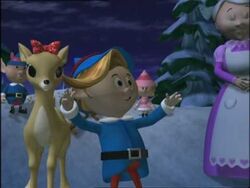 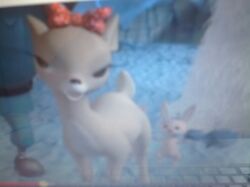