Councelor of Cabin Five (formerly)
Student at the University of Arizona


To defeat Kronos and the Titans (succeeded).

Clarisse La Rue is a Greek demigod, a daughter of Ares, the Greek god of war. She was the former head counselor of Cabin 5 or Ares's cabin, before stepping down and giving the role to her half-brother Sherman Yang. She is currently attending the University of Arizona and is the girlfriend of Chris Rodriguez. Although Clarisse often fights on the good side, she is a bully to many characters, including Percy Jackson.

In the film Percy Jackson: Sea of Monsters, she is portrayed by Leven Rambin.

Not much is known of Clarisse's early life other than that she was born to Ares and his mortal lover Ms. La Rue in Phoenix in Arizona. When she was older, Clarisse left her home to go to Camp Half-Blood and was brought there by a satyr named Gleeson Hedge. She most likely stayed in the Hermes Cabin (which took in unclaimed demigods or demigod children of minor gods, until after the events of The Last Olympian) before being claimed by Ares and moved into the Ares Cabin and eventually becoming the cabin's head counsellor.

Percy Jackson met Clarisse when she comes out from her cabin, saying that newcomers must have their heads pushed into a toilet. This is before Percy is known to be a son of Poseidon. Percy accidentally squirts toilet water on Clarisse, her cabin mates, and Annabeth. Later on, Percy breaks Clarisse's electric spear in a game of Capture the Flag. Percy regains his health from the spear attack from his father's powers.

The Sea of Monsters

In the second book, Clarisse has her first quest, in which she brings the Golden Fleece back to Camp Half-Blood, with help from Percy and his friends, to heal Thalia's tree because it was poisoned.

Clarisse's scouting mission involves her entering the Labyrinth near her mother's house in Phoenix, Arizona. There she finds a fellow half-blood, Chris Rodriguez, who was driven crazy in the Labyrinth by the ghost of King Minos. She takes him back to Camp Half-Blood and tries to nurse him back to health with nectar and ambrosia (healing foods for the gods). She is found crying, showing that she is, in fact, capable of love. Dionysus is able to reverse Chris's insanity. The two are later seen together, happy and holding hands at the campfire while singing.

Clarisse develops a friendship with a daughter of Aphrodite named Silena Beauregard and forms a relationship with Chris Rodriguez. The Ares Cabin refuses to fight in the war against Kronos. When Silena tricks Clarisse's siblings (the Ares Cabin) to fight in the war, Silena is killed by a drakon. Clarisse then avenges Silena's death by slaying the drakon by herself with no armor or shield. She then battles the army of Kronos with her siblings, receiving the Blessing of Ares during the battle. When the Gods arrive at Mount Olympus, her father praises her efforts in the war and her slaying the drakon. At the end of the book, she shows respect for Percy because she is among the campers who eavesdrop on him and Annabeth before playfully throwing them into the lake. Afterwards Chris comes up to her and asked her to be his girlfriend, As Clarisse Says yes, they share a kiss, by the lake. 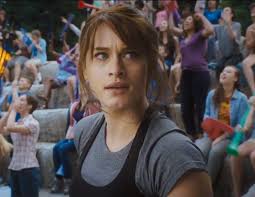 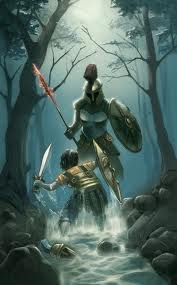