Neurotic
Clark Reedy is one of the supporting protagonists (alongside Gus Matthews and Richie Goodman) in the 2006 sports comedy film Benchwarmers. He is a rather awkward, clumsy and a bit socially developed newspaper delivery guy who's a spaz at most anything he tries.

He is played by Jon Heder who is also famous for Napoleon Dynamite.

Clark is a clumsy paperboy (who constantly ends up throwing his newspapers on the neighbors' rooves). He's also rather dimwitted and gross (he picks his nose, and eats bugs). He is also very clumsy with baseball. He hits the ball, but then tosses the baseball bat far away, resulting in some broken things. He also doesn't release a hot potato until it's too much for him and flags it out the window.

Clark and Richie were bullied as young kids and not very good ad baseball but so Gus invites them to play in the late afternoon. One day Gus and Clark witness a team of Baseballers bullying a young boy named Nelson Carmichael. Later that day, bullies (the coach of whom is Jerry McDowell, their childhood bully) and despite the 3 against 9 team up, they defeat the boys. The millionaire father of Nelson, Mel, invites Richie Gus and Clark to form a team called The Benchwarmers and they become the sensation of the league, with a legion of outcast cheering for the team.

At the semi-final game, Jerry convinces coach Wayne to bribe the umpire by entering his Dominican friend Carlos into the league claiming him to be 12 years old (despite the fake birth certificate being written in green crayon). Carlos proved to be a professional, who purposely stepped on Gus' hand to to injure it to much for him to pitch. But the Benchwarmers eventually manage to defeat Carlos by making him too drunk to actually pitch properly and they manage to win when Richie's agoraphobic brother Howie is hit by the pitch but forces the winning run.

When Gus' secret past of being a bully; known for using name calling over physical force and had bullied one child so intensely that the boy, named Marcus, had to be sent to a mental institution; bullied as a kid is revealed, he is kicked off the time. He apologizes to the kid Marcus and at the final game Marcus gives a touching speech to how he forgives Gus. Richie and Clark and the whole crowd are moved by this.

In the final game, Gus, Clark and Richie do not play; rather, they let a team of Nelson and other children play, to give them a chance to compete. The final is played against a team with a heartless coach, Jerry, who practically torments his players – and was Richie and Clark's main bully when they were children. Nelson hits the ball, and Jerry's team lets him score a run, saying that Jerry is "the loser". The Benchwarmers storm the field, celebrating the fact that they were not shut out, and they give an enraged Jerry a taste of his own medicine, giving him a wedgie. Later, The Benchwarmers celebrate at Pizza Hut where Clark manages to kiss a girl (to Richie's chagrin since Clark got to kiss one first) 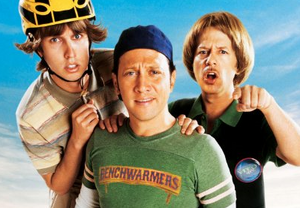 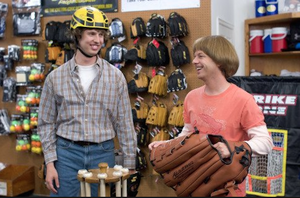 Clark and Richie and the sports store 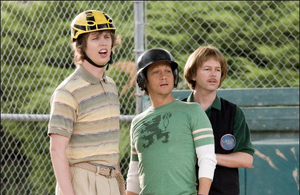 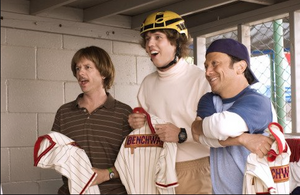 "I'm never taking this thing off! It's the coolest thing ever!" 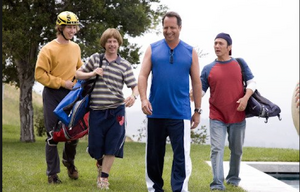 Gus, Clark and Richie with Mel 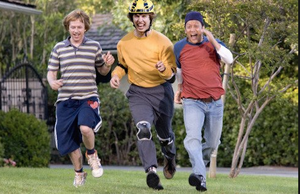 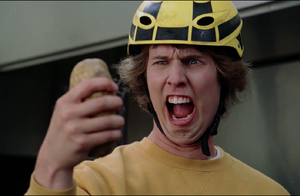 Clark screaming in pain from a hot potato he's supposed to release. 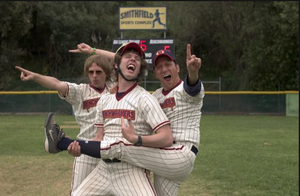 Add a photo to this gallery
Retrieved from "https://hero.fandom.com/wiki/Clark_Reedy?oldid=1682088"
Community content is available under CC-BY-SA unless otherwise noted.