Heroes Wiki
Register
Don't have an account?
Sign In
Advertisement
in: My Hero Academia Heroes, Teams, Organizations,
and 23 more

Find Izuku and reason with him

Class 1-A are the main protagonists from the anime/manga series My Hero Academia. They are one of the most prominent classes at U.A. High School, consisting of students who train to become Pro Heroes.

Ever since the foundation of U.A. High School, Class 1-A has been regarded as one of the most successful due to its teachers and relevance in the Pro Hero community. During the Entrance Exam Arc, the most recent class is formed, consisting of main protagonist Izuku Midoriya. Shortly into the school year, Tenya Ida is appointed the Class Representative, with Momo Yaoyorozu as the Class Vice Representative. The homeroom teacher is Shota Aizawa.

After the Paranormal Liberation War, Izuku left U.A. High School and his classmates, giving them letters about how he has to stay away from them since his nemeses All For One and Tomura Shigaraki know that he is the wielder of One For All, so he must leave them in order to protect them. As he fought off the supervillains sent to capture him, Izuku began to sport an isolated and mature persona as he distanced himself from his usual kindhearted personality, but ultimately kept going so all of his loved ones, especially his classmates, could all smile together one day.

Meanwhile, the rest of Class 1-A found that Izuku has been working with Endeavor and the other top Pro Heroes to stop All For One and Tomura. Unbeknownst to him, his classmates were not satisfied with his goal since they were worried about him and knew he was isolating himself from his friends rather than considering in their favor. Tenya told Nezu that he and his classmates were Izuku's friends and they won't let him face his own burden alone, convincing Nezu to let them look for Izuku. They found him being confronted by the supervillain Dictator, getting beaten up by a mob controlled by his Despot Quirk until Katsuki Bakugo stunned him, setting the civilians free. Katsuki confronted Izuku, asking if he is smiling now. Izuku tells his classmates that he wants to keep going so they can smile, and he will fight them if they get in his way, leaving Class 1-A no choice but to confront Izuku.

Izuku formed a massive smokescreen to run away, but all of his classmates followed and told Izuku how much he meant to them. Koji pleaded with him to stop running away because Nezu wanted him back, while Hanta complimented his Blackwhip as he previously helped train Izuku with Blackwhip. Kyoka told him about how he helped her organize her notes and set up the school festival, which she really appreciated despite seeming like a small gesture. Mashirao told Izuku about him being was mad on the former's behalf during the sports festival, so he can't sit back while Izuku struggles. Izuku told his classmates that his presence was a danger to them as All For One could kill them, so he had to leave. Rikido tried to bribe him that he can't Eri's sugared apples if he doesn't come back, while Izuku replies that Eri won't need him anymore as she will be put in danger too. He was restrained by Hanta, Momo, Mezo and Fumikage, and told everyone to get away from him. Denki told him that even though they don't have much in common he is still his friend, while Fumikage entraps him with Dark Shadow, giving credit to Izuku for using Dark Shadow for defense. Izuku freed himself and flew away, telling his classmates that he can't sense any danger through Danger Sense, so he was fine as he continued to claim. He was stopped by Shoto's Heaven-Piercing Ice Wall, with him lamenting the look on Izuku's face and how his responsibility prevented him from crying. Tsuyu climbed across a wall to tell him that he matters to her and she shares the same feelings he does, because if he wants to be a hero, she and Class 1-A will make sure he doesn't live that dream alone. 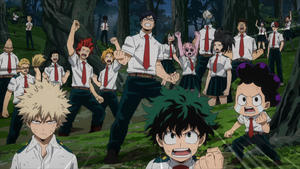 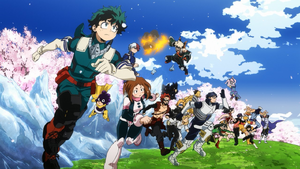 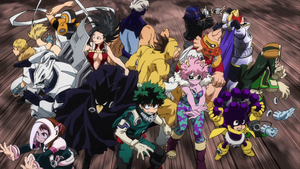 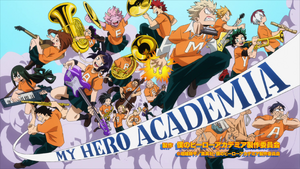 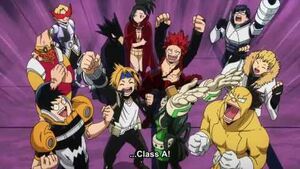 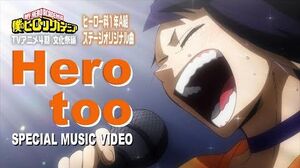