Relaxing with his fellow Variants.

Classic Loki was a Variant of the main Loki Laufeyson who branched from the Sacred Timeline when he survived his encounter with the Mad Titan Thanos aboard the Statesman. After contemplating his existence, Loki decided to live out his days in isolation so that he couldn't bring pain to anyone else.

He spent thousands of years living alone on an isolated world until he grew to old age, at which point he decided to venture into the universe once more in search of his brother Thor who he dearly missed. The moment he tried to leave the planet however, the TVA arrived and apprehended him for causing a branch from the Sacred Timeline. Loki was pruned, meaning he was banished to an area at the end of time known as the Void.

The Void was essentially a dumping ground made up of the branched realities the TVA had erased in their quest to retain their idea of the proper flow of time. Loki wasn't alone in the Void, as other Variants of Loki had the skills to survive the threat of Alioth, a gargantuan cloud-like creature that hunted all life in the Void and degraded any matter it came into contact with.

Eventually, a Loki Variant arrived in the Void who believed that he and a female Loki Variant named Sylvie could subdue Alioth and find the person responsible for the TVA's creation. Classic Loki, who had spent years doing nothing but surviving, decided to help his fellow Variants on their mission. He sacrificed his life to give the pair a chance to defeat Alioth and died happily knowing he had fulfilled his glorious purpose.

He was portrayed by Richard E. Grant.

Like his original counterpart, Classic Loki was born a frost giant to Laufey, but was abandoned and later adopted into the Asgardian Royal Family. He would become the adoptive brother to Thor, and became known on Midgard as the Norse god of mischief as well as a prince of Asgard. Classic Loki's life proceeded as the sacred timeline Loki until Thanos arrived with the Black Order, wanting to obtain the Tesseract from Laufeyson. Unlike his original counterpart, Classic Loki created a projection of himself that was killed by Thanos, allowing himself to live while Thanos left.

Classic Loki drifted through space as everyone thought he was dead, and during his drifting, he lamented on how much pain and misery he caused in his life. He felt great remorse for his actions, and decided to exile himself on a isolated plane to prevent himself from causing more harm. While in isolation, Classic Loki started to miss his adoptive brother, and decided to return to Asgard but was arrested by the Time Variance Authority. After facing prosecution, Classic Loki was pruned and sent to the void, where he met his other variants - Kid Loki, Boastful Loki and Alligator Loki. Like the others, he accepted Kid Loki as the king of the void, and would run away from the creature Alioth. 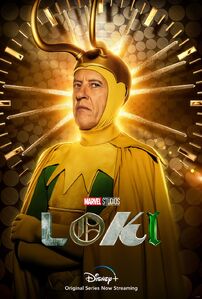