Elementary School Student (Prior to Apocalypse)

Being with Lee.
Playing with Duck.
Teaching and taking care of AJ.

Survive the Apocalypse (ongoing).
Protect AJ at all Cost (succeeded).

Clementine was a young 9-year-old (currently 16-year-old) girl of African-American descent living with her parents in an Atlanta suburb. While her parents were away, she was forced to join a group of survivors in an effort to find safety in midst of a zombie apocalypse. Through the plot, Clementine develops a strong bond with the player-protagonist Lee Everett, a former fugitive who becomes her new guardian. Being one of the first elements created for the game, Clementine was designed to act as a moral compass for the player in addition to an influence on the player's decisions, to which the player would have to reflect upon.

Clementine was considered an emotional centerpiece of the The Walking Dead game, and several journalists expressed caring for her fate in a way that few other games have been able to capture.

Clementine starts out as a very innocent and kind young girl who is also very smart for her age. As the game progresses she begins to grow stronger and she becomes more understanding of the tough world she is in though does keep her child like innocence. Clementine can be playful and has shown that she is still just a kid like when she pulled pranks on Duck.  By the second season she grows far more hardened by the hardships she has gone through. Though still fairly innocent she is far less naive and due to being on her own can be more assertive to protect herself. Since in season 2 she is controlled by the player different nuances of her personality are up to choice.

In the first season Lee Everett meets Clementine when he stumbles across her house. Clementine gives him the weapon he needs to finish off her zombified babysitter that had attacked him. Lee immediately begins caring for the helpless girl since her parents are in a different part of the country and he is the only possible guardian of her. As the two begin facing hardships they grow very close and the bond they share makes the player think the choices they make over. Protecting Clementine from being traumatized is a noble goal but at the same time it is hard to shield her in a harsh new world. Clementine's innocence is shown when she urges the group not to take supplies from an empty car.  In the camp Clementine makes friends with another child named Duck and likes the company of others such as the former news reporter Carley and the dim witted but friendly Ben. As the adventure continues though she loses many of these friends she has made and the world's harshness continues to grow. Lee realizes that he needs to teach Clem how to defend herself and so he helps her learn to use a gun. When in Savannah Clementine meets Omid and Christa a young couple trying to make it in the new world. Clementine grows to like them especially the very likeable and funny Omid. Clementine's newly acquired gun skills help her greatly and she proves herself to have grown and become capable of surviving. Unfortunately she falls for the lies of a mysterious man who tells her that he knows where her parents are. With Clementine captured Lee tries to save her but gets bitten in the process. Despite this Lee gives everything to save her as his time runs out. When Lee faces the stranger he reveals that his family died due to Lee's group stealing the things from that car. The man says he wanted to protect Clementine but kept her locked in a closet. Clementine makes her choice as to who she wants as her guardian when she attacks the stranger allowing Lee to get the jump on him. After a tense fight and the strangers apparent death Lee reveals his bite to Clementine. Lee protects her one final time as he fights his way through the city of zombies. Lee eventually dies and Clem is left by herself in the scary new world. As she walks on the outskirts of the city she sees two figures in the distance.

Clementine was reunited with Omid and Christa and the two began to settle down and try and find a place in the world. Now the protagonist Clementine has to face challenges right away as a rude young girl tries to rob her at gunpoint in a bathroom. Omid walks in and tries to help Clem but is shot when the girl is startled by the door shutting behind him. Christa finds out and shoots the girl and Clementine faces another loss of someone she cares for. Christa falls into dispair and Clementine is left in a bad situation as the two have a hard time finding allies or supplies. Things get worse when their camp is attacked by some men and Clementine is seperated from Christa. Clementine on her journey to find food meets a dog named Sam who seems friendly. But after Clementine tries to eat things go wrong and Sam attacks and bites her. Clementine manages to kill the dog but is wounded and nearly passes out. She is found by two men who help her but when they see the bite become scared. Clem explains that it is a dog bite and the men believe her. But when they reach their group the group fights over whether they believe her or not. Clementine is locked in the shed over night to see if she turns but she sneaks into the group's house to get supplies to clean her wound. When she is inside she meets a young girl who seems to be far more innocent and oblivious to the world than her. When Clementine gets back to the shed and seals up the bite a walker brakes into the shed and she manages to kill it. The group finds her and she asks to come inside. Luke one of the men that believed her apologizes and feels guilty for what she went through. Food is given to her by Luke and she explains her story to him. Afterwards Luke offers her to stay with the group. Later when she goes it exploring with Pete and Nick (two members of the group) they find a bunch of men shot up. Before they can fully investigate a group of walkers attack and Clementine must choose to save one of them.

Regardless of the player's choice Nick lives and Pete dies and Clementine escapes back to the house. Later a man shows up at the house. The man seems to be after the group and Clementine tells them what happened once they get back. The group explains that the man is Carver, an enemy of the group after them and everyone decides to leave their home and go on the run. Clementine bonds with Luke and the others on their journey and after clearing a bridge things begin to get hectic when Nick shoots a perfectly innocent man by mistake. Everyone reaches a lodge where the group gets into an argument with its residents. Clementine is shocked to find that one of its residents is Kenny who survived his apparent death. This leads to friction though where Clem has to pick sides between her new friends and her old ally. Kenny and Luke leave the lodge at the worst possible time when Carver arrives. Clem ends up having to make tough choices that cost lives as an intense standoff takes place. Eventually Clem and her group are captured by Carver and hauled off to his camp.

Once in the camp Clementine meets new people and has to endure a harsh new surrounding. Kenny tries to convince her to look for a way out but she is helpless at first. When Carver checks in on Clemetine's first day of work she discovers how truely brutal he is when he throws Reggie (an innocent man) off of the roof for not making sure Clem and Sarah completely finished their work. Clementine also gets to know Bonnie, a kind woman who seems to be dislike some of Carver's actions. Eventually Clementine discovers that Luke is alive and Luke explains his plan to break them out. Clementine now knows of Luke's survival and with this knowledge her and the group begin to discuss their escape. Unfortunately Carver catches Luke and confronts the group, asking who stole the walkie talkies. After a brutal beatdown of Kenny by Carver Bonnie is convinced to help the group escape and tells them that she will help them that night. Luke wants to rest and Kenny is badly beaten but the group ends up pulling itself together and attempting to escape. Clementine is sent to set off the speakers to the building and to lure the walkers away and when she goes to find her group discovers that Carver is holding them at gunpoint. Clementine scales the side of the wall and leaps on Carver's back causing him to drop his gun. Luke and Kenny punch him and Luke ends up with the gun. Luke is hesitant to shoot him but Kenny does, shooting both of his legs. After this Kenny beats Carver to death with a crowbar which Clementine has the option to watch. After this they rub zombie guts on themselves and attempt to walk through the horde. Carlos is suddenly shot by the remaining inhabitants of Carver's camp when mistaken for a zombie. Carlos screams and is devoured by Walkers causing Sarah to panic and run away. Sarita is bitten by a walker and Clementine then has to choose whether or not to cut her arm off.

NOTE: Most of these can completely avoided. 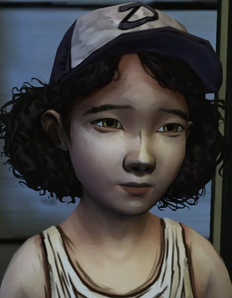 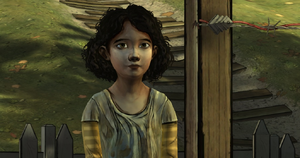 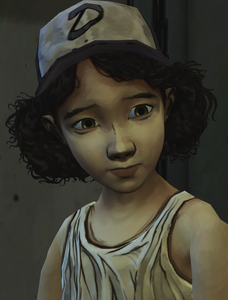 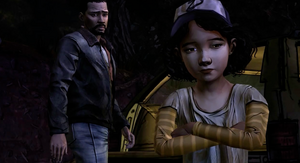 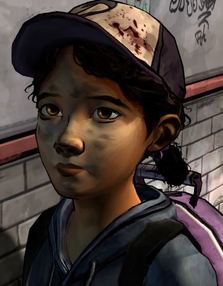 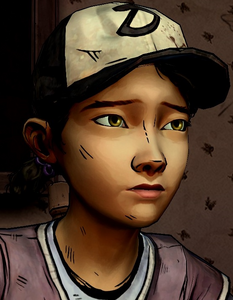 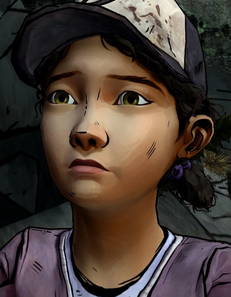 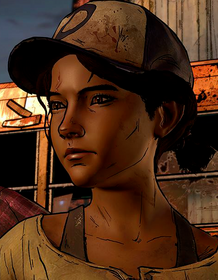 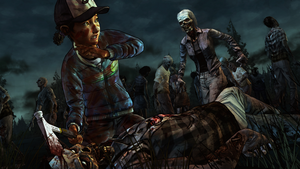 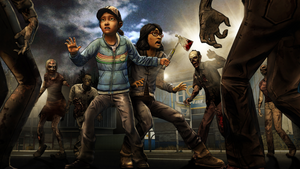 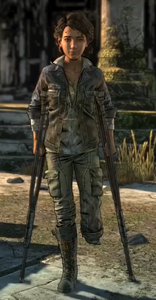 Clementine at the Walking Dead wiki

Retrieved from "https://hero.fandom.com/wiki/Clementine_(The_Walking_Dead)?oldid=1705320"
Community content is available under CC-BY-SA unless otherwise noted.