Cleo's personality is also very similar to her H2O: Just Add Water self, meaning she is still more awkward and insecure compared to Emma and Rikki. She has a vast knowledge of all things ocean, which includes being able to name many of the creatures and plants found around where she lives. Her nervousness does get in the way a few times, one of which is when she tries to get a job in Episode 1.

She cares very much for the ocean creatures, which is evident when she finds a wounded turtle on the beach with her sister. She takes it back to the ocean center where it gets bandaged, and takes many emergency measures to get it back when Miriam Kent accidentally lets him out.

Cleo has long, straight, deep purple hair, violet eyes, and fair skin. In both forms, she has multi-colored beads braided into pieces of her hair.

As a human, her more commonly worn outfit consists of a white tee, blue overalls, and flip-flop style sandals.

In her mermaid form, she wears sparkly white clips which resemble coral, and a matching top with bracelets on both arms. Her tail is deep purple, similar to her hair, with sparkles all down the sides, leading to a translucent end. Her hair also becomes slightly longer, even though her hair is already naturally long.

In the first episode, Emma, Cleo, and Rikki camp out with Lewis at Mako Island while waiting to be rescued after the motor on their boat gets flooded. The girls find it hard to sleep with Lewis snoring, and wander towards a glowing cave, hoping someone is there. Each of the girls fall down a a tunnel in the cave, but find it impossible to escape without swimming, similar to what happened in the teen version of the show. Before they can leave, the pool glows and bubbles, transforming each of the girls' legs into tails.

All three mermaids have the ability to breath underwater, and transform with the touch of water into mermaid form and change back into human form when dry. Cleo can dive to depths no human could withstand. She also had the ability to talk to all sea creatures, from small minnows, to crabs to dolphins and even jellyfish. Each mermaid's power is the same as in the first season of H2O: Just Add Water.

Cleo is gifted with the power of Hydrokinesis, meaning she can manipulate water into any shape she pleases. Unlike her Just Add Water counterpart, Cleo does not rely on a specific hand gesture to use her powers. Cleo's seems to have a stronger form of hydrokinesis though this may just be an advantage of animation. She could project powerful water blasts, summon enough water to carry a baby whale back into the sea, move nearly anything that is submerged in liquid, including a heavy sea gate and create huge tidal waves capable of carrying ships over gigantic rocks and swallowing a jetty. Her power is not only strong but precise. In "Reported Missing" Cleo dipped her finger in a glass of water but protected herself by conjuring a thin layer of air between her finger and the water. Cleo's dreams also had an effect on her powers. In "A Strange Phenomenon" her fear for her dad's safety caused her to activate her powers in her sleep, like sleep walking and conjure large balls of water from over a mile away out in the sea. 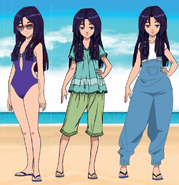 Add a photo to this gallery
Retrieved from "https://hero.fandom.com/wiki/Cleo_Sertori_(MA)?oldid=2084224"
Community content is available under CC-BY-SA unless otherwise noted.