To help Manny and others to return eggs stoled by Squint (succeeded).

Scrat (formerly)
Diego (briefly, when he thought Clint is evil like Squint)

Clint is a main character of Ice Age: The Great Egg-Scapade. He is a friendly rabbit and the brother of Squint.

In his early life, Clint lived with his twin brother and mother in a rabbit hole. His brother later was saved by Gutt and joined his crew, leaving Clint and his mother. One day, Clint learned that his brother, Squint, wanted to get revenge on a mammoth who sunk his crew's ship. He offered to help Manny, Sid, and Diego get the eggs back for Sid's business.

Clint is a friendly and chill rabbit. Clint has a light brown pelt and a white under belly. He has brown-orange eyes and a white tail. 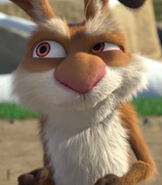