NOTE: This article is about the incarnations of Cloak & Dagger from the Marvel Cinematic TV series. The mainstream versions can be found here: Cloak & Dagger (Marvel).

Cloak & Dagger are the main protagonists of the 2018 Marvel Television series Cloak & Dagger, and will appear in season three of Hulu's Ruanways. They are two teenagers originally named Tandy Bowen and Tyrone Johnson who gets superpowers after the collapse of the Roxxon Gulf Platform, allowing them to manipulate the Lightforce and Darkforce.

Dagger was portrayed by Olivia Holt and Rachel Ryals younger, and Cloak was portrayed by Aubrey Joseph and Maceo Smedley III younger. Holt also played Kim Crawford in Kickin' It, Skylar Lewis in Girl vs. Monster, and Lindy Watson in I Didn't Do It.

After the collapse of the Roxxon Gulf Platform, two teenagers named Tandy Bowen and Tyrone Johnson, gets powers that allows them to manipulate the Lightforce and Darkforce. They decide to call themselves Cloak and Dagger, and fight against their enemy, the Roxxon Corporation. 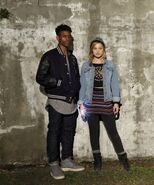