Chronokinetic Alien
Clockwork is the Omnitrix's DNA sample of a Chronosapien from an unknown planet.

Clockwork is a robotic alien with copper skin, black stripes, a clock key on his head. He can has visble gears in a transparent green circular glass in the center of his chest with the Ultimatrix symbol in front.

Due to his robotic body, Clockwork has very low stamina and can tire out quickly. Clockwork is not very durable, as Jennifer Nocturne was able to easily damage his arm with a single shot from Captain Nemesis' glove. Time has no effect on gum balls (as seen in Paradox) and diamonds (as seen in Ben 10,000 Returns), so Clockwork's time rays are useless against those objects. 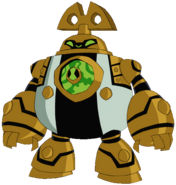 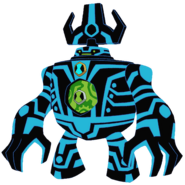 Retrieved from "https://hero.fandom.com/wiki/Clockwork_(Ben_10)?oldid=2143161"
Community content is available under CC-BY-SA unless otherwise noted.