Cloe Santon (also known as Angel) is one of the original four members of the Bratz. She is very likely to appear in any newly released collections.

She was voiced by Olivia Hack in season 1, and by Britt McKillip, who also voiced Princess Cadance, in season 2.

Cloe has platinum blonde hair, light blue eyes, and a pale skin tone. In occasional lines, Cloe has been dyed with colored streaks in her hair (pink, blue, etc.), or with a tanned skin tone. In 2015, she was produced with freckles.

In the TV series, for her usual casual style, she is frequently seen in an outfit inspired by the Funk-Out line: a white tank top and blue denim cargo jeans with a white belt. She also wears dark blue platform wedge heel shoes and she has her Angel logo on her shirt and her long wavy hairstyle from the Treasures line. However, in the first half of Rock Angelz, her hair is inspired by the Funk n Glow Sasha. She also wears silver hoop earrings. Another one of her most frequent outfits is just a simple white tank top with her blue Angel logo, her bright blue Funk-Out cargo jeans with a silver-white belt, her regular hairstyle (the wavy Treasures hairstyle) and lastly, bright blue sports sneakers (the same ones from the Beach Party collection). She also wears this white tank top with a white skirt and silver heeled sneakers with black heels. Cloe’s sportiness can also be observed in her style. In most movies and throughout the web series, Cloe's traditional outfit is a short plaid skirt and a green long-sleeved shirt under a blue t-shirt. She is also often seen in a black and white “couture“ shirt paired with black cargo pants. Another one of Cloe’s iconic hairstyle is braided pigtails, a very common hairstyle in the Bratz universe.

In the second season, another frequent outfit is her pre-jeweled outfit from the Forever Diamondz movie: a black tank top, green pants with black belt (similar to Jade's Style It outfits), and black high heeled shoes. Her hair is similar to Sasha's Funk-Out ponytail (which is Sasha's regular hairstyle in the series)

Cloe is a very playful, dramatic, and smart individual who looks at life through a different lens, always snapping pictures of and filming her friends. She is healthy athletic and full of energy; as such, she loves to participate in a wide variety of sports (such as motor-cross, cheerleading, soccer, and skateboarding). Cloe's signature color is blue, but she also enjoys the color pink. She loves spending time with every member of the Bratz Pack. She is flirty, energetic, clumsy, and imaginative, but her friends help her stay grounded. For Bratz magazine, Cloe is the Advice Column Writer.

Cloe has a strong artistic trait in this film; she loves sketching out fashions and enjoys photography. Cloe was hardly ever seen without her sketchpad. This aspect is seen on Livin' it Up With the Bratz.

Throughout the Bratz television series, Cloe is shown to be a drama queen (Sasha sometimes calls her 'Drama Mama' because of this) - sometimes her imagination runs away with her, but her friends help keep her grounded! In the film Bratz: Passion 4 Fashion Diamondz, Cloe claims to have agoraphobia (a condition where the sufferer becomes anxious in unfamiliar environments, or in situations where they perceive that they have a bit control).

This adaptation of the Bratz shows Cloe (Skyler Shaye) to be very clumsy, constantly falling over and knocking things to the ground. She is shown to be a skilled soccer player despite this, having strong similarities to the TV series. 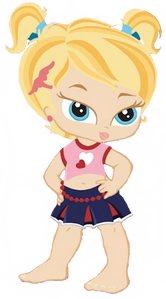 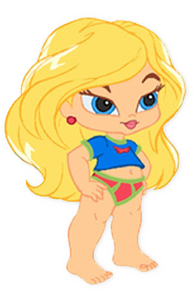 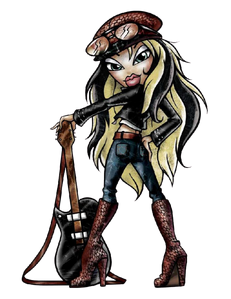 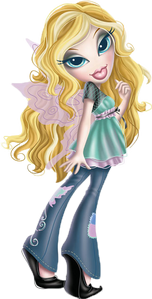 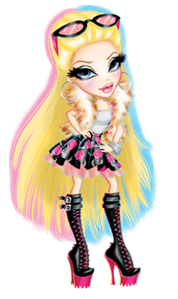 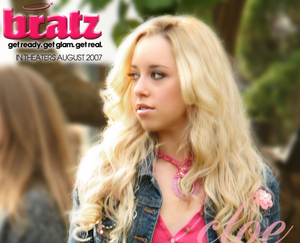 Cloe in the live action film. 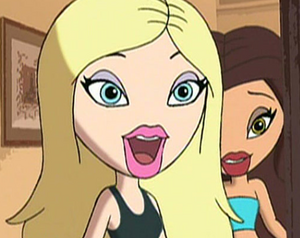 Cloe in Starrin and Stylin' 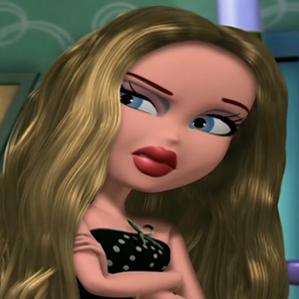 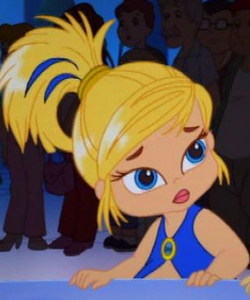 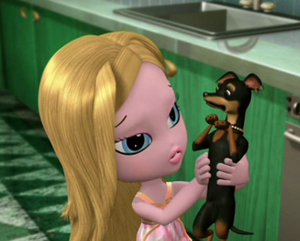 Retrieved from "https://hero.fandom.com/wiki/Cloe?oldid=1963820"
Community content is available under CC-BY-SA unless otherwise noted.