During the Clone Wars

During the creation of the clone army, the Kaminoans made genetic experiments in an attempt to create super soldiers, however physical and mental imperfections and certian defects that resulted from the process that almost hindered the subjects' ability to act as soldiers led to the project to being almost scrapped and the enhanced clones being deemed as "failures". Despite the project being regarded as a failed experiment, four of those experiments came to form Clone Force 99, or, as they called themselves, the Bad Batch. The Bad Batch was indeed an elite group, though their methods were somewhat unorthodox. Despite suffering from genetic defects and being regard as "failures" by their creators and even other clones, the unit eventually earned a legendary reputation in the Clone Wars enough to rival even Delta Squad, another famous clone special unit that action during the war.

The team’s clones were wildly different from each other, with unique personalities and body types: Hunter, the stoic and strong leader; Wrecker, the hot-headed brute; Tech, the intellectual and strategist; and Crosshair, the fast, deadly master of close-quarters combat. The group proved pivotal in the mission to recover an algorithm from Separatist forces on Anaxes.

Clone Force 99 were present on Kaller along with Caleb Dume and Jedi Master Depa Billaba as Order 66 was executed by Palaptine with their clones killing Billilaba. Crosshair fires on Caleb as Hunter tries to protect him while Tech finds out about Order 66 as he escapes. Then they head back to Kamino to find out about Palaptine turning the Republic into the Empire. Tarkin then has Clone Force 99 to kill Saw Gerrera and his band of rebels.

They later head back to Kamino to save Omega but are captured. Then later Crosshair betrays his fellow teammates as his inhibitor chip’s power is increased as the remaining members of Clone Force 99 and Omega escape Kamino. 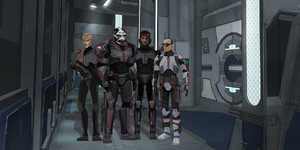 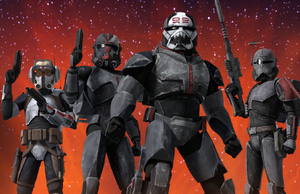 Hunter offers Echo a place among the Bad Batch.

The Bad Batch getting ready to rescue Omega.