Elementals
Cloudjumper is a Stormcutter that appeared in How to Train Your Dragon 2. He is Valka's dragon and it was stated by Dean Deblois that they share a very strong bond that Hiccup admires.

All that is known is he has an owl mannerism and a second set of wings under his main ones that can splay and become an 'X-wing'. His 'X-wing' beat up and down in sync and are probaly used for extremley tight turns and manuevers and for fighting foes. He has a very muscular and sturdy build and walks on 2 legs and 2 wings (as seen on second 0:43 of the trailer). The dragon's face has two long spines that branch off his nose and to the side and he has a "smashed" face, kind of like an owl's. On his back he has spikes that resemble the Skrill's.

Cloudjumper is proud and dignified and as a result is not as playful as Toothless, but kind enough to scatter baby dragons away who trifle with Toothless. He is also sensible to support Valka in many occasions without clear communications. Cloudjumper's pride, large size and confidence leads him to believe that he is the top dragon in Valka's mountain, second only to the Bewilderbeast who is the true King. Though he is mostly serious, he knows how to have fun, such as pouring snow on Toothless.

Hiccup and Toothless run into a dragon rider named Valka, who is revealed to be Hiccup's long-lost mother. She explains that she, like her son, could not bring herself to kill dragons. After being carried off during a dragon raid, she spent 20 years rescuing dragons from Drago's traps and bringing them to an island nest created out of ice by a gigantic Alpha dragon called a "Bewilderbeast", which is able to control smaller dragons. 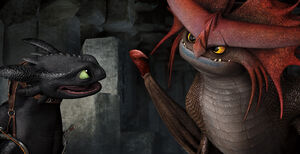 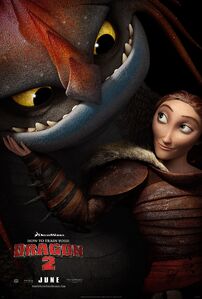 Retrieved from "https://hero.fandom.com/wiki/Cloudjumper?oldid=2142871"
Community content is available under CC-BY-SA unless otherwise noted.