Ability to see a Sleepwalker in his invisible form, claws attack, recruiting the other Travis down cats to his side.

Vengeful Animal
Clovis is one of the main protagonists from Stephen King's Sleepwalkers. He is a Andy Simpsons' pet cat that always helped his owner in the investigating. When his owner is killed by Charles Brady the Sleepwalker, Clovis comes to Tanya's rescue by mortally wounding Charles Brady by scratching him, which also sparks his hostility on the evil Sleepwalker.

After discovering that his owner's killer was not human as any of his attack causes mortal wounds on him, he sought aid from other cats in the town to help him avenge his master along with those whom butchered by the same killer, which also led him to a rescue mission to save Tanya. In spite of some causalities from his side, he succeeds, and gets a new owner in the end.

He was portrayed by the cat Sparks.

Prior to the events of the movie, Clovis was adopted by Sheriff Andy Simpson and lived with him presumably since when he was a kitten (another possible reason why he goes so far to recruit other cat to avenge Andy's death) in Travis, Indiana. It's revealed that he also befriended with other cats as well.

He and Clovis were seen for the first time in the movie playing together inside his car before Charles, whom drives his car in the very high speed. Realizing that Charles was driving too fast, both of them decided to give chase. Clovis meows to supporting him to chase the car, and even warned him when Charles trick both of them to crashed on an oncoming truck. During the chase, Charles even nearly hits the children, much to their frustration. When they finally catch up to Charles, the disguised Sleepwalker mocks Andy and Clovis until Clovis raises his head, where upon seeing him, inevitably temporary ruined the Sleepwalker's disguise. Nevertheless, they still chased him, only for Charles to stage a smokescreen that made them lose his track. Not familiar with the man's nature as the Sleepwalker, he dismissed the experience.

The next day, Andy and Clovis later stumbles upon Charles's car parked near the cemetery. He feels excited as he now had a chance to bring the car's driver to justice. Tanya suddenly comes bursting from the cemetery following her encounter with Charles, who tried to feed off Tanya but failed. After Tanya enters the police car, Charles attacks and a fight ensues. Clovis though that Andy can handle this matter as he simply sit to wait for him to finish the job, until Charles viciously attack him and later, killed him in cold blood. Losing control over watching his owner attacked by the partially transformed beast, the enraged Clovis jumped on Charles and scratches his face, prompted the wounded beast to threw him aside in confusion and panic. After he recovered and the dying Charles left, Clovis approaches Andy's dead body and mourns, unable to save his beloved owner.

Looking for aid from Other Cats

Note: The first paragraph of this section is the speculation about how Clovis convinced the whole cats in the town to surround the Sleepwalker's lair and led them to attack any Sleepwalkers on sight, and may not entirely inconsistent in the events of the movie.

The still-mourning Clovis then left while other police members secured Andy's dead body and escorted the traumatized Tanya back home. He then met his fellow cat friends in the town and told them about his tragic experience with Charles. This alarmed the other cats, whom told him about Sleepwalkers and the dangers that they pose on them and humanity and why humans using their ancestors to detect these monsters and eradicate them to prevent any harm. Some cats that hear about this then support Clovis' statement as they became suspicious of the mysterious newcomers (Mary and Charles that happened to be the Sleepwalkers). Cats that hearing Clovis' story then convince some of their fellow cat friends to amass an army of cats to eradicate the beasts for good from their town, and had Clovis to be the leader.

Soon after, the words about the Sleepwalkers' presence in the town has already spread through the entire town, which causes the whole pet cats to swarmed to their enemies' lair, which some of them led the way to the Sleepwalker's lair.

By the time Mary, who kidnapped Tanya arrived on their house, Clovis and his friends have already surrounded the house. This prompt Mary to crash her car into the house, much to their frustration. Unfortunately, one of his friends recklessly charged on Mary, and ended up with it's spine shattered.

With one of his fellow cat fallen due to it’s reckless action an, Clovis decided to scheme another strategy. Coincidentally, the town's sheriff whom still suspicious with the house came along and met Clovis and the cats. While the sheriff may be oblivious to why he and his friends surrounded the house, Clovis realized that the policeman may not stand a chance, so he decided to risk himself to infiltrate the Sleepwalkers’ house. There, he caught Tanya’s life-force being drained by Charles, only for the girl to resist and gouge his eyes. When the enraged Mary tries to subdue her, he taunts Mary to distract her and he then lungs toward her, allowing Tanya to squash Charles' left eye and have him to bled to death, avenging Andy.

As the sheriff finally entered the house, Clovis discovered that prolonged physical contact on Maya could causes the beast to combust. Realizing this, he was thrown away and called 4 of the cats from the outside to lung toward Mary. This works again where her body began to engulf with smoke. But unfortunately, while the first 3 tries to scratch her back with little to no difficulty, the fourth one make a fatal mistake by trying to scratch her face, resulting her grab it and snapped it’s neck, killing it in process. The sheriff tries to calm Tanya, only for her to runaway to the back door. Upon seeing the partially transformed Mary tossed away the dead cat, he shoots her on the chest, prompting the cat that still attempts to tear her back to jumped away in panic, resulting her revealing her true form.

As the sheriff tries to move her away for safety to the outside, cats that have surrounded the house notices that the front door opens, prompt Clovis to hisses to prompt both humans away. Unfortunately, Mary catches up and throws the sheriff to a nearby bear-trap (the only trap that she could prepare as the cats already surrounded the house), where just as Mary entered the car, she shattered the glass and tries to pull her out. The wounded sheriff to stop her, only for her to grab and impale the sheriff to the picket fence that surrounds the house. As Mary resumes her attempt for claim Tanya’s live, Clovis sees the opening and jumps on to the back of her head which he scratches. As he slashes his paws, he rallies the whole army of cats to do the same.

While many of them scratch her alive, leaving Mary now unable to resist, tries to toss them away but any cat that she tossed away would replaced by another that ready to strike, and her effort proves vain. Just then, one of the attacking cats successfully ignites the flame on her cheeks like a lighter, which triggers the chain reaction on her wounds that sets her body ablaze. Fortunately, the attacking cats managed to move away for safety, as they watch Mary engulfed by flames and dies, but not before she releases a final scream, “YOU KILLED MY SON!!! MY ONLY SON!!!”

Checking Tanya and After The Battle

After she's finally gone for good, Clovis jumped onto the car to check Tanya’s condition, whom hugs him and thanks her for their effort.

Clovis' personality is not so different with the domesticated cat in real life, as he was loyal to Andy and follows his owner wherever he go, even in investigating. Aside cute and friendly, he also has a surprisingly high charisma among the other cats in the town where he lived, something which apparent at the climax where he able to recruit a large number of cats to his side, which the surprising numbers implies that he has recruited the entire population of cats in the town where he lived. Not meant to exaggerating, having lived with authorities in his life, he also shares their keen senses on something that looks suspicious and also inspired by them to look after the innocents from harm.

In spite of his good nature, Clovis has a darker side of his personality. Both his fierce loyalty on his owner and willingness to protect the innocents drove him go to extreme measures to protect those he cares about and innocent souls, even if it means harming and even killing enemies. The most notable displays of Clovis's darker side were shown when he had some of his fellow cats allies burned Mary to her agonizing death simply by biting her and mercilessly attack and even nearly killing Charles Brady after the latter killed Andy in cold blood. He even shown indifferent with those whom he killed, at least on the two Sleepwalker's case as both of them are killed many innocent people and also a number of policemen in the town whom he may have befriended with. Fortunately, this brutality only shown on his enemies alone and those who he perceived as threat on both himself and those whom he cared about. 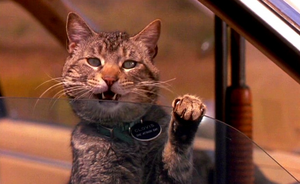 Clovis as he appears in the movie 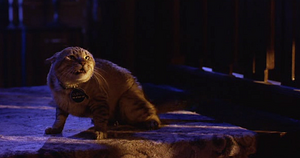 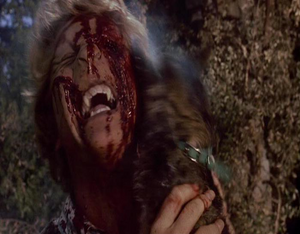 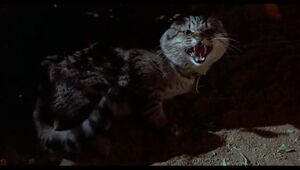 Clovis screeches on two humans (the presumed means likely "Run! Get out of here!"). 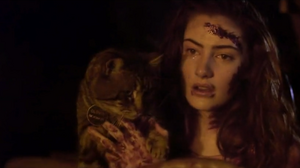 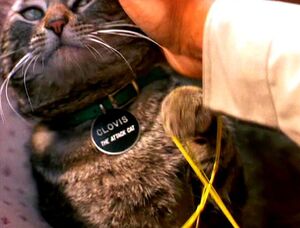 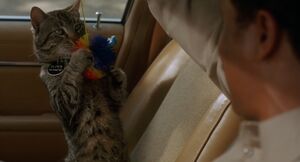 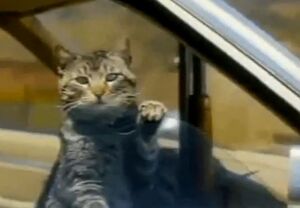 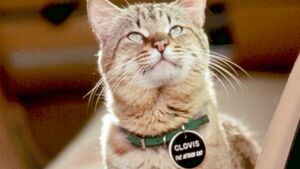 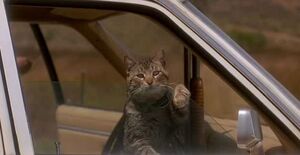 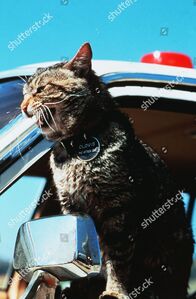 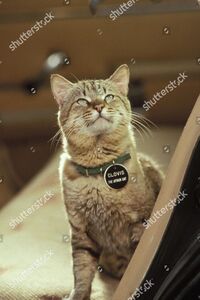 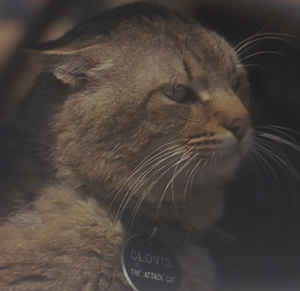 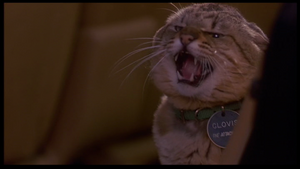 Clovis about to attack Charles Brady for murdering his owner Andy Simpsons. 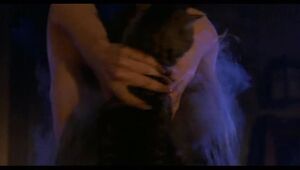 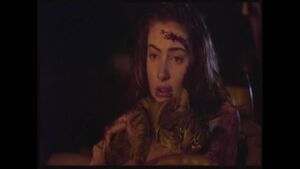 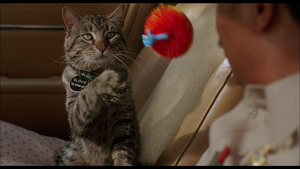 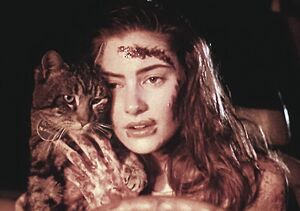 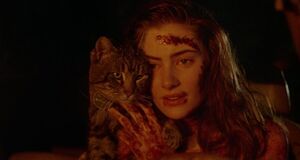 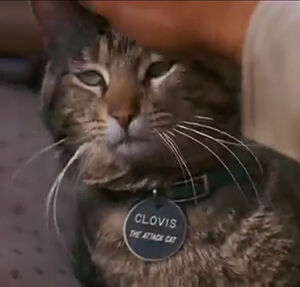 Retrieved from "https://hero.fandom.com/wiki/Clovis?oldid=2178865"
Community content is available under CC-BY-SA unless otherwise noted.