Coco is a cream-coloured tanuki and one of the mascots in Yes! Pretty Cure 5 and its sequel. He has the unique ability to transform into a human at will, but quickly changes back to mascot form if he gets slightly hurt or if he is weak. When in human form, he is the teacher of L'École des Cinq Lumières in order to be close to Pretty Cure while also searching for Pinkies for the Dream Collet in order to get a friend of his back and to save his kingdom.

He is voiced by Takeshi Kusao.

Coco is kind and deeply caring, almost the completely opposite from his best friend Natts. Coco trusts people rather easily, and is ready to reveal his mascot form to save innocent people. In his human form; he's calm, wise and nice. In his true from; he gets happy and energetic. He enjoys hanging out with his friends as Nuts always read books back in Palmier. He's worried about his Kingdom was invaded by Nightmare and Nuts injured and trapped in the Dream Collet. He would do anything to save them that he tried to steal the Dream Collet from Nozomi. Even though he's kind, he sometimes gets mad and go strict to the someone that did something wrong or drastic. When Syrup held a grudge against him, Coco was deeply saddened and bothered, as he felt guilty and does care about Syrup as much everyone else; even having kept him company and tried to help him in Palmier Kingdom.

He has/develops a crush on Nozomi as the series go on. When Nozomi loses her balance and nearly fell, Coco's always there to save her. This shows that he's protective of her and worries about her sometimes. He will even stand up for her, even if the person he's facing is a member of Nightmare.

As we all know, Coco can be able to transform into a human like (some of) the mascots in the Yes! Pretty Cure 5 world and take the name Koji Kokoda. In Yes! Pretty Cure 5 GoGo!, Coco is able to use the power of his Palmier crown to give Pretty Cure the Cure Fleurets, and together with Natts' crown, they give Cure Dream and Milky Rose the ability to combine their powers.

In Yes! Pretty Cure 5 GoGo!: Okashi no Kuni no Happy Birthday!, Coco (in his human form) is able to blast black spheres from his hand and almost have the same combat/fighting skills as the Precures when he was brainwashed. It's unknown if Mushiban or Palmier crown granted these powers. And also in the part of the movie, he, along with Natts, jokingly uses the power of the Miracle Lights to transform into Cure Coco the Cure of Cream, who, along with Cure Natts, forms the duo Coconuts. He uses the same accessories as Cure Dream, hitting their special bond. Cure Coco only appears as a joke to explain how the use of the Miracle Lights will create a miracle to the audience. 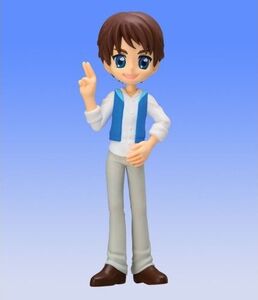