Shopping at her favorite store

Become a huntress. Kill the Grimms for destroying for favorite store. (succeeded)

Coco Adel is a supporting protagonist of RWBY. She is the leader of Team CFVY. Her weapon of choice is a handbag that can transform into a mini-gun. She is first seen in "Field Trip", after returning from fighting the Grimm.

She is one of the main protagonists of the 2019 novel RWBY: After the Fall and 2020 novel RWBY: Before the Dawn.

She is voiced by Ashley Burns in the English version and Shizuka Itō in the Japanese version.

Team CFVY was initially supposed to handle the arrangements for the Beacon Dance, but due to unforeseen circumstances in their mission, that duty is passed to Team RWBY. Coco returns with her team from their mission just as Team RWBY is heading out on their first assignment.

After a group of Grimm launch an attack on Vale using a breach created by the White Fang, Coco and the rest of her team, assisted by Professor Peter Port, arrive in a Bullhead to provide reinforcements for Team RWBY in confronting the threat. After Fox Alistair destroys a horde of Grimm, Coco compliments him and takes over in the fight. Coco takes down several of the creatures with her weapon still in its compact hand bag form.

She stops Velvet Scarlatina from using the weapon that she was about to use and then switches the hand bag to a large minigun form. With it, she easily takes down several Beowolves, Ursai, a Death Stalker, and an entire flock of Nevermore.

Coco and her team are competing in the Vytal Festival tournament, representing Beacon Academy and the kingdom of Vale. After Team CFVY wins their (off-screen) match in the team round of the tournament, Coco and Yatsuhashi Daichi are selected to represent them in the doubles round. They are "randomly" matched with Emerald Sustrai and Mercury Black, but unknown to them, this match was actually rigged by Cinder Fall.

During the match, Coco and Yatsuhashi are thoroughly outclassed by Emerald and Mercury. After being separated from her teammate, Coco apparently hallucinates Yatsuhashi being with her, but in actuality he was already eliminated. It is later revealed that this was actually an illusion cast by Emerald to confuse her. Both Coco and Yatsuhashi are eliminated without managing to defeat either of their opponents, in what is described as a major upset.

She makes a small cameo in "Fall".

After Yang Xiao Long breaks Mercury's leg after her fight against him, Velvet tells Ruby Rose about Coco's fight against Emerald and Mercury as an instance of stress-induced hallucination. The two of them believe Yang and Coco experience the same thing.

Coco is present at Amity Colosseum for Pyrrha Nikos' ill-fated match against Penny Polendina. She is also present when a Giant Nevermore breaches the defenses of the city and begins attacking the stadium.

Coco is among the group of students present at Amity Colosseum at the beginning of this Grimm attack on Vale. After the Giant Nevermore breaks into the stadium and is defeated, she is among the students that choose to fight this battle rather than flee. The group takes an Air Bus to Beacon where they begin to fight the Grimm.

When the students have trouble defeating an Atlesian Paladin-290, she tells Velvet to use her weapon. The rabbit Faunus defeats two Paladins before being knocked out by one. Coco and others fight the mech that incapacitates Velvet until Weiss Schnee defeats it by summoning the right arm of an Arma Gigas. Soon after, a more advanced Paladin charges them, but it powers down before it can reach them.

Coco is a teenage girl with fair skin, short dark-brown hair, and dark-brown eyes. She has wavy locks on one side of her face, dyed with a gradient that starts in dark brown and transitions to a caramel color.

Her clothes consist of a long, cocoa-colored shirt with a dark brown waist cincher. She wears long, dark brown trousers with ribbons on the left side and a brown belt with bullets.

Above it, she wears another cocoa-colored belt of bullets with a gold crosshairs buckle. What appears to be a drape of black skirt hangs on her right side. She wears a pair of dark brown, high-heeled leather boots with buckles.

Coco also dons a number of accessories, such a bracelet with black roses as decoration; these are accompanied by black gloves and necklaces. She wears a beret of a darker brown and a pair of black, wire-rimmed aviator sunglasses. She is seen holding a black shoulder bag with gold studs, which is held by a bandoleer strap; the bag is her weapon, transforming into an over-sized black and gold mini-gun.

Coco appears to be very confident: her self-assurance is expressed in the very way she struts down the battlefield. Her experience with Grimm has been consistent enough that their appearance no longer fazes her. Coco is confident enough in her team that she holds Velvet Scarlatina back from combat when she tries to unleash her weapon believing Velvet should wait until their was a more dangerous enemy. She is also seen slapping Fox Alistair on his butt as she compliments his performance hinting she can be flirtatious .

Her confidence is later seen once more in "Lessons Learned" when she explicitly states liking Emerald Sustrai after her initial taunting of her. There is also a touch of sportsmanship and open-mindedness in showing appreciation for Emerald despite being opponents who sass each other.

The confident, self-assured way Coco carries herself however can be disrupted. This is first seen during the episode "Lessons Learned", when her hands began trembling after realizing she saw Yatsuhashi Daichi when he was not actually there.

Given her attire and her reaction to both the Grimms' destruction of her "favorite clothing store" and her sunglasses getting damaged in the course of her duel with Emerald, showing how much fashion seems to be integrated into her overall personality.

To some extent, Coco exhibits superhuman strength. Her weapon is a massive mini-gun hidden in shape of a designer handbag. The ease with which she swings it around to use as a bludgeon in bag form belies its high mass; most others would struggle to lift it, let alone use it as their weapon. Her strength is also needed to utilize the mini-gun mode, as the rotational inertia of the barrels and the recoil are extremely high and would normally require emplacement to avoid losing control. Her weapon trades accuracy for volume of fire, so small and/or fast targets can ultimately avoid her shots.

In combat, Coco does not depend on her weapon, as she is shown kicking a large Grimm to the ground before staring it down. In its gun form, her weapon is also capable of tearing Grimm into tiny splinters, making her the ideal choice for clearing large packs. She effortlessly shreds a Death Stalker, followed by multiple giant Nevermores using her mini-gun; it previously required the combined effort of Team RWBY and Team JNPR to put down one of each. Unfortunately, her weapon has little effect on an Atlesian Paladin, as shown in "Heroes and Monsters"; this indicates her weapon is reliant on penetrating her target's armor to do any damage.

In "Lessons Learned", she and Yatsuhashi were outmaneuvered and ultimately beaten by Mercury Black and Emerald. Despite being able to deliver a high volume of fire, she was unable to score any hits whatsoever on either opponent with her mini-gun. Coco was able to use it to block some of Mercury's strikes even in its mini-gun mode, further exemplifying her super-human strength. In close combat, she attempted to use her handbag, but this was likewise ineffective. This could indicate that she is vulnerable to more agile enemies.

Coco seems to be mostly a heavy hitter with little-to-no maneuverability when handling her weapon; during her match against Emerald and Mercury, she relied entirely on Yatsuhashi to defend her. After being dragged away by Emerald, however, she displayed enough agility to dodge Emerald's bullets with relative ease, but had to stow her mini-gun to do so. 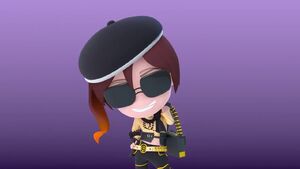 Coco Adel on the RWBY wiki.