Cody Travers is a video game character and a hero from both the Final Fight and Street Fighter series. He has been fighting his way to survive the harsh slums of Metro City since he was a kid. He has since then become the city's new mayor.

In the original Final Fight, Cody's girlfriend Jessica (the daughter of Mayor Mike Haggar) is kidnapped by the gang MAD GEARS which leads Cody to join Mayor Haggar in his quest to take revenge on the gang and rescue Jessica. As a friend of Jessica and Cody, Guy joins Cody and Haggar as well. Cody is not a playable charcter in the Final Fight Series after the first game. His absence from the second game was explained that he has married Jessica and is on his honeymoon.

He is seen in Guy's background in Street Fighter Alpha 2 with Jessica and the rest of the Final Fight Cast. Cody's appearance in Street Fighter Alpha 3 was a surprise to most fans as his life has suddenly taken a downward spiral and he is now an escaped convict. During the events of Final Fight Revenge, Cody is framed by the remaining Mad Gear gang for their crimes, presumably including foul play regarding Jessica (who is missing in Revenge), and sent to prison. It is also revealed that Poison has feelings for Cody, and comes to visit him, though she knows his heart belongs to Jessica. His time in prison has made him jaded and cynical, openly mocking the concepts of heroism and justice. In his Super Street Fighter IV ending, he dismisses Guy's assertion that he's still a champion of justice, saying "Yeah, I'll return all right. To my cell. That's where I belong."

Cody appears in Super Smash Bros. Ultimate as a novice-ranked primary grab-type spirit that gives the user a strong throw. His spirit battle is a stamina battle against Richter Belmont with increased powers on battering items on New Donk City with reduced jump.

Cody is addicted to fighting. He once was a regular youth in Metro City, and was dating the mayor's daughter Jessica. When she was kidnapped by the gang Mad Gear, Cody, Guy and Haggar set out to rescue her. He eventually defeated the leader of Mad Gear, Belger. Cody eventually left Jessica and soon after, Poison managed to frame him for a crime, and he was thrown in jail.

During the events of Street Fighter Alpha 3, there was a prison riot and Cody managed to escape. During his travels, he reunited up with Guy and also ran into Rolento, who wanted him to join his militant movement, but Cody refused. Guy wanted to get Cody back on track in his life, but Cody claimed that he was no hero and only lived for fighting these days. The two of them had a battle soon after their conversation, and once they cooled down, Guy accepted the fact that his friend had to live his own life. Guy asked if Cody would stay in Metro City but Cody said he still had traveling to do, and the two parted ways. Guy bid him farewell, realizing that deep down inside, Cody is still a good person.

After spending all those years in jail, Cody has become very apathetic, his attitude changing completely from when he was a hero. He also seems to harbor a little resentment of the outside world, musing that he fought solely for the sake of the city and still ended up in jail despite his intentions. Apparently bored of his jail life, Cody "casually" breaks out of prison. Telling the terrified guard that he'll be back later, he ventures outside. While out, Cody looks up at a familiar face that he hasn't seen for a while; his old friend and rival Guy. Cody's main motivation seems to be finding a way to alleviate his boredom by participating in S.I.N's tournament.

In Street Fighter V: Arcade Edition, Mike Haggar exonerates Cody of his crimes, which leads to him being the new mayor of Metro City. Though he constantly complains, Cody secretly finds a glimmer of joy in his new position. 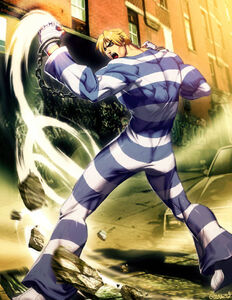 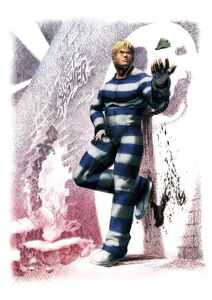 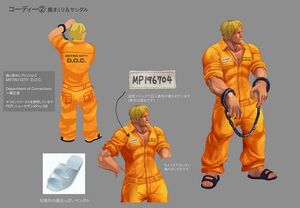 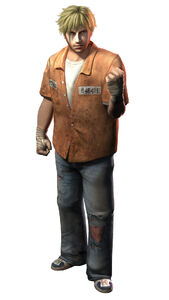