None (She can't stand nicknames)

Relaxing, getting manicures and pedicures

Colette is one of the main characters of the Thea Stilton book series, the cross-over series of Geronimo Stilton.

Colette was a teenager from Paris, France and she once lived with her cousin Julie but she moved to Whale Island, where she would go to a school there called Mouseford Academy. There, she met four other mouselings: Nicky, Pamela, Paulina, and Violet. They were flown there by a hydroplane piloted by a reckless Vince Guymouse, and in the process nearly hit the boat of Thea Stilton, who was also going to Mouseford Academy. She was pleased that Thea gave Guymouse a peace of her mind.

Later on, she was shown with the others heading for Mouseford Academy and she has Vince carry her stuff. It is shown here that she does not get along with Violet. Their fight is stopped by Pamela and Paulina.

Later on, she travels with the others down a cellar when a mouse named Hans Ratson disappears. They fail to find him and leave. The five them research the cellars. In the process, she becomes friends with Violet. They enter the cellars again and enter a stone dragn's mouth. She triggers a booby trap and causes them to fall underground, where they find Hans Ratson hanging upside down. Thea and Octavious de Mousus, the headmaster, arrive and Hans is revealed to be Bartholomew Sparkle, a former student who had wanted to check out the booby traps and ended up stuck. After the incident, the five mouselings form a group called the Thea Sisters.

Colette wears pink jacket with beads on it, a blue turtle neck, long pink pants and a blue belt. She has light brown fur, blond hair and blue eyes. She is seen mostly carrying a small blue and pink heart bag. She always shows off her midriff in her usual outfit, which is very sexy.

In Thea Stilton and the Spanish Dance Mission, Colette's back and front hair is more straighter rather than her usual curly hair. Also her bangs is not higher as her usual one 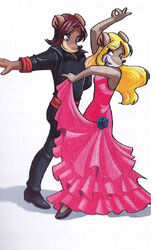 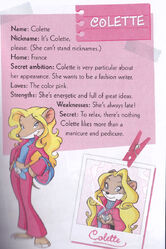 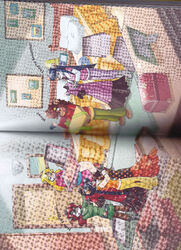 Add a photo to this gallery
Retrieved from "https://hero.fandom.com/wiki/Colette?oldid=1834083"
Community content is available under CC-BY-SA unless otherwise noted.