Director of the Secret Service

To arrest those who threaten society

No information
Colonel K is a character in the television show Danger Mouse.

Colonel K is an antromorphised chinchilla (ground squirrel) who is Danger Mouse and Penfold's boss. He once a former kleptomaniac who afterwards worked for a Police force called Special Branch earning him the nickname "Special K". He often contacts them from his office giving them instructions of their latest mission near the beginning of every episode and debriefs them near the end, though some in some episodes, it based on him such as Baron Greenback entering his brain by a shrinking device to gain top secrets and held hostage a few times.

In the episode The Return of Danger K, it's revealed that in his younger years, Colonel K was an agent himself called Danger K.

Colonel K is sometimes absent minded and talks nonsense which annoys DM and Penfold, though he gets annoyed with them for not responding instantly to his call. He likes to keep himself occupied with sports and other pastimes. So far he has also been a champion piano thrower, a decorated judo expert, the first to climb Mount Everest on a Pogo stick, has been a Eskimo and taken up tap dancing. He is extremely jolly and loves joke puns. He always says "Good show" whenever DM and Penfold respond to his transmition and "Over and Out" when he finishes though he sometimes forgets. Despite his tendency to be annoying DM and Penfold are pleased to have him as their boss. 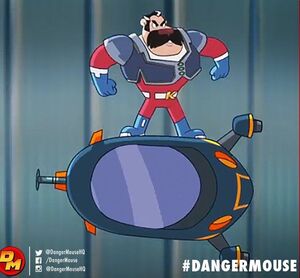 Colonel K as Danger K
Add a photo to this gallery 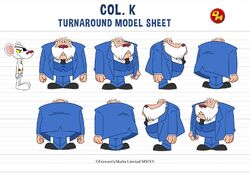 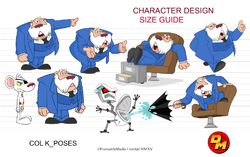 Retrieved from "https://hero.fandom.com/wiki/Colonel_K?oldid=2221739"
Community content is available under CC-BY-SA unless otherwise noted.