Colonel Stars and Stripes is one of the main protagonists in Kick-Ass 2.

He is portrayed by Jim Carrey who also played The Mask, The Grinch, Lloyd Christmas, Ace Ventura, Horton and Tom Popper.

Colonel Star and Stripes was once a paid petty criminal who has been working for the drug trafficers, mafia boss and antagonist of the first film, Frank D´Amico. But the actions of the superheroes Kick-Ass, Hit-Girl and Big Daddy convinced him to leave the crime behind him and become a faithful Christian.

At the time of action, he has become a superhero who dresses up at night to fight against crime. He ist the founder and leader of Justice Forever. And along with the other superheroes, he participated in several charitable events, or does minor exploids to accompany such as drunk girls evening on her way home, so that they are safe. But finally takes Justice Forever under his leadership also a big coupe against crime. They smashed a criminal ring that has asian girls forced into prostitution. But that´s what makes the supervillain Red-Mist aka Chris D´Amico noticed him.

He founded his band of supervillains, Toxic-Mega Cunts, and coat the headquarters of Justice Forever. There they meet him, and the supervillain Mother Russia kills him very brutally.

But later he is avenged by Hit-Girl, who kills Mother Russia.

Colonel Stars and Stripes in the Comics 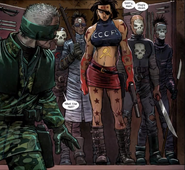 "Yeah there's a dog on your balls" 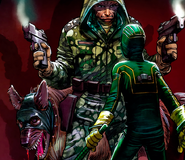 Mother Russia kills Colonel Stars and Stripes
Add a photo to this gallery
==
Retrieved from "https://hero.fandom.com/wiki/Colonel_Stars_and_Stripes?oldid=1503448"
Community content is available under CC-BY-SA unless otherwise noted.