Heroes Wiki
Register
Don't have an account?
Sign In
Advertisement
in: The Simpsons Heroes, Cartoon Heroes, Male,
and 32 more

Jeffrey "Jeff" Albertson, better known as Comic Book Guy, is the overweight, geeky proprietor of Springfield's local comic book store, The Android's Dungeon and Baseball Card Shop. Though thought to be an antagonist, he is sarcastic, surly, and insulting at certain points.

Comic Book Guy is a very obese, socially incompetent, unshaven, cruel man who is perhaps best known for his sarcastic quips. He holds a master's degree in folklore and mythology (he translated The Lord of the Rings into Klingon as part of his thesis). He exhibits geeky behavior to an extraordinary and deliberately unrealistic degree, and often also makes references to obscure subjects or internet culture. His catchphrase is the declaration, "Worst... (episode)... ever". He states that he is a 45 year-old virgin who lives with his mother. His obesity has been stated on The Simpsons: Hit and Run, where he can be used driving you around in his car, when one of his replies is that he might as well pick you up, since he can't fit into his office chair anymore. Comic Book Guy is extremely overweight to the point to were his clothes barely fit. He also at one point suffered from lumbago.

Comic Book Guy is the middle-aged, overweight, almost fanatical comic buff and displays deep passion regarding all fictional memorabilia in general, especially science fiction to the point of complete monomania. Sarcastic, irate and proudly geeky, Comic Book Guy does not treat anyone with kindness unless they are as passionate about comics as he is, with the exception of Otto and Stan Lee. Most of the characters infamy and trademarks are derived from his constant sarcastic observations, quips and distinct accent. Comic Book Guy's Obsessive-Compulsive fixation with comics is such that when somebody placed a Spider-Man comic inside The Spectacular Spider-Man slot, it was enough to drive him angry. He is so stressed about people's comic book ignorance around him that it caused him to have a heart attack, which Hibbert calls his profession as owner of a comic book store as one of the most stressful jobs in the world, referring to it as the "widow-maker" (if any [comic book store owners] had wives). 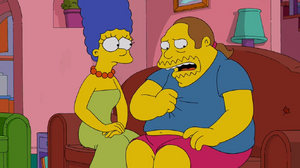 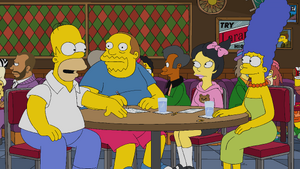 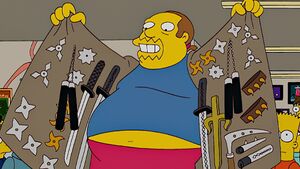