CC-5052 nicknamed Bly was a clone commander that served in the 327th Star Corp who fought alongside Jedi General Aayla Secura during the Clone Wars.

Clone Commander Bly served with the 327th Star Corp that was led by Aayla Secura. He was part of the first wave of clone commanders trained by the Advanced Recon Commando (ARC) troopers. He had formed a bond with his Jedi General, and numerous battles had given the 327th a reputation for courage while under Separatist fire. Bly's focus is entirely on the success of each mission.

Commander Bly has come to admire his Jedi General, respecting Aayla Secura's toughness in a fight and her understanding that personal feelings aren't as important as success. He wishes other Jedi were as focused on their missions as well.

Bly and Aayla fought on a number of battles during the war. When they were attacked by the Separatist fleets and forced to crash land on the pacifist planet Maridun along with injured Jedi Knight Anakin Skywalker Padawan Ahsoka Tano and Clone Captain Rex. Together they protected the Lurmen and defended them against the Separatist Lok Durd's war machine.

Commander Bly and Aayla later went to the exotic fungi planet Felucia to hunt down Separatist Leader Shu Mai when Bly received Palpatine's Order 66. Without a second's hesitation, the clone soldier guns down the Jedi Knight he had served with on so many perilous missions. After turning against the Republic, Bly served the newly-formed Empire. 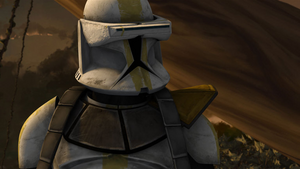 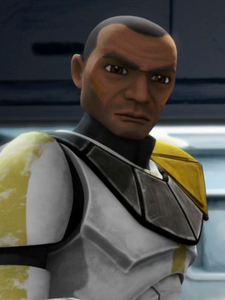