Start a Wiki
Commander Fil was clone commander who served under Kit Fisto in the Star Wars series.

During the Clone Wars, Fil was commissioned to lead clone trooper squad with Kit Fisto and his former padawan to recapture Nute Gunray who was saved from custody by Asajj Ventress. The Jedi tracked Gunray to a moon of Vassek. Fisto, his padawan, Fil and the clone troopers entered the castle and overheard Gunray talk to a group of battle droids. They destroyed the droids and turned the chair around to find that it was a hologram of Viceroy Gunray. Dooku later appeared in hologram form as Gunray's hologram disappeared. Dooku informed the group that while Gunray was unavailable for detaining, there was an alternative prize.

From observing the castle, Fisto realized that they were in the lair of General Grievous and they have good opportunity to capture him. Grievous returned to his lair and killed the clone troopers leaving Fisto, his padawan and Fil. Gor attacked the group and killed Fil. 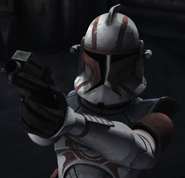 Add a photo to this gallery
Retrieved from "https://hero.fandom.com/wiki/Commander_Fil?oldid=1743190"
Community content is available under CC-BY-SA unless otherwise noted.