Agent of the Citadel's Special Tactics and Reconnaissance

Commanding Officer of the Normandy
N7 Marine of the Systems Alliance

He/she is assigned to the SSV Normandy SR-1 (Systems Alliance Space Vehicle Normandy Stealth Reconnaissance-1) as the leader of his/her own squad in a desperate mission to stop the Reapers, a race of sentient machines bent on destroying all organic life in the Milky Way galaxy.

His/her appearance, specialization and skills can be customized depending on the player. The default names are John Shepard for males, and Jane Shepard for females, though only the first names may be customized.

Shepard was born on April 11, 2154, is a graduate of the Systems Alliance N7 special forces program (service no. 5923-AC-2826), a veteran of the Skyllian Blitz, and is initially assigned to the SSV Normandy as Executive Officer in 2183. Shepard later becomes the first human to join the Spectres, an elite special task force for the Citadel Council.

His/her background depends on how the player selected; he/she could be born as a Spacer, as a Colonist, or on Earth. Psychology can also be chosen by the player, be it a War Hero, Sole Survivor, or Ruthless. Alternatively, the player can choose the default pre-made Shepard as a male Soldier named John, with the Earthborn/Sole Survivor profile.

If Shepard was a Spacer, both of his/her parents were in the Alliance military. Shepard's childhood was spent on ships and stations as they transferred from posting to posting, never staying in one location for more than a few years. Following in their parents' footsteps, Shepard enlisted at the age of eighteen.

Shepard can have a short conversation with Hannah Shepard, through an assignment that is only available with this background. In both of the other backgrounds, Shepard's parents are deceased or otherwise absent.

If Shepard was born on Earth, he/she was an orphan raised on the streets of the great megatropolises covering Earth. Shepard escaped the life of petty crime and underworld gangs by enlisting with the Alliance military when Shepard turned eighteen.

Shepard has a unique assignment with this background. A member of a gang Shepard belonged to in youth will approach Shepard outside Chora's Den in the Citadel Wards. Shepard is asked to help free a member of the gang from a turian in the bar.

If Shepard was a Colonist, then he/she was born and raised on Mindoir, a small border colony in the Attican Traverse. When Shepard was sixteen, slavers raided Mindoir, slaughtering Shepard's family and friends. Shepard was saved by a passing Alliance patrol, and Shepard enlisted with the military a couple years later.

Shepard has a unique mission with this background. When exiting the docking bay elevator, Shepard will receive a request to help a fellow survivor of Mindoir, who was taken by slavers during the raid on Mindoir when Shepard was sixteen.

Following a selection of pre-service history, the player must choose a psychological profile: Sole Survivor, War Hero, or Ruthless - each of which relates to a specific event in Alliance history and places Shepard in a prominent role.

During Shepard's service, a mission that Shepard was on went horribly wrong. Trapped in an extreme survival situation, Shepard had to overcome physical torments and psychological stresses that would have broken most people. Shepard survived while all those around him/her fell, and now Shepard alone is left to tell the tale. The Sole Survivor's unit was slaughtered in a thresher maw attack on Akuze.

Sole Survivor Shepard begins the game with both bonus Paragon and bonus Renegade points, and has special dialogue in the "UNC: Dead Scientists" assignment.

Early in Shepard's military career, he/she found themselves facing an overwhelming enemy force. Shepard risked his/her own life to save fellow soldiers and defeat the enemy, despite the impossible odds. Shepard's bravery and heroism have earned Shepard medals and recognition from the Alliance fleet. War Hero Shepard almost repelled an attack by batarian slavers on Elysium single-handed, earning the Star of Terra, the Alliance's highest honor.

War Hero Shepard begins the game with bonus Paragon points, and has special dialogue in the "UNC: Espionage Probe" assignment.

Throughout Shepard's military career, he/she has held fast to one basic rule: get the job done. Shepard has been called cold, calculating, and brutal. Shepard's reputation for ruthless efficiency makes Shepard's fellow soldiers wary of him/her. But when failure is not an option, the military always goes to Shepard first. Ruthless Shepard sent 3/4ths of his/her unit to its death and murdered surrendering batarians on Torfan.

Ruthless Shepard begins the game with bonus Renegade points, and has special dialogue in the "UNC: Major Kyle" assignment.

Shepard's journey started on the Normandy, serving under Captain David Anderson, as he/she was sent to the human colony of Eden Prime to investigate a strange beacon and retrieve it covertly. The strange beacon turned out to have belonged to an ancient race known as the Protheans, and brought a vague warning of the impending Reaper invasion.

Though Shepard worked for the Citadel, the Normandy remains considered to be under Alliance jurisdiction and her unique design means Shepard was often asked to complete missions for Fifth Fleet's commanding officer Steven Hackett, especially those requiring discretion. Throughout the journey, Shepard faced many adversaries and was forced to make many sacrifices, but he/she eventually found out that Saren had been indoctrinated by Sovereign, his personal ship.

Using the rogue Spectre, the Reaper and the geth forces laid siege to the Citadel, but Shepard and the Normandy, along with the units of the Alliance Navy, went after them and eventually defeated both villains, saving the lives of the non-human councilors in the process. Afterwards, Shepard nominated Captain Anderson to be the human councilor and left for the Terminus Systems, knowing that the Reaper threat was very real and that the galaxy needed to prepare in order to stand a chance at defeating the Reapers. However, the councilors disguised his/her actions as mere scouting missions to wipe out the remaining geth forces.

During a patrol in the Amada System, the Normandy was ambushed and destroyed by a Collector cruiser, with Shepard asphyxiating to death following a suit breach and reentry into the planet Alchera. His/her corpse was recovered by the human-supremacist terrorist organization Cerberus, and reconstructed via Lazarus Project under the surveillance of Cerberus operative Miranda Lawson.

The reconstruction went smoothly and Shepard returned to what he/she had been before the Collector attack. After escaping the facility where he/she had woken up, due to the activities of a Cerberus traitor, Shepard met with the Illusive Man, the mysterious leader of Cerberus, who tasked him/her with investigating mass disappearances from human colonies. It was on one of these colonies, Freedom's Progress, that Shepard learned the existence of the Collectors.

Shepard was assigned by Cerberus to investigate what the Collectors were planning to do with the abducted colonists, whilst also being given dossiers on people to recruit, which surprisingly included two familiar faces: Garrus Vakarian and Tali'Zorah vas Neema, along with a new ship, the Normandy SR-2. The rest of his/her former friends were either busy with their own activities or refused to join Shepard due to him/her working with Cerberus.

Shepard had checked in to the Citadel since their demise two years ago, and went to meet their former commanding officer, Councilor Anderson, in the Presidium to attend a holographic meeting with the Council. Despite the Council not wanting to help Shepard due to the Illusive Man's manipulation, Anderson was able to persuade them to reinstate his protege's Spectre status.

Shepard also regained contact with Admiral Hackett, who sent an email to the Commander requesting for him/her to honor his/her fallen ship, SSV Normandy SR-1, with a monument on Alchera's surface and be the first to walk on the crash site, retrieving the dog tags of the lost crew members and his/her N7 helmet before sending his/her findings back to the Alliance.

Whilst Shepard and the squad were away on a mission, the Collectors attacked the Normandy again and abducted most of its crew members, taking them to the Collector base. Shepard rushed to their rescue along the way, destroying the Reapers' attempt to create a human Reaper. He/she destroyed the base with reactor overload, despite the Illusive Man warning Shepard that he/she should instead preserve the base so Cerberus could use its technology in the fight against the Reapers. Then, Shepard proceeded to sever his/her ties with Cerberus, much to the Illusive Man's anger.

After the battle with the Collectors, Shepard was put under six-month house arrest on Earth either for destroying Alpha Relay in batarian space to stall the Reapers' early arrival or for working with Cerberus. During a hearing, the Reapers attacked and quickly overwhelmed Earth, forcing Shepard to retreat on the Alliance-refitted SSV Normandy SR-2 and forge alliances with various races of the galaxy in order to liberate Earth and quell the Reaper threat.

However, Cerberus had now become enemies with Shepard, due to the Illusive Man wanting to harness control of the Reapers in order to establish human dominance in the galaxy. Through many hardships and sacrifices, Shepard managed to unite the various races of the galaxy and stood ready to battle the Reapers thanks to a newly recovered weapon left behind by the Protheans, the Crucible.

Making his/her way to the Crucible's core within the Citadel, he/she was confronted by the very being directing the Reapers: The Catalyst. The Catalyst explained to Shepard the purpose of the Reapers and admitted that it would accept whatever Shepard decided to do: Destroy the Reapers, sacrifice his/her life to control them, or merge his/her DNA with the Reapers, turning everyone into a new species. Regardless of what decision Shepard took, the Reaper threat was ended once and for all.

Shepard could also refuse to play by the Catalyst's rules and die fighting the Reapers to the last man. In that case, it turned out that as a fail-safe, Shepard had ordered Liara to create a message about how to defeat the Reapers to be sent to the next cycle of life, in which case, the species from the next cycle would build the Crucible in an earlier time and defeated the Reapers before things went out of control. 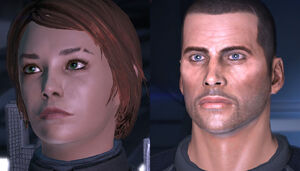 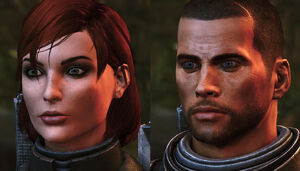 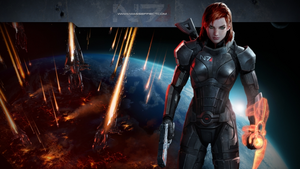 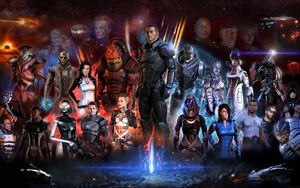 John Shepard and his crew. 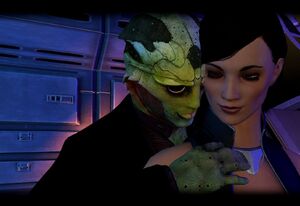 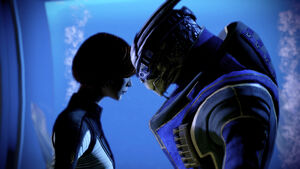 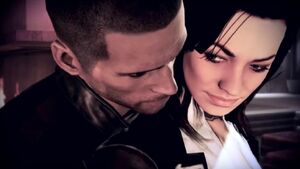 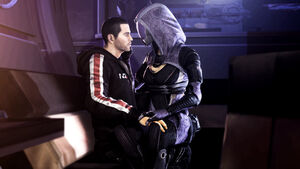 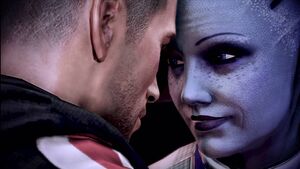 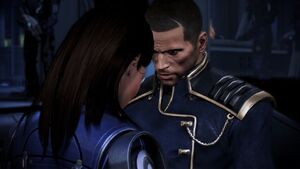 Shepard and Ashley.
Add a photo to this gallery

Retrieved from "https://hero.fandom.com/wiki/Commander_Shepard_(Paragon)?oldid=2328278"
Community content is available under CC-BY-SA unless otherwise noted.