Steel (real name Henry "Hank" Heywood, Sr.), later known as Commander Steel, is a fictional character and superhero in the DC Comics. Joining the military before America's involvement in World War II, Hank would injured by saboteurs who attacked the Marine Corps' base. Heywood was saved by his former professor, Dr. Gilbert Giles, who implanted his body with a cybernetic steel frame. Giving him accelerated healing and superhuman abilities, Heywood took on the moniker of "Steel" and continued to fight against threats. He was later given the title "Commander Steel" when he was commissioned by President Franklin Roosevelt, honoring his heroics. Commander Steel would become a member of the All-Star Squadron, the Justice League, the Justice Society International, and the Shadow Fighters.

He was created by Gerry Conway and the late Don Heck, and first appeared in Steel #1 in March of 1978.

In World War II, Henry Heywood joined the U.S Marine Corps, however he was injured by Saboteurs and spearheaded by a man who would one day be known as Baron Blitzkreig. Heywood was a biology student of Doctor Gilbert Giles, who enhanced his damaged body with mechanic steel devices that gave him superhuman strength, speed, and durability during surgery. Heywood adopted the masked-hero persona "Steel" and embarked on a career fighting war criminals.

Steel entered more directly into World War II as a secret weapon before he joined the All-Star Squadron. Steel was then called a commander by Winston Churchill, the late prime minister of Great Britain. Steel's membership in the Squadron was only for a brief period as Crisis on Infinite Earths caused him to end up in the Post-Crisis Earth where he retired from his superhero career.

Heywood became a wealthy industrialist and put the same mechanical components into his grandson Hank Heywood III and resumed the mantle of Commander Steel after his grandson died in battle. Commander Steel detonated the Sunburst 300 (a device meant to kill Eclipso) as his colleague Nemesis escaped.

Henry "Hank" Heywood was presumably born during the early-to-mid 1900s, and later enlisted into the United States Marine Corps before America got involved with the Second World War. Presumably before he enlisted or after, Hank was a biology student who was mentored by his professor, Dr. Gilbert Giles.

In 1939, Hank was injured when saboteurs attacked a base, which was led by the villain that would be later known as Baron Blitzkrieg. Dr. Giles saved Heywood from death by placing cybernetic steel during his surgery, which gave Hank accelerated healing and superhuman abilities. Heywood then took on the title of "Steel" and fought other saboteurs before becoming a top officer for secret missions in Europe. During the 1940s, Steel saved Major Winston Churchill from being assassinated by a Nazi agent, and was later sent to kidnap Adolf Hitler at a concentration camp in Poland.

Heywood then went on to save Churchill again from another assassination attempt in Canada, and later became an ally of the All-Star Squadron. Becoming a close ally to the team, Hank became a member for a brief period, and was later given the title of "Commander Steel" by President Franklin Roosevelt. After the events of the war, Hank would give his grandson, Hank Heywood III the same steel mainframe, and became a member of the Justice League of America. After his grandson's death, he reassumed the title of Commander Steel and became a member of the Shadow Fighters alongside Creeper, Doctor Midnight, Manhunter, and Peacemaker. Heywood battled Eclipso and died, using the Sunburst 300 while helping Nemesis escape.

On Prime Earth, Heywood joined the United States Army, and was given the cybernetic frame after suffering from life-ending injuries. Heywood became Commander Steel and joined the Justice League, but was killed by Ivo, and his body was destroyed by Despero, an alien conqueror. Heywood was then revived by Black Hand and turned into a Black Lantern, but was restored by the White Lanterns and resurrected. 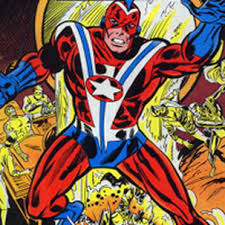