King of the Panther Kingdom

Conker The Squirrel is a red squirrel and the main protagonist of the Conker series. He made his first appearance in the Nintendo 64 game Diddy Kong Racing, where he was one of the main playable characters. He later got his own game on the Game Boy Color known as Conker's Pocket Tales, which was a game geared toward a younger audience. His first 3D adventure was the Nintendo 64 game Conker's Bad Fur Day, followed by its Xbox remake Conker: Live and Reloaded and the discontinued episodic series Conker's Big Reunion. Conker's Bad Fur Day and Conker: Live and Reloaded were different from Conker's Pocket Tales because they had gotten an M rating from the ESRB for Violence, Blood and Gore, Sexual Themes, Alcohol and Drug Reference, and Language.

At the beginning of the game, Conker is sitting on the throne of the Panther King and starts telling the story of how he became king of all the land, which began the day before. Conker is spending time with his pals at the Cock N’ Plucker pub. Using a public phone there, he leaves a message on Berri's answering machine telling her that he’ll be returning a bit late because he wanted to stay with his buddies longer before they leave for some sort of war.

However, after getting royally plastered at a drinking game, Conker decided to leave and drunkenly staggered away from the pub before eventually passing out. He later woke up with a nasty hangover and was unable to do too much of anything until he met an alcoholic scarecrow named Birdy who showed Conker how to sober up.

After this, Conker began his journey home, but it wasn't long before the squirrel started to get increasingly sidetracked over many opportunities to earn money. Conker’s actions also began to have bad consequences when his presence in the area attracted the attention of the Panther King, who desired to use Conker as a table-leg replacement and sent his guards out to apprehend him. The situation started to get worst when Berri was kidnapped from her home and wound up working for mafia boss Don Weaso, who was also under the employ of the Panther King.

Eventually Conker was hired by Don Weaso to work alongside Berri in a bank robbery. However, after entering the bank's vault, it was revealed that the heist was a setup to deliver Conker straight into the Panther King's clutches. Berri attempted to stick up for her boyfriend, only to be gunned down by Don Weaso under the king’s orders. Conker hardly got anytime to grieve until the situation took another sudden turn, when a Xenomorph-like creature named Heinrich bursts from the Panther King’s chest and the bank is launched into orbit by the king’s traitorous Professor.

Conker is then forced to fight Heinrich using a exoskeleton suit and was almost killed before the game suddenly locked up. Conker used this opportunity to blackmail a game programmer into helping him kill Heinrich. The programmer sent the pair to the Panther King’s throne room and after he booted up the game again, Conker slices Heinrich’s head off with a katana.

Despite the squirrel’s victory, Berri was still dead and he couldn't return home since he was forced to become the new king, a job he didn't want to have. Conker ends his tale by saying that the old metaphor involving grass being greener was true and you really don't know what you have until it’s gone.

Conker is back, he was naked, asleep in outdoors, Birdy finds him and tells him that he has to go onto reunion in the Cock and Plucker, since he didn't have money with him he went to find more and discovered that Tediz are still alive, Conker once again defeats them and gets their money, when he gets to the Cock and Plucker he finds out that Tediz are gonna destroy the pub with TNT he drinks some beer and urinates on the burning TNT and stops Tediz and goes to his reunion. However, it turns out that he's the only one who showed up, as all the other characters had their own reunion elsewhere, insisting (via letter) that he shouldn't bother finding them."

Conker is very complex, and he was very different when he debuted. As a young boy, Conker was told by his parents never to drink alcohol, be greedy or swear. He also isn't very bright at times, but he's smart and intelligent. He is very good at helping out friends like Mrs. Queen Bee and Franky the Pitchfork with their problems. He is also very greedy by collecting cash and is very murderous at times.

Conker the Squirrel is an expert with weapons he can use to defeat his opponents. His main weapon is a frying pan in Bad Fur Day and a baseball bat in Live and Reloaded.

Conker is skilled at taming other animals, such as a bull or dinosaur.

One time when Conker was killed, he ended up in a dark realm where Gregg the Grim Reaper dwells, and he gave him numerous lives so that once he died, he could be brought back to life, thus gaining immortality. However he only retains this ability as long as he has Squirrel Tails to exchange. 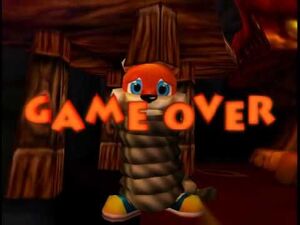 Conker during a Game Over sequence in Conker's Bad Fur Day. 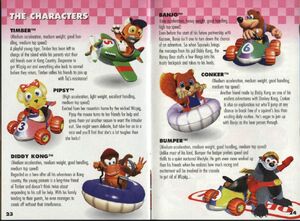 Conker in the instruction manual for Diddy Kong Racing. 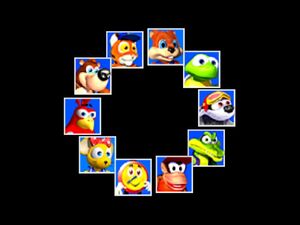 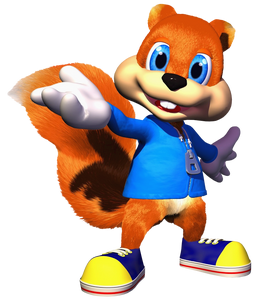 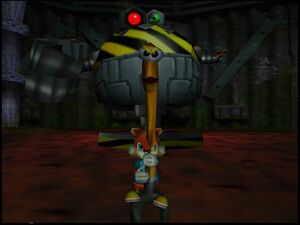 Conker and Franky verses the Haybot. 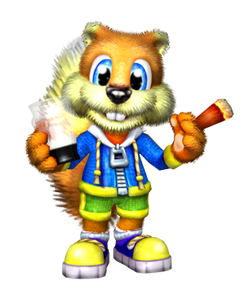 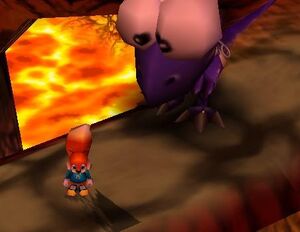 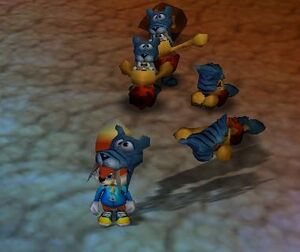 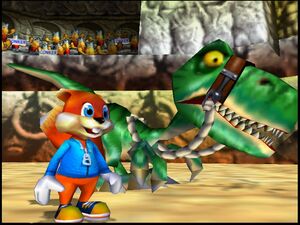 Conker and Fangy the Raptor. 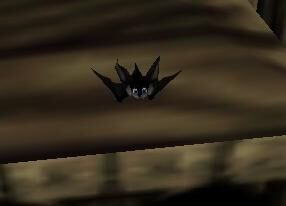 Conker as a vampire bat. 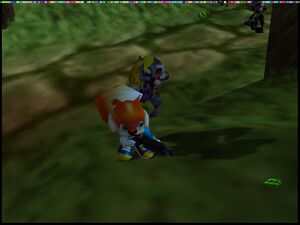 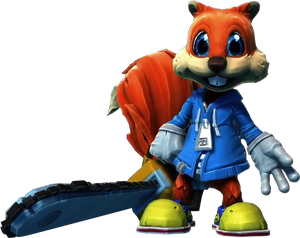 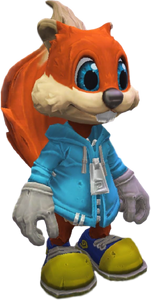 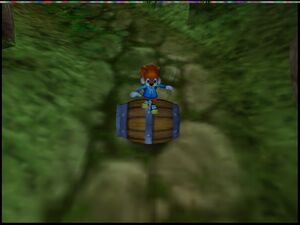 Conker going for a ride on Mr. Barrel. 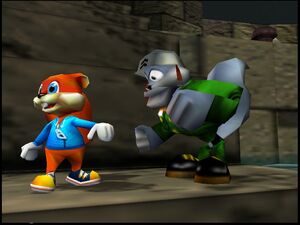 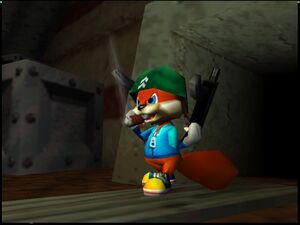 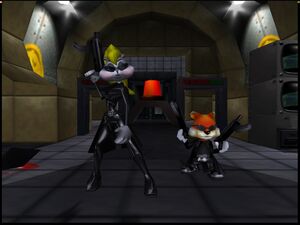 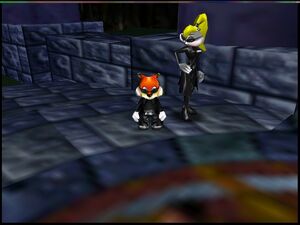 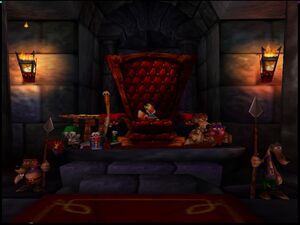 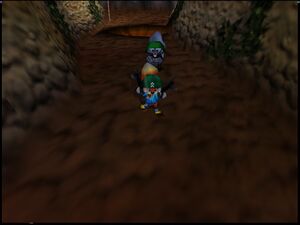 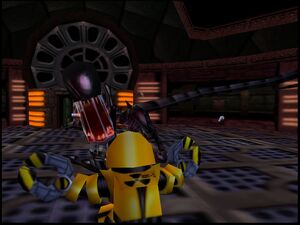 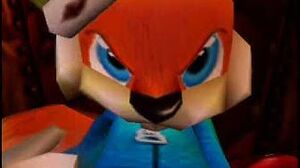