Great teamwork due to strong camaderie

Fooling around with Sasha Braus.

Protect Paradis Island populace from hostile nations. (abandoned)
Keep himself and Eren Yeager alive. (former succeeded, latter abandoned)
Kill the Beast Titan for his massacred village. (abandoned)
Turn his mother back to human. (abandoned, but succeeded later)
Save the world from the Rumbling. (succeeded)

Connie Springer is a major supporting character in the Manga/Anime series, Attack on Titan. He was a member of the 104th Trainee Corps. On graduation, he joined the Survey Corps. He is best friends with Sasha Braus and Jean Kirschtein.

Connie is a very emotional and outgoing boy. Even in the worst scenario, he always tries to get everyone pumped. Connie is keen on battle and doesn't shy away for the chance to fight. However, he is not very bright.

Connie is one of the trainees in Trost District when the Colossal Titan breaks down the gate. He is initially unable to escape due to being low on gas, and so joins Armin Arlert's plan to break into the supply room and replenish their supply. He is one of the best fighters in the group, and so is one of the seven assigned to take down a Titan in the supply room with one strike. While he fails to kill his target with his first blow, he is rescued by Annie Leonhart.

Later on, Connie is part of a group of Scouting Legion members under investigation by Mike Zacharias under suspicion of being an accomplice to Annie. However, when Titans mysteriously appear within Wall Rose, Mike sends them to warn the surrounding villages. Because Connie's home village of Ragako is in the Titans' wake, he receives permission to join to the group headed in that direction. They find the village in ruin. There are no bodies to be seen, nor any evidence they made it out. In the ruins of his house, Connie finds an immobile Titan that reminds him of his mother. As night falls, Connie and his group take refuge in Castle Utgard, which subsequently comes under siege by Titans being led by a mysterious beastlike Titan.

During the siege, he is attacked by a smaller Titan and rescued by Reiner Braun, who is injured in the process. He expresses frustration that Reiner has always protected him, and promises that someday he will repay him. Like the others, he is shocked when Ymir reveals herself to be a Titan—though he quickly nicknames her "Ugly" and gives her a hard time. After the squad lead by Hange Zoe rescues them, Connie joins the efforts to continue investigating Wall Rose for damage. When a battle breaks out between the soldiers and the Armored Titan and Colossal Titan, he is assigned to tend to the wounded. He begs one of the officers to save Reiner and Bertholdt, fearing them missing and injured, and unaware that they are the Titans being fought.

In the aftermath of the battle, Connie joins the rescue party. However, he states he refuses to believe Reiner and Bertholdt Hoover are their enemies, and is determined to hear it from them himself. When the team finally arrives in the forest, he is one of the soldiers that encounters Ymir's Titan form and identifies her for the others. When she fails to respond to questions, he kicks her in the head and again calls her "Ugly". He is shocked when Ymir suddenly attacks, kidnapping Christa and fleeing to rejoin Reiner and Bertholdt.

Eventually, he is finally able to catch up to the traitors and uses his gear to climb onto Reiner's shoulder. Together with Jean Kirschtein, he confronts Bertholdt (and Reiner) concerning the friendship they shared in the past and their lies. He mentions that the members of the 104th Trainees Squad had once promised to survive, and grow old together while reminiscing over drinks. This, along with Jean's words, finally reach Bertholdt and cause him to break down. But before the group can react to Bertholdt's confession of their betrayal, as well as their genuine affection for them, Hannes shouts to warn them that Erwin Smith is leading a massive horde of Titans directly towards them.

Connie's abilities placed him in the top 10 of the graduated trainees. He is said to be "slow on the uptake but makes very sharp turns." Although his combat skills and swordsmanship are average, he is very talented at using the vertical manoeuvring equipment. This makes him one of the fastest soldiers of the Survey Corps, rarely having to engage Titans in combat. He has yet to be seen successfully slaying a Titan. 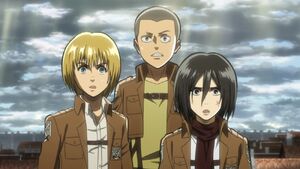 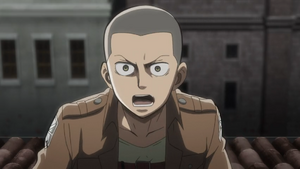 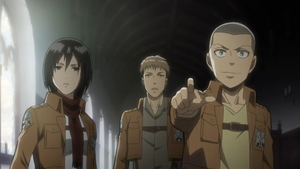 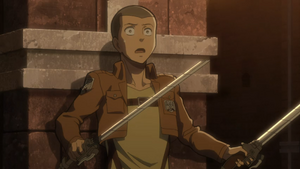 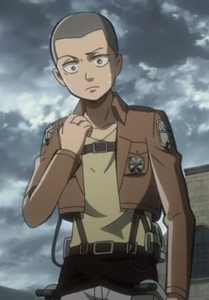 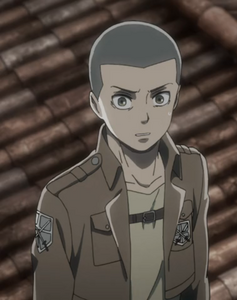 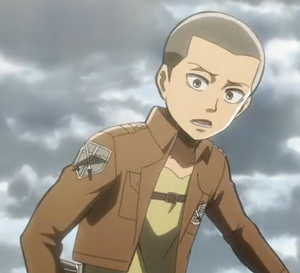 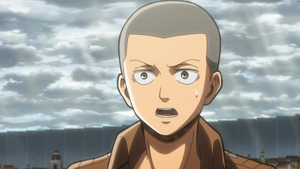 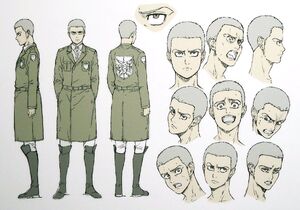 Connie Springer in the upcoming The Final Season. 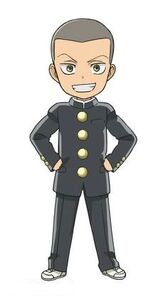 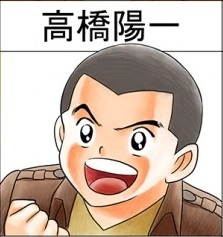