To have fun, later help them defeat Larry Quinn (all succeeded)

The Cat in the Hat

Conrad Walden is one of the two deuteragonists in The Cat in the Hat book, tv special, and film (alongside Sally).

He is played by Spencer Breslin.

In this version, the kids Conrad and Sally are helping their mother, Joan (Kelly Preston), get ready for a party thrown for her office in hopes of impressing her boss, though Conrad is presented to be something of a trouble maker and at odds with Joan. Not helping the familial situation is a sleazy neighbor, Larry Quinn, whose doting on Joan and tries to convince her to send Conrad off to military school while he tries to gain an easy life.

Joan soon sets off for work, leaving the kids with nothing to do until the titular Cat shows up to bring them some fun. But things quickly escalate out of hand, especially when the Cat pull out his crate and tells Conrad never to open it. Naturally Conrad doesn't listen and things go from bad to worse as Larry soon gets involved and Conrad, Sally and the Cat have to fix up the mess before their mother gets home. 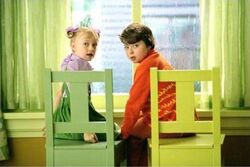 Retrieved from "https://hero.fandom.com/wiki/Conrad_Walden?oldid=2244921"
Community content is available under CC-BY-SA unless otherwise noted.