Member of the Dream Friends

Assist Kirby in his missions.

Sidekick
Coo is a character in the Kirby series, who appears as an ally/friend of Kirby. He is a purple (formerly gray) owl that is best suited for air.

Coo is a owl with a with a white belly and two yellow claws. In Kirby's Dream Land 2 to Kirby 64: The Crystal Shards, he had gray skin. From Kirby: Right Back at Ya! onward, his skin changed to purple.

Coo appears in Super Smash Bros. Ultimate as a advanced-ranked support spirit that increases the user's air defense. His spirit battle is agaisnt Falco and a green Kirby who loves to jump and falls slow on Dream Land with with high winds in effect. 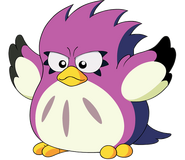 Coo in the anime.