Able to trick the Other Mother and collect the eyes of the Ghost Children.

To do whatever entertains her.

Return to her real world (succeeded).

The Beldam/Other Mother, Other Mr Bobinsky, Other Ms. Spink and Ms. Forcible

Coraline Jones is the main protagonist of Coraline.

She is voiced by Dakota Fanning.

She is a 11-year-old girl who comes with her parents into a new town (somewhere in Oregon in the movie), but she has only complains to make about this change of home. The house needs to be renovated, the sky is always cloudy, the neighbours are old and eccentric (the only kid around is Wybie, who annoys her) and her parents are so busy with the moving and their jobs that Coraline is often alone.

One night, she discovers a secret door in the house, which leads to another world. This place looks exactly like her own, with two differences: everybody has buttons instead of eyes, and overall the apartment is a much better place to live in.

Coraline has lots of fun in the other world, despite the warnings of a mysterious cat (who can talk in the magical world) among other characters.

However, she soon discovers that the Other Mother does not actually love her and wishes to devour her life and trap her soul, she has already done the exact same thing to three other children, and that the Other Father and the other residents of the Other World are in fact her slaves.

Though Coraline manages to escape with Other Wybie's assistance (at the cost of his life). However, she discovers the Other Mother has kidnapped her parents. So, Coraline asks her if she could participate in a scavenger hunt of the Ghost Children as per the black cat's suggestion in order to win the deal.

After realizing that the Other Mother doesn't honor the bargain regardless of whether she wins the game or not, she has the Black Cat help her escape. Once the Other Mother is trapped in the Other World, she then tosses the key down the well. 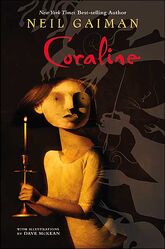 Coraline Jones from the novel's cover.

Corlaine Jones from the Graphic Novel. 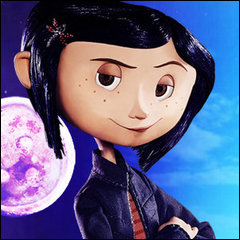 Coraline dreaming of exploring another world 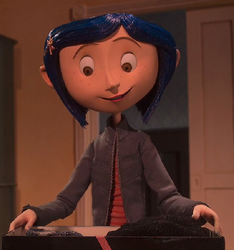 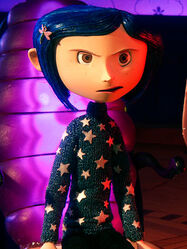 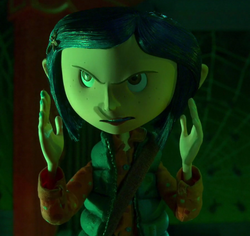 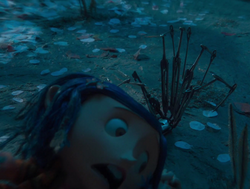 Coraline being dragged to her doom by the Other Mother 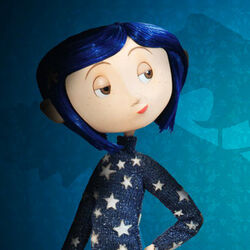 Retrieved from "https://hero.fandom.com/wiki/Coraline_Jones?oldid=1253498"
Community content is available under CC-BY-SA unless otherwise noted.