Much like his brothers, Cord is a muscular man with short brown hair. He wears a headband, dark brown pants, a light brown belt with a strap to carry his axe, and matching boots. In Shadow Dragon and the Blade of Light, Cord's appearance is identical to that of Bord, and only distinguished from Barst by his hair color and dark brown sleeveless shirt. For Mystery of the Emblem, the three brothers were redesigned to look more individual, with Cord gaining a square jaw and mullet.

As a Mirage, Cord looks identical to Bord, both appearing as squat three-fingered knights with a large pauldron on their left shoulders. In comparison to their upper bodies, their legs are disproportionately small. Both Mirages wear square helmets obscuring their faces, with only their glowing blue eyes visible. Above their armor, Mirage Bord and Cord wear brown headbands and matching ponchos with blue, triangular designs.

Like his brothers, Cord is deeply loyal to Ogma due to his strong leadership and compassion for his men. He also cares deeply for Barst and Bord. However, due to Bord and Cord's similar looks, impulsive personalities, and skill with the axe, the two are frequently mistaken for each other. This led to a fierce rivalry between Bord and Cord that manifests through heated arguments and attempts to outdo the other in various competitions.

For many years, both Bord and Cord plied their trade as woodcutters in their homeland of Talys. Eventually, they joined their brother Barst as members of the Talysian Mercenaries, led by Ogma and employed by Talys' King Mostyn. When Gra betrayed Altea to the Dolhr Empire during the War of Shadows, Altea's Prince Marth successfully fled to Talys along with his tactician Malledus and a squad of knights. As Mostyn was close friends with Marth's father, the fallen King Cornelius, he granted them refuge in the island's Eastern fortress, where they lived for two years. This exile ended when pirates who previously conquered Galder Harbor besieged Talys. Mostyn's daughter Caeda, a formidable Pegasus Knight and lover of Marth's, alerted him to retinue to the raid, and the Altean retinue in battle against the brigands. After they successfully routed the enemy, Mostyn advised Marth to finally take arms against Dolhr. Caeda promptly joined Marth in his quest; Mostyn granted her his blessing, but sent Ogma, Barst, Bord, and Cord with her as bodyguards.

Upon reaching the mainland, Cord and his fellow mercenaries assisted Marth's army in counterattacking Galder, freeing the once peaceful port town from Gomer's tyranny. As Marth began his mission to free Archanea from the clutches of Dolhr, Cord assisted Ogma with protecting him every step of the way, and grew to appreciate Marth and Caeda's shared bond. Eventually, Marth's army stormed Dolhr itself, where Marth slew its emperor, the Earth Dragon Medeus, ending the War of Shadows. Barst, weary of war's bloodshed and chaos, retired from the Talysian Mercenaries on good terms with Ogma and his brothers, but hoped that Bord and Cord would remember more peaceful ways of living. Bord and Cord returned to Mostyn's side with Ogma, while Caeda accepted Marth's marriage proposal. While most of Talys rejoiced at the two's engagement, local clans seized the opportunity to revolt, and when Caeda arrived in her homeland to visit her father, she and her bodyguard Norne were caught in the fighting. Ogma, Bord and Cord immediately mobilized to rescue them, but midway through the battle were ambushed by Navarre, who allied with the clans to settle a score with Ogma. The two prepared to duel, but Caeda and Norne fought their way through the fray, and the former persuaded him to fight with her instead. Soon after the clans were subdued. When all hostile fighters were routed, Caeda tearfully expressed her goodbyes to Ogma, and left to visit Mostyn. Soon after, both Bord and Cord took Barst's words about living a peaceful life to heart and retired from the mercenary life themselves to resume woodcutting.

One year after the War of Shadows, Bord and Cord received word that Prince Marth was directed by the first Emperor of the newly constructed Holy Empire of Archanea, his old friend Hardin, to suppress an uprising in the Archanean-occupied country of Grust. Concerned about the safety of Caeda's fiancé, the two brothers decided to fight by Marth's side once again. Upon reaching the Archanean continent, they learned that Grust's rebellion had ended with the death of it's instigator, General Lorenz. They also learned that Grust's occupying leader General Lang ordered Marth to stop a coup occurring in Macedon. Bord and Cord both traveled to Macedon, intending to intercept Marth as his army journeyed to the Macedon Aerie. However, both split up as their rivalry reached a boiling point, with Cord taking residence in a Macedonian village farther away from the Aerie. When Marth's army reached that village, Cord eagerly pledged himself to their cause. At the Aerie, both Bord and Cord assisted Marth in killing the usurper Lykke.

With the Macedonian coup thwarted, Lang instructed Marth to retrieve the royal children Jubelo and Yuliya, who he imprisoned after Lorenz's death, but were freed by Ogma. Marth, who by this point was disgusted with Lang's cruelty and insolence, refused to follow any more of the general's orders. Lang declared Marth's defiance an act of war, but fled when challenged by his advisor Jagen. Bord and Cord helped search for their old captain and Grust's heirs, finding the three surrounded by bandits. The two helped fend off the bandits, but Marth was interrupted by the arrival of Caeda, who was one of the few people that managed to escape a surprise attack on Altea led by the Archanean Empire and a corrupted Hardin. Deciding to liberate the Grustian people, Marth's army marched on Lang's stronghold, Ostern Keep. Along the way, Cord potentially encountered Barst, who ultimately settled down as a woodcutter in Grust after stints in the Archanean army and as a pirate. Cord requested Barst's help in Marth's army and warned his brother that he would be a disgrace to the Talysian Mercenaries for refusing, convincing Barst to join. After assisting Marth with Lang's defeat, Cord followed Marth through the rest of the War of Heroes, which concluded when Marth slew a resurrected Medeus. Together, Bord and Cord returned to Talys and resumed woodcutting. Unlike his brother, Cord permanently retired from active combat, much preferring the quiet life of chopping wood.

Mirage Bord and Cord were golems constructed by Mirage Tharja to help train her Mirage Master, Kiria Kurono, in looking sufficiently cute for a duet with fellow Mirage Master Tsubasa Oribe. However, the two malfunction and attack the Mirage Masters present. Though he was initially invincible, Mirage Cord harbored an attraction for coolheaded yet attractive girls such as Kiria. With a series of seductive poses, Kiria sufficiently weakened Mirage Bord enough for the Mirage Masters to destroy him.

An unnamed Cord appears briefly in the first episode of the Fire Emblem OVA, which adapts the first three chapters and some backstory of Mystery of the Emblem. Along with Barst and Bord, Cord followed Ogma and helped him rescued Marth and Caeda from Gazzak as the Galder Pirates raided Talys. Gazzak attempted to retreat, but the three brothers cornered him, allowing Ogma to slay him once and for all.

Official artwork of Barst, Bord and Cord from Fire Emblem: Shadow Dragon and the Blade of Light.

Cord's portrait in Fire Emblem: New Mystery of the Emblem. 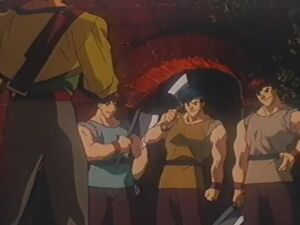 Combined artwork of Barst, Bord and Cord for Fire Emblem 0 trading cards of all three characters.

Cord's portrait in Fire Emblem: Mystery of the Emblem.
Add a photo to this gallery

Retrieved from "https://hero.fandom.com/wiki/Cord?oldid=2191160"
Community content is available under CC-BY-SA unless otherwise noted.