Corey Anders is a high school student who found the bottle of Jeannie and became her master in the 1970's animated series, Jeannie, the cartoon version of the 1960's sitcom, I Dream Of Jeannie. Corey is the cartoon equivalent of the original Jeannie's love interest and eventual husband, Major Anthony Nelson. He was voiced by then-unknown actor Mark Hamill, who would go on to live-action as Luke Skywalker and voice work as the 1990's animated Joker.

Like Tony Nelson, and decidedly unlike the targets of many later 'magical girlfriends', Corey was athletic and almost a stereotypical Hanna-Barbera strong male teen, his hair dark to dark brown.

Unlike Tony Nelson, Corey is not above using Jeannie's powers for a benefit, or attempted benefit, considering how often even the most careful wishes go awry for them. He is also a good deal more openly attracted to Jeannie, though she still seems more into him than he for her. He is no bully and will stand up for all his friends, even when they annoy him, When annoyed, his voice takes on that classic Mark Hamill tone, almost unmistakable in his other more famous roles. Just like his best friend Henry who is similar Shaggy Rogers, Corey is also similar to Fred Jones in the series.

Corey found Jeannie's bottle and opened it when he wiped out while surfing. Unlike Tony Nelson, he does not seem to have freed Jeannie, though the effect is all the same, since her direct compliance to his wishes as far from 100 %. His adventures and misadventures are a mix of his own foibles, Jeannie's fumbling efforts to get him to notice her, Babu's mishaps and best friend Henry's wishes on either genie.

He accompanied the gang on an adventure in ancient Persia. For some reason, everyone knew each other, despite the lengths the Jeannie bunch went to on their own show to keep Jeannie and Babu a secret. 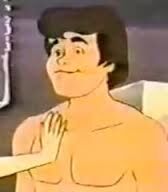