Cornelia (Planet of the Apes)

Spend her time with Caesar and her sons

Cornelia was an altered chimpanzee, the wife of Caesar, the mother of Blue Eyes and Cornelius and queen of the ape colony.

She was a fellow inmate of Rocket, Maurice and Buck at the San Bruno Primate Shelter. She met Caesar during his stay at the shelter and formed a romantic bond with him. After Caesar's rise to power, she became his wife and bore him two sons, Blue Eyes and Cornelius. Because she was the queen of the ape colony, she was the matriarch of the the Royal Ape Family. When humans are rediscovered, Cornelia becomes the ape counterpart of Ellie.

She is portrayed by Judy Greer.

Cornelia was born in the wild before being captured and taken to the San Bruno Primate Shelter.

Cornelia was one of the apes being held at the San Bruno Primate Shelter along with Maurice, Rocket, Buck and Caesar. She is first seen when Dodge Landon gave his friends a tour of the facility, one of his female friends commented that Cornelia was cute and mistook her as male. Dodge corrected her saying she was female and that her name was Cornelia.

Later, Cornelia was tranquillized and is shipped to Gen-Sys Laboratories to be used as a test subject, only to be freed later when Caesar and the other apes raided the place while freeing the other captured apes.

Though not shown on screen, Cornelia took part in the Battle on the Golden Gate Bridge and was probably in the forest when Caesar said his final farewell to Will.

Dawn of the Planet of the Apes: Firestorm

Cornelia was seen treating the injured apes after the battle on the Golden Gate Bridge and was seen to be uninjured in the fight. Upon seeing Caesar she went to him, lowering her head and extending her hand somewhat reluctantly. Caesar ordered her to follow Maurice to safety. Agitated and defiant, she told him that when the injured apes moved they hurt more and that they required rest. Caesar shook his head, telling her that if they stayed put they'd be slaughtered. Cornelia attempted to stand her ground but Caesar threatened her prompting her to stand down to help the injured to their feet.

Later as the apes were getting hungry, Cornelia revealed to Caesar and Maurice that she was born in the wild and that the food in the forest is very different to that in the jungle in which she grew up. Caesar dismissed her comments despite Maurice attempting to talk him around. Caesar admitted, however, that he admired Cornelia for her willingness to help.

Later, she found Caesar sitting alone in a tree. They talked as Cornelia groomed and she praised him for his efforts to keep the apes safe. Caesar who was expecting her to complain about something he was doing wrong, was surprised at her praise.

When the humans attacked the forest with fire, Cornelia was almost killed. Caesar pushed her into the river until the humans and the fire were gone. Later, Cornelia found Caesar sitting in a tree again and groomed him as they watched the lights in the city go out.

After ten years of living in the Muir Woods Park, Cornelia has happily married Caesar becoming queen of the now growing Ape Colony and it is through her love and support that he is able to lead the other apes. In the time before the Ape Village's creation she and Caesar were given a young son Blue Eyes (named for his blue iris') who became the prince and couple's treasured heir. Sometime later she and Caesar learned that, they were expecting another child in the near future.

Upon Caesar and Blue Eyes returning to the village after their hunting trip, she has her midwives summoned Caesar before she delivers and with her husband by her side she gives birth to a second son. Caesar sat with her and held her hand as they bonded over their new child when Blue Eyes entered just moments later. After telling their oldest son to come meet his new brother, the three bonded over the new addition to their now expanded family.

Later, as Caesar was settling down for the night, he saw that she didn't appear to be well and asked if she was okay. She replied that she was and that she just needed rest. Her health took a turn for the worse while her family was at the dam with the humans. When they returned, she had one of her midwives summon them and they hurried to her side to see that she hadn't got long to live. A moment later, Malcolm and Ellie entered to apologize for Carver's earlier behavior and saw what was going on. They pleaded to Caesar to allow Ellie to help but Caesar, forever stubborn, reflected on what happened at the dam, telling them he didn't trust them. The humans continued to plead with him, prompting Caesar to turn to his sick wife. He dismissed Malcolm but allowed Ellie to stay telling her that one day, they would live together in peace. Ellie then proceeded to heal her.

A few days later, when the power to the city had been restored, Cornelia, now well enough, joined the celebrations with the humans, much to the astonishment of Blue Eyes who was the first to embrace her. She then embraced Caesar but moments later, Caesar was shot by a hidden Koba. Cornelia cried out as her husband fell off the ledge, presumably to his death. Blue Eyes held her as she grieved. She was then sent with the other females and young to the forest by Koba who, unknowingly to everyone else, had shot Caesar and framed the humans for the crime.

On the way to the Rodman House, Caesar asked Ellie about the safety of his family, and she told him she didn't know. A few hours later, Malcolm returned to the house with medical supplies and Blue Eyes, who he had found in the apartment. A recovering Caesar asked his son about his mother and brother, and Blue Eyes told him that they were safe for the time being.

A few days later, Blue Eyes returned to his father having rescued Maurice, Rocket, Luca and others from Koba and told his father that Koba was going to move the females and young from their safe haven in the woods. Caesar, sensing that his wife and youngest son were now in danger, told Blue Eyes and the others that they had to act now if they wanted Cornelia safe.

After Koba's defeat and death, Cornelia and the baby were reunited with Caesar and Blue Eyes, relieved to see that they were alive and safe. She then stands with her family as the other apes bow down to Caesar awaiting his guidance for the fighting to come.

War for the Planet of the Apes: Revelations

In Revelations, Cornelia is seen protecting her youngest son, Cornelius during the early stages of the human/ape conflict. After a missile shot by the humans destroys a nearby building, Caesar orders Cornelia and the other women to find shelter within the forest. Later, turncoat apes attempt to separate Cornelia from the rest of the women as she is their leader and they plan to overthrow Caesar. She outsmarts them and gets away. She meets up with Tinker and a few other apes later and they talk about their time in the primate shelter and their future before Cornelia returns to the other women, where she defiantly refuses to go along with Grey as she is assisting another young ape during birth. After a small fight, Ceder, the wife of Grey asks Cornelia for forgiveness after taking her crown and declaring herself queen.

Cornelia is showing hugging Blue Eyes when he returns from his long journey and is at Caesar's side during the Ape Council meeting. She along with Blue Eyes, is murdered by the Colonel in the first act of the film.

She is also mentioned by Caesar two times later after her death, first when Caesar is asking Winter about his betrayal, then finally when Caesar confronts the Colonel himself. 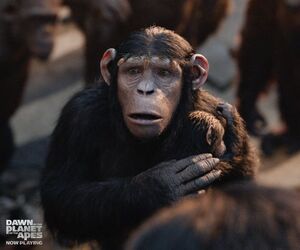