Prince/Princess of Nohr/Hoshido
King/Queen of Valla

Like all other Nohrian and Hoshidan royalty, Corrin possesses the power of the First Dragons called Dragon Vein, being able to alter the terrain around oneself.

Corrin was actually born from Valla and the eldest child of Anankos the Silent Dragon and Mikoto and the elder sibling of Lilith. a step-child of the deceased king of Hoshido Sumeragi after he remarried to Corrin's mother, Mikoto. the nibling of Arete, the step-sibling of Ryoma, Hinoka, Takumi and Sakura, the adoptive child of Garon and the adoptive sibling of Xander, Camilla, Leo, and Elise. He/She also has Felicia, Flora, Jakob, and Gunter as his/her personal retainers.

The Avatar is a kind person who cares deeply for the people they love and will come to the aid of anyone who should ask them for it, rapid-firing apologies if they do something to upset others, likely inherited this habit from their father. Despite having been sheltered throughout all of their childhood, they are quite social and conversational, as well as persuasive to the point of convincing some enemy soldiers to join their cause. Aside from being unusually charismatic and attracting people to them, the Avatar is also mentioned to have a way with animals, as it is said the horses in the stables like them. As they spent the majority of their time growing up within the walls of Northern Fortress, the Avatar is very curious about the outside world and quite eager to come across new sights. As proven by their support conversations with Silas, however, this trait of theirs has somewhat diminished over time.

As noted by many characters throughout the series, the Avatar is quick to trust individuals including Zola in Birthright and Anthony in Revelation, both of which were tasked with killing them by Garon and Anankos respectively, and the shady situations about them. However, both Ryoma and Xander have stated that this trusting nature is what makes the Avatar so trustworthy themselves, and why so many people place their faith in them. According to Ryoma in Revelation, even when they were young, the Avatar displayed an honest and kind mindset, which he described as the traits of a ruler. However, Xander states in Revelation that their naive persona is also their greatest weakness due to the possibility of being manipulated or lured into grave danger, but if not for this trait he nor anyone else would be able to follow them on this path.

While their charisma makes them an excellent leader in skirmishes and the male Avatar's support with Shiro show he's good at discerning an immediate opponent's strengths and weaknesses, both genders lack the vision to handle large-scale battles. Their supports with Leo showcase the Avatar being upset at their inability to command large forces while Leo is upset as his inability to command small ones.

The Avatar has shown strong familial attachments to both the Nohrian and Hoshidan royal siblings, as they are reluctant to fight against either one in their respective routes. When Takumi in Conquest and Leo in Birthright try to kill the Avatar under the pretext of them being a traitor to their home nations, the Avatar always tries to stop them from fighting and spares their lives if possible. Even in Revelation, where the Avatar refuses to side with either country, they cannot bear to see their families go to war with one another. They also form a close relationship with Azura regardless of route, due to their similar backgrounds and because the Avatar can be open with her about their feelings regarding obeying Garon (in Conquest) and knowing about Valla (in Revelation).

The Avatar has shown a wide variety of talents. Kaze's Private Quarter invite quote reveals that they are a great piano player. Some supports notes that they enjoy writing poetry and reading about philosophy. However, they have trouble cooking as they manage to burn tea in their support with Jakob and barely manages to bake palatable cookies with Dwyer.

Their personality varies slightly by gender; the male is more laid-back and sweet, while the female is peppier and more teasing.

The Avatar is also shown to be a very loving and protective parent, shown when they achieve an S-Support with an opposite-sex character. When Kana is attacked by Invaders, they display nothing but righteous fury, stating that they will stain the fields of the Deeprealm with the Invaders' blood in retaliation for trying to harm Kana.

As a result of Mikoto's murder, they display aggression towards Nohr, though they dislike the idea of having to fight their former Nohrian siblings. As many unavoidable deaths occur during this route, the Avatar grows increasingly hostile towards King Garon, Hans, and Iago for their disregard for human lives. However, they do their best to minimize casualties on the Nohrian front, only killing when necessary as they spared Zola simply because it is what Mikoto would have done and kept him alive due to the usefulness they could have from him in their onslaught of Nohr.

The Avatar is unwilling to take the lives of Hoshidans, even displaying regret in choosing their Nohrian siblings over their blood family, even though they don't agree with Garon's ways. As the route progresses, they are forced to watch as many atrocities occur to the innocent Hoshidans while they are unable to save them, lest they receive Garon's wrath. This results in them trying to change Nohr and to end the war as quickly as possible. They also refrain from taking the lives of Hoshidans as much as possible, resolving to end the war in their own way, a trait that earns Kaze's loyalty. In their supports with Azura in Conquest, the Avatar also suffers from nightmares from having killed Hoshidans when they have presented no choice in the matter.

Needing a way to draw their attention, the Avatar, Azura, and Felicia/Jakob decide to take down to frontline commanders of both armies and succeeds. Unfortunately, both Xander and Ryoma see this as an act of treason and brands the Avatar and Azura as traitors. With both armies after them, Azura takes them to the Bottomless Canyon and tells them to jump with her into it. After jumping in, they land in an unknown land that Azura introduces as Valla, a mysterious third kingdom that has been orchestrating the war between Nohr and Hoshido following its takeover by Anankos. To ensure that no one can know of this, a curse was placed so that anyone who discusses Valla outside of the kingdom will be killed. With the true villain of the war now made aware to the Avatar, they decide to return to the surface in hopes of combining the Nohrian and Hoshido armies in order to combat this threat.

After a series of battles, the Avatar manages to convince both the Hoshido and Nohr armies into joining their cause. The Hoshidans join them after seeing their honest personality and the Nohrians joining after King Garon becomes unstable and a threat to the kingdom itself. With the Avatar as the uniter of the armies, they lead the army into the Bottomless Canyon where, during the descent, Scarlet is killed by an unknown assailant. After a skirmish, though the Avatar has to break the news of Scarlet's death, the Avatar and Azura are now able to properly explain the true villain to both armies, the King of Valla, Anankos.

On the way to confront Anankos, the Avatar faces several of his resurrected soldiers, including Scarlet, Azura's mother Arete, Mikoto, and Sumeragi. Before Mikoto disappears following her defeat, she reveals that she was born in Valla, that Arete is her sister, and that the Avatar is Vallite royalty. The Avatar is shocked, but they strengthen their resolve to defeat Anankos.

Once the army reaches the Vallite throne room, it is revealed that Gunter is Scarlet's killer and that he was possessed by Anankos for the entire campaign. After Gunter is defeated and freed of Anankos's influence, Anankos himself appears to fight the army. The Avatar's sword is upgraded into the Omega Yato through their brothers' legendary weapons and, following long battle against the degenerated dragon, Anankos is slain and peace is restored to the world. Hoshido, now led by Ryona, and Nohr, now lead by Xander, make a pact of peace between the previously feuding kingdoms. Azura decides to relinquish the throne to the Avatar, stating that it was there because of their efforts and leadership that Anankos was slain. In addition, both Ryoma and Xander cede some of their lands to Valla to help form the new kingdom.

The Avatar never learns that Anankos is their birth father, nor do they learn that Lilith is their 'sister' due to separate vows of secrecy that Lilith and Mikoto made with Anankos's heart. Template:SpoilerEnd

The Avatar, under their default name Corrin (Kamui in the Japanese version), as well as their default Nohr Prince/Princess class appearances in Fates, is a DLC newcomer character in Super Smash Bros. for Nintendo 3DS and Wii U. Nobunaga Shimazaki and Cam Clarke reprise their roles as the male Corrin and Satomi Sato and Marcella Lentz-Pope reprise their roles as the female Avatar. They were released on February 3, 2016.

Corrin's main weapon is their signature sword, the Yato, in its Omega form. Corrin's unique trait revolves around their ability to shift parts of their bodies into their dragon forms as a reference to the attack animations of the Dragon Fang skill. Several of their standard moves are also references to various attacks in the Nohr Prince/Princess class such as their animation for Luna being their dash attack. For some of their smash attacks and their side special, they transform their arms into spear-like appendages, dealing extra damage if they strike an opponent with the tip of the spear. Their forward smash is unique as they can deal damage to opponents directly in front of them as they charge it since they hold the Yato blade slightly in front of them, allowing the rotating blades to strike an enemy.

Corrin needs to be defeated to awakened and unlocked. 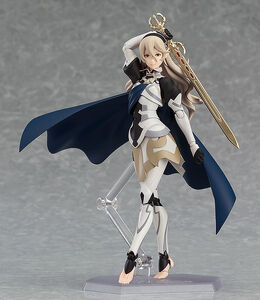 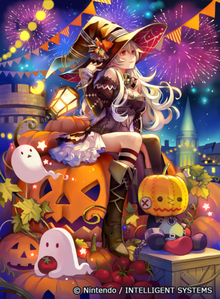 Corrin as a Nohrian Witch

Female Corrin as she appears in Super Smash Bros. Ultimate. 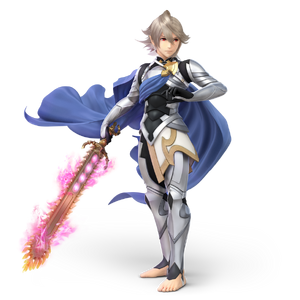 Male Corrin as he appears in Super Smash Bros. Ultimate. 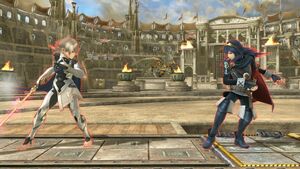 Corrin along with Lucina. 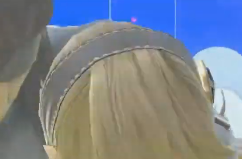 Corrin Headband
Add a photo to this gallery

Retrieved from "https://hero.fandom.com/wiki/Corrin?oldid=1868340"
Community content is available under CC-BY-SA unless otherwise noted.