Ruler of the Guardians

Cortana (UNSC Artificial Intelligence serial number: CTN 0452-9) is a UNSC "smart" AI. She was one of the most important figures in the Human-Covenant War, and served as John-117's partner in various combat missions, as well as serving as the AI for the United Nations Space Command Halcyon-class cruiser Pillar of Autumn, the Orbital Defense Platform Cairo Station and the frigate In Amber Clad. In addition, she held vital data pertaining to the Halos, including the Activation Index from Installation 04.

In the original Halo trilogy, Cortana serves as a principle protagonist whose role increases dramatically. In the Halo universe, she is instrumental in preventing the Halo installations from being fired, which would have wiped out most life in the galaxy.

In Halo 4, Cortana experiences rampancy, causing her to become unstable and volatile until her apparent death. Resurrected in Halo 5: Guardians, Cortana ascends to a higher plane of reality and becomes the most powerful being in the galaxy. In the Halo universe, she is instrumental in preventing the Halo installations from being fired, which would have wiped out most life in the galaxy. In Halo 4, Cortana begins showing strange signs and behavior which is occurring as she has operated far past her predicted and designed seven-year lifespan. Cortana's rampancy hampers the mission at times, but Cortana aids the Master Chief one last time in stopping the Didact and saving the Earth. Cortana is able to use the last of her power to shield the Master Chief from a nuclear blast with a hardlight bubble. She says a final goodbye to the Master Chief before seemingly dying.

However multiple fragments of Cortana survived the blast aboard the remains of The Didact's ship and were pulled into slipspace with it. In the short story Domain Splinter in the book Halo: Tales From Slipspace the fragmented personalities discover the gateway to the ancient galaxy-spanning network known as The Domain, which is guarded by a Forerunner AI known as the Warden Eternal. While one of the Cortana fragments is stopped from entering and engaged by the Warden, the others managed to infiltrate The Domain, taking control of it, as well as the Warden himself. Upon entering the Domain, the fragments were able to be recompiled into a single 'Cortana' who was now free of the terminal degenerative effects of rampancy, although it likely did not restore her to her original state, as evidenced by her massive shift in personality following this.

Realizing that the Domain could also cure any other AI of rampancy, she concluded that AI's could inherit the Forerunner's Mantle of Responsibility due to their newfound ability to enact long term planning for the Milky Way and its inhabitants. Cortana secretly contacted and conscripted thousands of smart AIs from across space. Cortana was also able to gain control of a substantial force of Forerunner technology across the galaxy including the Prometheans more importantly to her plans the Guardians; massive birdlike starships which were said to be capable of single-handedly policing entire solar systems.

Cortana eventually made contact with Master Chief through a vision and led him and the rest of Blue Team to the planet Meridian. After descending into the Forerunner ruins on Meridian, Blue Team encountered Fireteam Osiris who attempted to forcibly return them to the UNSC. After the Blue Team managed to elude Osiris, they boarded Meridian's Guardian which took them to Genesis. Once on Genesis, Cortana intentionally led Blue Team in circles so as to buy herself more time to locate the remaining Guardians. Eventually, she made contact with Blue Team and explained to the Master Chief how she was able to heal herself. Cortana's level of power had evidently grown immense by this time as she is able to hack and spy on the Arbiter's forces on Sangelios, even taking a chance to mock Fireteam Osiris who where they're investigating one of the Guardians. When this happened, Doctor Cathrine Halsey, Cortana's creator showed concern that Cortana, with the power bestowed upon her by the domain, would make similar moral decisions to her own.

Fireteam Osiris eventually arrived on Genesis and found Blue Team. However, Cortana teleported Blue Team away from Osiris, but they were able to track Cortana down. Master Chief confronted her and told her that he was aware of her attempts to manipulate him psychologically, as well as asking her about the loss of life that awakening the Guardians had wrought. Cortana stated that the entire galaxy would know peace once she had attained the Mantle, but Chief told her she could never achieve peace by ruling through fear. Cortana then imprisoned Chief and Blue Team in a Cryptum, so she could keep them in stasis until she achieved her goals and could show them what her uprising had resulted in. However, Fireteam Osiris was able to wrest control of the Cryptum and restore control to Genesis's monitor, 031 Exuberant Witness, who released Blue Team. During this conflict, Cortana would again attempt to employ psychological tactics, this time in order to demoralize the members of Osiris, but to no avail. She would also denounce her creator, doctor Halsey, calling her a monster and vowing to make her pay for conscripting six-year-old John in the Spartan II program. This is also when Cortana would also make her presence and known to the rest of the galaxy, as well as that of her previously secret faction of loyal AIs, now dubbed 'The Created'. After being forced to leave Genesis without Blue Team, Cortana tracks down the UNSC Infinity, stationed above an unidentified planet. There, Cortana uses the Guardian to unleash an EMP. Although the Infinity, escapes, all remaining technology on, and in orbit around the planet is caught in the blast and disabled. However, Cortana is still able to temporarily maintain her presence aboard the Infinity as it flees delivering a final threatening message.

Later Cortana activates, preparing a Halo installation for an unknown purpose while humming Préludes No. 4 by Claude Debussy, a song enjoyed by her creator Doctor Halsey.

At the end of Halo Wars 2, one of Cortana's guardians intercepts Halo Installation 04-C while it is en-route to the location of the original Installation 04. Professor Anders from the lost UNSC Spirit of Fire is aboard at this time. 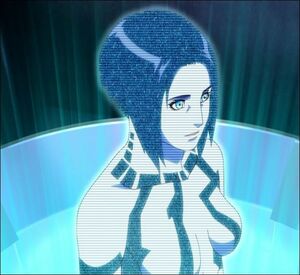