Fighting
Protecting the United Planets and galaxy from threats

Protect the United Planets and galaxy

Cosmic Boy (real name Rokk Krinn) is a native of Braal with the ability to control electromagnetic fields. He is one of the three founding members of the Legion of Super-Heroes.

He was created by the late Otto Binder, and the late Al Plastino.

The Legion of Super-Heroes has undergone major alterations to its history as a result of time-bending galactic crises, but one constant is the role of Cosmic Boy as a sensible, steady presence and the Legion's natural leader. Cosmic Boy, with Saturn Girl and Lightning Lad, formed the Legion's heart. In the current Legion's continuity, Rokk Krinn is a native of Braal who possesses his people innate ability to wield magnetic forces. In a United Planets that mistrusts its youth, Rokk Krinn donned a costume as Cosmic Boy and rallied other Legionnaires to join their teenage rebellion against oppression, using the superheroes of a thousand years before as inspiration.

During his tenure as Legion leader, Cosmic Boy fought Terror Firma, held off the threat of a competing team, the Wanderers, and beat back a superpowered Dominator invasion of Earth. Cosmic Boy led the counter attack that appeared to have destroyed the Dominator homeworld. While the planet had, in fact, merely been transported to the Phantom Zone, Cosmic Boy took the public blame and dropped from sight. Supergirl became Legion leader in his absence, followed by Lightning Lad.

Cosmic Boy was one of three Legionnaires who traveled to the 20th century to stop Brainiac from altering time in the episode "New Kids in Town." He appeared to be the leader yet again and was voiced by Chad Lowe.

Following the same continuity as the Superman cartoon, Cos was still a Legionnaire but had been possessed by the Emerald Eye alongside much of his team in the episode Far From Home. He was later freed and welcomed Supergirl into their ranks. He had no speaking lines.

Superman & The Legion of Super-Heroes

Cosmic Boy was a frequent supporting character in the two seasons of the Legion cartoon. Only name-dropped in the first episode, he made a cameo in the second before making regular speaking appearances at the end of the first season, starting with "Chain of Command." This Cosmic Boy was a Legion founder and the first leader of the team as well. He was overprotective of Saturn Girl, which caused he and Lightning Lad to clash. When a re-election was called, Cos expected to win again but was a good sport when the title randomly went to Bouncing Boy. He was one of many Legionnaires who assembled the Fatal Five and stood against the Sun-Eater in Sundown.

During the second season, two years had passed and Cos is once again leader. He was injured in battle against the Legion of Super-Villains in "Man From the Edge of Tomorrow" but quickly recovered. He led a hunt against Timber Wolf in "Cry Wolf" when Wolf was suspected of violating Legion code. He protested Karate Kid's membership and fought Grimbor in "Karate Kid" and joined with his fellow founders in saving R.J. Brande in "In the Beginning." He rallied the Legionnaires and made a stand against Khund cyborgs and Brainiac with the team in "Dark Victory." Throughout the two seasons of the show, he was voiced by Wil Wheaton.

Cosmic Boy appeared in the live-action Smallville television show, portrayed by Ryan Kennedy. Alongside the other founding Legionnaires, they traveled to 21st century Smallville to stop Brainiac in the episode "Legion." The Legionnaires had planned to kill Brainiac's host, Chloe, but Clark taught them the value of never going down that road.

When they are able to capture Brainiac without killing, Cosmic Boy resolved that the Legion would take up a code against killing. Cosmic Boy later returned to Smallville in the episode "Doomsday" to warn Clark against confronting Doomsday, as history showed Clark will be killed by him. He gave Clark a special flight ring and encouraged him to send Doomsday to the 31st century, where the Legion was in full force and waiting for him. 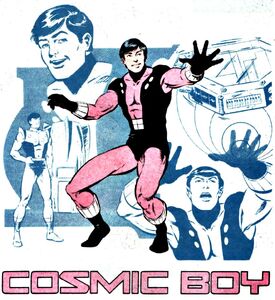 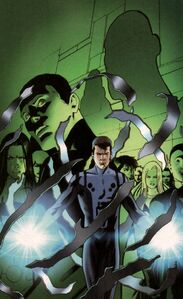 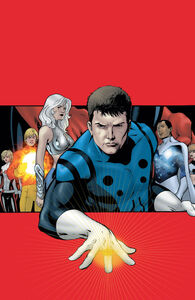 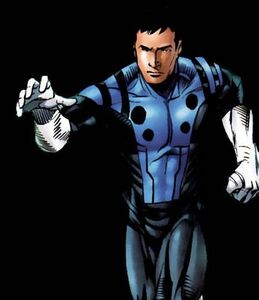 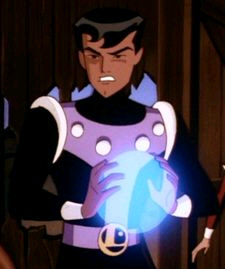 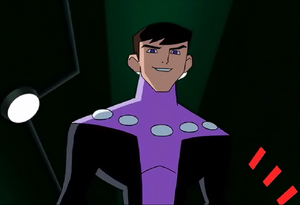 Cosmic Boy in Legion of Superheroes 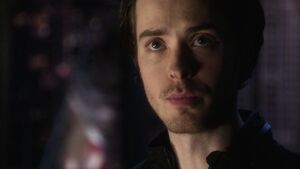 Cosmic Boy in Smallville
Add a photo to this gallery

Retrieved from "https://hero.fandom.com/wiki/Cosmic_Boy?oldid=1913627"
Community content is available under CC-BY-SA unless otherwise noted.