Pessimistic Alien
Cosmo the Seedrian is the tritagonist of the third season of the anime series Sonic X.

Cosmo is a female child of a plant-like alien species whose homeworld was destroyed by the villainous Metarex. In the years that followed, left Cosmo as the sole survivor of her kind. To thwart the Metarex's ambitions for universal dominance, Cosmo joined Sonic the Hedgehog and his allies in their war against the Metarex, eventually becoming a love interest for Miles "Tails" Prower. In the end however, she sacrificed herself to defeat the Metarex for good.

She's an ally of Sonic the Hedgehog and his friends. It's widely accepted that her primary purpose in the series is that she has a love interest for Tails, the two characters being the same age and displaying an overt fondness for one another.

Cosmo is a kind and gentle character though she often feels guilt, because she was unable to save anyone from her home planet ever since the destruction of the Metarex.

She also seems to suffer from a low self-esteem issue, often calling herself "unworthy" or blaming herself for the hardships that she and her friends had to endure.

Cosmo also dislikes violence, but acknowledges that fighting is sometimes a necessity, although she herself is unable to fight. Cosmo can be somewhat clumsy, but she is also quite resourceful. She also has a penchant of getting into trouble.

Cosmo's former home world was destroyed by the Metarex before she was born, and she was instead raised on a space colony. She lived peacefully there until the Metarex came and began to destroy her new home, including her family (including her mother, Earthia). As Cosmo was escaping, the Metarex planted a tracking device on her. Cosmo also had a device inside her brain which when activated, allowed the Metarex to hear and see everything that she did.

After the attack, Cosmo escaped into a ship and arrived on Sonic's planet. Tails, Cream and Amy were the first to find her and they questioned her arrival. Cosmo told them that she was looking for the "legendary hero that can use the Chaos Emeralds, Sonic the Hedgehog." She refused to tell them any more. Later, while in Tails' jet, the X-Tornado, she spotted Sonic and hopped out to greet him. Cosmo pleaded for Sonic to help her.

Sonic agreed to help her and he, Cosmo, Tails, Knuckles, Amy, Cream, Cheese and Christopher Thorndyke, who recently arrived on Sonic's world, began traveling through the universe in Tails' new space ship, the Blue Typhoon in search of the Chaos Emeralds which Sonic scattered through the universe during his first battle with Dark Oak.

Later in the series, Shadow raided the Blue Typhoon and attempted to kill Cosmo, as he believed her to be a spy for the Metarex, but Cosmo's friends managed to keep her safe especially Tails, who endeavored to keep her safe, to the point of almost being knocked unconscious. Before Shadow could do Cosmo any harm, a Metarex broke in and interrupted the fighting. Dark Oak called Cosmo "White Seed" and praised her for completing her mission. Cosmo then remembered that before she escaped from her space colony, the Metarex were planning to use her as a spy.

Chris and Tails managed to locate an invisible signal and found that it was attached to her brain; if they removed it, Cosmo's hearing and sight may have been lost in the process. In the English version Knuckles said that it would have been best to do that, but Tails refused to harm Cosmo. In the Japanese version, however, Knuckles yelled at Tails that there had to be a way to remove it without hurting Cosmo, to which Tails yelled back that he had no idea how to do both, assuming it was possible.

Later, in the English version, Cosmo learned that she could hear the Metarex in her head and fell into deeper despair. While she was disheartened, Chris told Sonic that he now understood why Cosmo was able to understand the Metarex language.

In episode 74, Cosmo tried to run away but was stopped by Tails. Their friends then showed up and said they were determined to defeat Dark Oak instead of risking Cosmo's hearing and sight. In episode 77, Cosmo sacrificed herself by fusing herself with the Dark Oak planet to make it weaker so that Tails, Super Sonic and Super Shadow could destroy it and save the universe. At first, Tails refused to, but Cosmo convinced him that it was the only way to save the galaxy. Tails trusted Cosmo and ended up shooting her (while yelling that he loved her while doing so in the Japanese version) with the Sonic Power Cannon, causing her to be killed in the process (in the ending credits, she says to Tails that she loves him, while in the dub she says she'll never forget him). According to the Japanese version, in an attempt to rescue Cosmo from death, Super Sonic and Super Shadow used Chaos Regeneration, but all they managed to produce was a small seed. However, in the English version, Chaos Regeneration is not used and Cosmo implies that the seed is her child. In episode 78, when Sonic arrived back on board the Blue Typhoon, he handed the seed to Tails, who collapsed with grief as he realized that Sonic was unable to save Cosmo. However, the seed sprouted in the end, meaning that resurrection of Cosmo could be possible.

Cosmo does have a few abilities, being a plant herself, such as having the ability to empathize with plants, trees, or the planet and determine their state of life. Cosmo can jump high and gently float down with the aid of her skirt. She also appears to be able to unlock the power of a Planet Egg, as demonstrated in episode 58, where she caused the Planet Egg to activate and grow vines that entangled Dr. Eggman's machines, but also her friends and herself due to her lack of control over the vines.

In episode 59, Cosmo has demonstrated some sort of agility as shown when the Chaotix were about to leave and kidnap Cream with a sack, she quickly rolled next to Cream letting herself get captured along with Cream and later on when Vector and Cosmo get into a fight, she is able to avoid his attacks with speed. She also shows heavy endurance as she is able to recover from powerful attacks quickly as seen in episode 58 where she quickly arrived back to attack a Metarex with fruits after being sent flying into the air by a heavy branch shaped like a club. She is able to read and decipher the Metarex language (most likely given to her when the Metarex implanted the signal while she attempted to escape)

When Cosmo is in her transformed state, she is able to turn into a tree and weaken other planets. 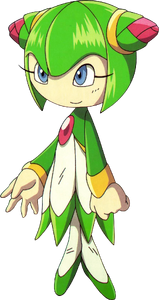 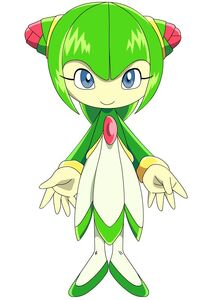 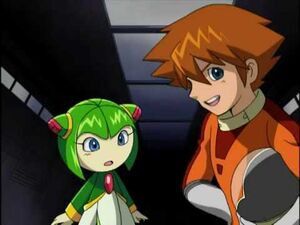 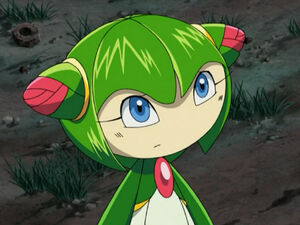 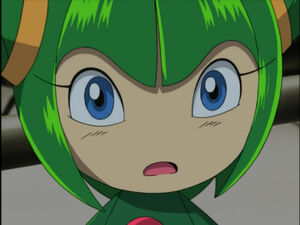 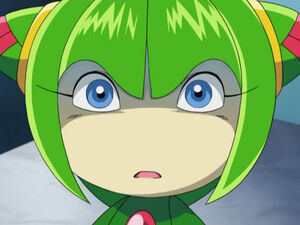 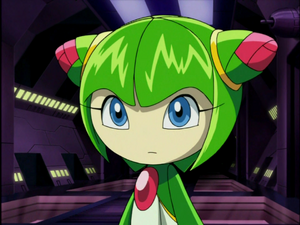 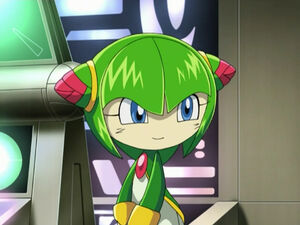 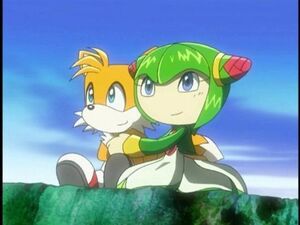 Tails watching the moon alongside Cosmo. 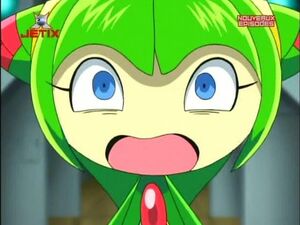 Retrieved from "https://hero.fandom.com/wiki/Cosmo_the_Seedrian?oldid=2168402"
Community content is available under CC-BY-SA unless otherwise noted.