Count Duckula is an recurring antagonist from Danger Mouse and the titular main protagonist in the spin-off series of the same name.

Count Duckula first appeared in a Danger Mouse episode called "The Four Tasks of Danger Mouse" where he was an evil antromorphised vampire duck who looked like he had no fangs, but they could sometimes be seen. He wore a medallion with the letter "D" on it and spoke with a lisp like voice. He was a villain who wanted to be famous, but Danger Mouse was not too impressed and the two had a huge clash. Most of his evil schemes were set to make sure he was in the spotlight. He even teamed up with DM's arch enemy Baron Silas Greenback on one occasion, however thanks to Danger Mouse it always failed. He appeared in four episodes through out the run of the series.

In this series, it was revealed that Duckula came from a long dynasty of vampire ducks and had been killed several times and brought back to life again. So the previous Count Duckula from Danger Mouse may have been killed before the spin off.

In the intro Igor (his butler) and Nanny (his housekeeper) were attempting to bring him back by pouring blood into his awakening casket. But Nanny gave Igor a bottle of Tomato Ketchup by mistake making this new Count Duckula a vegetable loving, blood hating and show business crazy vampire duck who definately had no fangs.

He uses his spooky ancestrial home called Castle Duckula to teleport to many different places around the world to seek fame and fortune, but it didn't always go according to plan.

In Danger Mouse, Duckula was a villain who was proud to be a vampire duck, had a lisp in his voice and occassionally stuttered. He could transform most surprisingly into a baseball bat with wings and he uses his appearing and disappearing in a flash of smoke ability that can even change his clothes. His main goal was to be famous and have his own show where he could show his horribly bad performances such as acting and singing. He often used force and blackmail.

In Count Duckula, his lisp was gone, but he had the same goal to be famous and get rich, unlike his predessesor however he tries to get it the more honest way. He hated being a vampire and never wanted to become one even though he is constantly lectured by Igor about his ancestor's legacy (He even travelled through time to change his legacy in one episode) and hates his castle being so gloomy, dark and spooky. This leads to him wanting to explore the world.

He's cowardly and often screams with rage when things don't go according to plan. He is constantly annoyed with Nanny either when she goes through a wall, breaks the castle door or misunderstands everything he says.

Duckula has a good heart and always tries to help people but it mostly ends with them hating him. He can survive in sunlight even though his previous persona couldn't, however in one episode a stone version of himself crumbled to pieces when exposed to the light.

He also likes making jokes, but despairs when the people he tells them to doesn't understand them.

He has the abilities of any vampire duck such as no reflection in a mirror and can disappear into a thick raincloud. He can also be killed by a wooden stake or by garlic (although it is only mentioned three times in the series).

He has a fondness for broccoli sandwiches and other vegetables. Even though he was different than his predessesor from Danger Mouse many viewers got to know and love this vegetarian vampire duck. 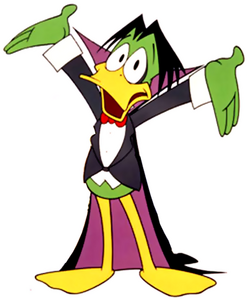 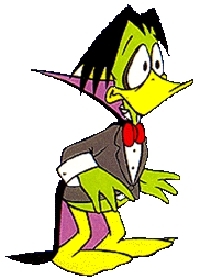 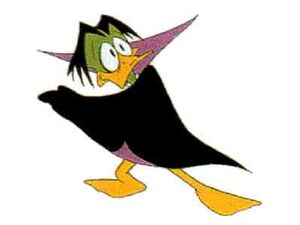 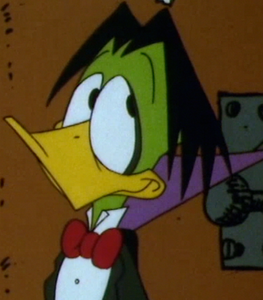 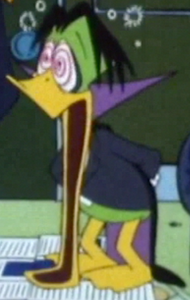 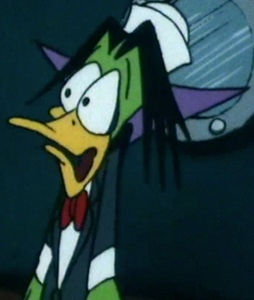 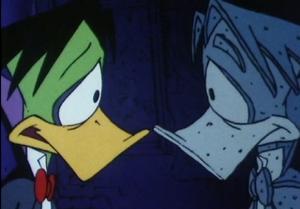 Duckula facing his stone self 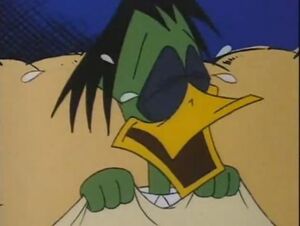 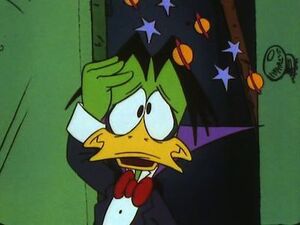 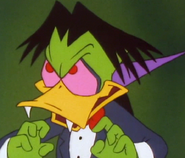 Add a photo to this gallery
Retrieved from "https://hero.fandom.com/wiki/Count_Duckula?oldid=1660874"
Community content is available under CC-BY-SA unless otherwise noted.