Shooting Sparks from his eyes (only in "Pandemic 2: The Startling")

Craig Tucker is a member of the boys' fourth grade class and the boyfriend of Tweek Tweak as of the episode "Tweek x Craig". He is a troublemaker and is known for often flipping people off. He owns a guinea pig called Stripe.

He is voiced by Matt Stone.

Craig wears a blue jacket and a matching blue chullo hat with a yellow puffball on top. He wore yellow mittens in "How to Eat with Your Butt". In the early seasons of the series, he wore blue jeans, but in more recent seasons, he wears high-waisted black pants. The fact that his legs are longer is clearly visible in "South Park is Gay!", where he and three other boys from his class wear identical clothes, because Craig's pants appear much longer than the others. Underneath his hat, Craig is shown to have short black hair (similar to Stan Marsh).

In "T.M.I.", it's listed that he has grown the most in height out of all the boys, along with Kenny and Kyle, all three gaining 2.4 inches. This implies he may be one of the tallest (if not, the tallest) boys in the class, especially since he appeared to be taller than the others even before his growth. One of the reasons he may be tall is that both his parents are shown to be the tallest adults in the town.

Craig seems to be one of the most cynical, stoic, deadpan kids from his class, having a darker personality than the rest of the characters, a trait exaggerated by his deeper-than-average voice. He has been described as pragmatic, monotone and ironic.

Craig is implied to have bad behavior, and is referred to as "the biggest trouble-maker" in his class by Eric Cartman in "Tweek vs. Craig". Craig has a habit of flipping people off, sometimes to express irritation, anger, or disdain towards them, sometimes as a reflex. This is a trait the official South Park website states is learned from his family, who are all seen flipping each other off in "Tweek vs. Craig". His habit of flipping people off has been shown much less in later episodes, although a later incident regarding flipping off the principal of school ended up with him in detention. 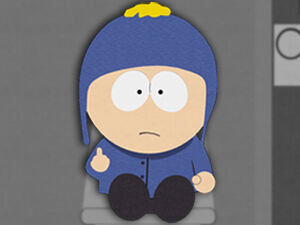 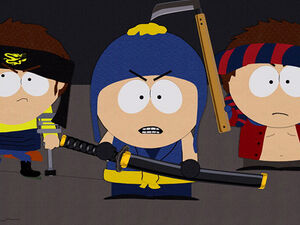 Craig as a ninja 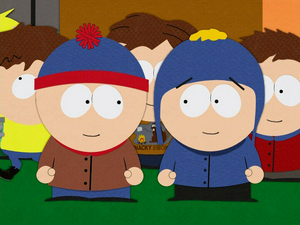 Stan and Craig smiling at each other 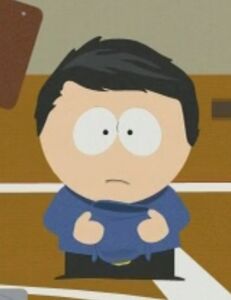 Craig with his hat off 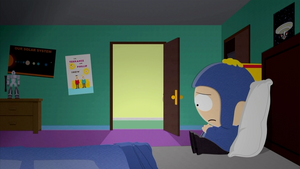 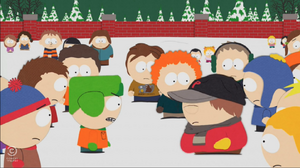 Kyle threatening to kill Cartman for infecting him with his HIV virus. 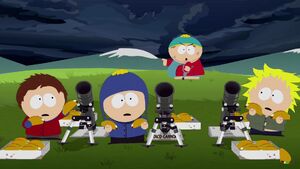 Retrieved from "https://hero.fandom.com/wiki/Craig_Tucker?oldid=2155643"
Community content is available under CC-BY-SA unless otherwise noted.