Master Crane is a member of the Furious Five and one of the main characters of the Kung Fu Panda franchise.

Crane is the most of the Furious Five. He’s also considered to be the pragmatist of the group. He will always try to avoid and defuse conflicts between the members of the five whose differing personalities often conflict. He’s a think first, attack second kind of bird. He’ll try to avoid a fight, if at all possible… but if he can’t avoid it; he’ll do everything he can to win it. The safety of his fellow Kung fu-ers is his first priority. He’s willing to risk his life to protect them. Crane is kind of the most sensible of the Five, knowing what to do right. Crane specializes in Fujian White Crane Kung Fu. His fighting style is natural, graceful, effortless, simple, floating and balanced. He doesn’t use his long beak, instead, he utilizes his wings for big, circular sweeping movements designed to exploit his wingspan; by enlarging the striking zone, and he diffuses his opponents’ energy – using 4 ounces of energy to deflect one thousand tons of pressure.

During combat situations in dangerous locations where fatal falls are possible, Crane is able to fly around the combat zone and the area for tactical advantage, ready to catch any of his comrades if they do fall. Adding to that, he’s able to carry and fly the rest of the Furious five, but this shows to be very taxing for him. This makes Crane one of the strongest. His species is a Japanese Crane.

He is voiced by David Cross in the feature films and in the cartoon series, Kung-Fu Panda: Legends Of Awesomeness, by Amir Talai. In the Japanese dub from the movie, he is voiced by Mitsuaki Madono.

Crane has demonstrated a dry sense of sarcastic humor on occasion. In his spare time, he enjoys practicing the ancient art of Chinese calligraphy, especially as a way to meditate or wind down after a stressful day. Though brave and reliable, he also tends to show more nervousness than his companions. 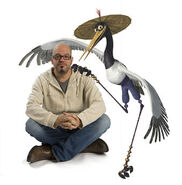