Crazy Frog, originally known as The Annoying Thing, is a computer-animated character created in 2003 by Swedish actor and playwright Erik Wernquist. Marketed by the ringtone provider Jamba! (later known as Jamster), the animation was originally created to accompany a sound effect produced by Daniel Malmedahl in 1997 while attempting to imitate the sound of a two-stroke engine.

Annoyance Inducement - The user can induce a state of annoyance in others, ranging from annoying, distracting, enraging, (literally) maddening, etc. Most users are able to drive their opponents to levels off distraction where they are easy to defeat or surrender simply to get away the user. Some may even opt to suicide.

Amphibian Physiology - User with this ability either is or can mimic/transform into amphibians, including toads, frogs, caecilians, and salamanders.

Enhanced Agility - User with this ability can go from one motion to another effortlessly, effectively dodge attacks, swing from things easily, sprint, do back-flips, leap across rooftops, and numerous other gymnastic, athletic and martial implements with little to no effort. Agility is "the ability to rapidly respond or change by adapting its initial stable configuration", the ability to change the body's position efficiently, and requires the integration of isolated movement skills using a combination of balance, bodily coordination, speed, reflexes, strength and endurance. 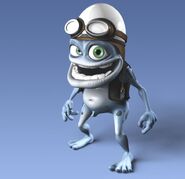 Add a photo to this gallery
Retrieved from "https://hero.fandom.com/wiki/Crazy_Frog?oldid=1750011"
Community content is available under CC-BY-SA unless otherwise noted.