The Creeper (real name Jack Ryder) is a fictional character, a superhero created by the late Steve Ditko for DC Comics. He is portrayed as a former talk show host dressed in a wild costume with a green, yellow, and red color scheme. He is characterized by super strength, agility, and stamina; a healing factor enabling him to heal from virtually any wound; physically painful laughter; and proficiency with martial arts. Most of his physical powers and abilities are the results of effects from serums and devices invented by scientist Dr. Vincent Yatz.

The Creeper first appeared in Showcase #73 (March 1968). He later spun off into two brief series, one written by Dennis O'Neil in 1968 and another written by Len Kaminski in 1997 and 1998. In the interim, he was kept alive with sporadic appearances in solo runs and guest shots. His last comic appearance was in a six-issue miniseries written by Steve Niles in 2006. He also appeared in television shows like The New Batman Adventures and Batman: The Brave and the Bold, as well as the Batman Arkham video game series.

The original story tells about Jack Ryder, a Gotham City talk host who tries to save a scientist named Dr. Yatz from mobsters. An attempt to sneak in to the boss' mansion in probably one of the weirdest outfits ever, where Dr. Yatz was held during a masquerade, only got Ryder wounded and saved by Dr. Yatz who implanted him with a device that could make his costume disappear and with a serum that gave him super strength and agility, as well as the power to heal almost instantly. It's also mentioned that his laughter makes people nervous or is even physically painful. Ryder could activate the suit (and apparently the superpowers, too, since he mentions not being so fast and strong in his normal form) whenever he wanted with a button-like object.

The Creeper possesses superhuman strength, stamina, reflexes and agility, and is a powerful, if disorganized, hand-to-hand combatant. He has a very powerful healing factor allowing him to recover from even deadly wounds quickly and with no apparent ill effect. He appears to possess some limited awareness of the fourth wall. 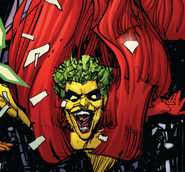